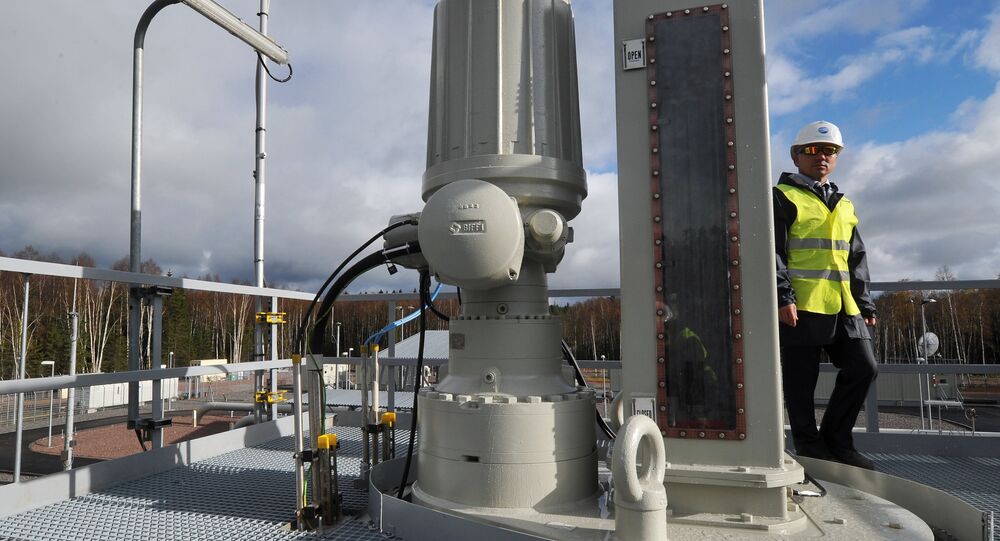 Regardless of growing anti-Russia sentiment in Europe and the US, the Old Continent is increasing its purchases of Russian natural gas. Meanwhile the country's energy company Gazprom is pushing ahead with its bold infrastructural projects as global consumption of gas is expected to grow dramatically in the coming decades.

Russia is steadily expanding its deliveries of natural gas to Europe with Gazprom setting a new record in the production and supply of hydrocarbons in the first quarter of 2018.

"According to preliminary results of Q1 2018, an absolute monthly record of 19.6 billion cubic meters (bcm) was set for gas supplies in March to the Far Abroad countries. The previous record of 19.1 bcm was set in January 2017," Gazprom Export reported on April 3.

Within this period the Russian energy company had increased its year-on-year supplies to Germany by 12.2 percent, to France by 11.1 percent, to Austria by 83.5 percent, to the Netherlands by 127 percent, to Finland by 15.5 percent and to Greece by 36.4 percent.

Additionally the gas giant has stepped up its production of hydrocarbons: In March 2018 the company produced 46.5 bcm, which was higher than in January and February this winter and 20.5 percent more than in March 2017. "This is the maximal volume of gas production for this month over the last six years," the company's official website highlighted.

© Photo : Nord Stream 2
US Interested in 'Fueling Conflict' Over Nord Stream 2 - German MP
In total, from January to April 2018, Russia's natural gas deliveries exceeded 70 bcm prompting observers to suggest that in 2018 the country would sell more than 200 bcm, beating an absolute record in the history of Russian gas exports, including during the Soviet period.

Almost 30 countries are currently buying Russian natural gas with three-quarters of the supplies going to EU countries, which, despite the worsening political climate, are actively increasing their purchases.

© Photo : Nord Stream 2
Pipes are loaded onto a vessel in the northern German port of Mukran for transshipment to a storage yard

There are several possible reasons behind this phenomenon, according to Sputnik contributor Maxim Rubchenko: First, the abnormally cold winter and spring prompted EU member states to intensify their purchases of Russia's natural gas; second, it could be partially triggered by Norway's problems regarding the Skarv oil and gas field in the Norwegian Sea.

Third, the export of hydrocarbons from Libya has de facto stopped due to difficulties on the Greenstream gas pipeline. Fourth, Algeria was forced to cut shipments, as its gas price has soared due to the fact that it is closely tied to crude prices that have risen substantially over recent months.

Demand for Natural Gas on the Rise Worldwide

In the medium term, the demand for Russian hydrocarbons in Europe will continue to grow, as the Old Continent's own production capabilities decline. For instance, the Dutch government signaled in late March that it would decrease production at the Groningen gas field to 12 bcm a year by 2022, and to zero by 2030.

Meanwhile, the International Energy Agency (IEA) predicts that between 2015 and 2040 pipeline and liquefied natural gas will come out on top among other energy resources in terms of consumption. It envisages demand increasing significantly in Europe, the Middle East and Asia.

Given the aforementioned trend, it is hardly surprising that Gazprom is not sitting idly by but actively developing its pipeline infrastructure, including Nord Stream 2, Turkish Stream and Power of Siberia.

Despite threats and protests from Ukraine, Poland and the US, the Russian-European Nord Stream 2 endeavor has gone full throttle: Having gained construction permits from Germany and Finland, Gazprom expects that Sweden and Denmark will give it the green light by June 2018.

According to Gazprom Export's April 30 report, "the deep-water pipelay for Line 1 of the Turkish Stream offshore gas pipeline has been completed."

"Since 7 May 2017, when we started the pipelaying campaign, the total of 1,161 km of pipes has been laid, which is 62 percent of the overall gas pipeline length," said Alexey Miller, chairman of the Management Committee of Gazprom PJSC.

© Photo : turkstream.info :
Russia's Turkish Stream Will Help Italy Re-emerge as European Gas Hub – Analyst
On the other hand, the company highlighted on March 21, 2018, that the linear part of the Power of Siberia gas pipeline, which will allow Gazprom to provide natural gas to both domestic consumers in Russia's Far East and the Chinese, had been completed by 75.5 percent.

However, it appears that the three pipeline projects will not be enough, as the Russian energy giant hinted in April 2018 that it did not rule out the construction of Nord Stream 3.

"We have confirmed reserves, we have transport and we are building new transport routes. If Europe tells us what it needs and is ready to sign the pertinent contracts, I'm not ruling out that we might need new gas pipelines, like, for example, Nord Stream 3," Gazprom's board chairman, Alexander Medvedev, told Rossiya-24.

It seems that neither Washington's threats toward European companies collaborating with the Russians to severe sanctions in accordance with the Countering America's Adversaries Through Sanctions Act (CAATSAA), nor the recent poisoning case in the UK involving former spy Sergei Skripal and his daughter Yulia could affect EU business strategy because money talks louder than politicians in Washington, Brussels and London.