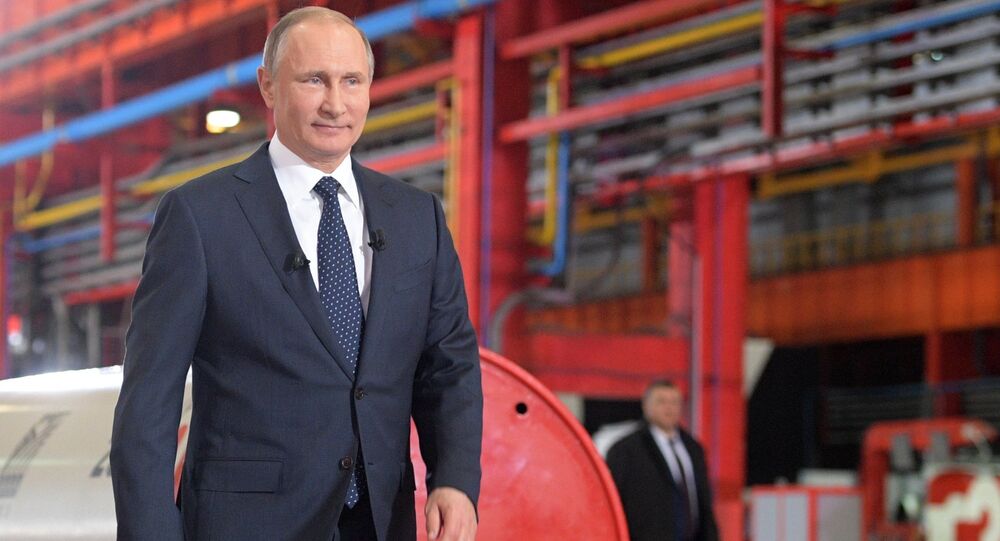 Regardless of Ukraine's vocal protest at the construction of Nord Stream 2, Germany and Finland have already given a green light to the pipeline project. At the same time, Washington's threats to subject EU firms to sanctions over the Russia-European initiative have failed to stop the implementation of the project.

Ukraine's efforts to prevent the implementation of Nord Stream 2 appears to be nothing more than a tempest in a teapot as the project continues to move forward.

On April 5 Ukraine's Verkhovna Rada adopted a resolution "on the inadmissibility of construction of the North Stream 2 gas pipeline and the Russian Federation's monopoly on the gas markets of the world" calling upon the international community to step in and take measures.

"The aftermath of the project goes far beyond the limits of just commerce or internal affairs of the EU countries, and will lead to an energy crisis, economic and political destabilization of Europe as a whole," the document claimed.

However, the same day the Finnish government granted its approval to the construction of the pipeline, which would go about 375 kilometers through Finland's economic zone in the Baltic Sea. Earlier, on March 27, Germany gave a green light to Nord Stream 2 AG, the operator of the Nord Stream 2 project.

© Sputnik / Alexey Kudenko
Nord Stream 2 Not to Divide EU Energy Market Fundamentally as It's Already Divided - Scholar
In the coming months the construction works should be endorsed by Denmark, Russia, and Sweden.

The European Commission has seemingly lent its sympathetic ear to Kiev's plea by stating Friday that the EU does not support the Nord Stream 2 project, but abstained from imposing any sanctions on the endeavor.

For his part, Lithuania's Energy Minister Zygimantas Vaiciunas showed his full support to Ukraine's position during his recent visit to Kiev.

Speaking to Baltic News Service (BNS) Vaiciunas claimed that Nord Stream 2 was nothing short of Russia's geopolitical project, which should not become reality. He further opined that the endeavor should be subjected to the so-called "third energy package" — the bloc's internal rules for the EU gas and electricity market.

© Sputnik / Sergey Guneev
'Totally Political': Analyst Explains Why EU Opposed to Nord Stream 2 Pipeline
However, in early March 2018, a legal service of the Council of the European Union rejected an EC proposal to extend the third energy package rules to the Russia-led endeavor, referring to the fact that the EC initiative would contradict the United Nations Convention on the Law of the Sea.

In addition to the Baltic States, Poland has repeatedly called upon Washington to nip the pipeline project in the bud.

Washington echoes Ukraine, Poland and the Baltic States' stance. During the April 3 meeting with the presidents of Lithuania, Latvia and Estonia in the White House, Donald Trump lambasted Germany for its support to Nord Stream 2.

"Germany hooks up a pipeline into Russia, where Germany is going to be paying billions of dollars for energy into Russia. And I'm saying, 'What's going on with that? How come Germany is paying vast amounts of money to Russia when they hook up a pipeline? That's not right'," Trump said.

Previously, on March 21, US State Department spokeswoman Heather Nauert said that the White House opposed the Russia-led project as "it would provide Russia another tool to pressure European countries, especially countries such as Ukraine."

She dropped a hint that Washington may impose sanctions on European firms involved in Nord Stream 2, referring to the Countering America's Adversaries Through Sanctions Act (CAATSA), signed by Trump into law on August 2, 2017.

"We don't tend to comment on sanctions actions but we've been clear that firm steps against the Russian energy export pipeline sector could — if they engage in that kind of business — they could expose themselves to sanctions under CAATSA," Nauert said.

© Sputnik / Mikhail Klimentyev
Ex-German Foreign Minister Gabriel Under Fire for Supporting Nord Stream 2
Still, it seems that Germany does not attach much importance to US threats.

According to the media outlet, politicians from Merkel's coalition "ridiculed" Trump's words, suggesting that by cracking down on Nord Stream 2, the US president was apparently trying to promote America's liquefied natural gas in the EU market.

"After his [Trump'] unsuccessful attempt to impose punitive tariffs on steel and aluminum in Europe, he ignites the next stage of escalation in order to safeguard national export interests," Timon Gremmels, a German parliamentarian told the media source.

© REUTERS / Nord Stream 2
US Threatens Sanctions Over Nord Stream 2 Gas Pipeline
Given Germany's confidence and determination to implement the project, which will make the country Europe's influential energy hub, Ukraine's efforts will most likely prove futile.

As Sputnik contributor Dmitry Lekukh suggested in his recent op-ed, the major addressee of Kiev's vocal protests over Nord Stream 2 is Ukraine's population.

"The appeal of the Kiev leadership to the world is in fact a tool to draw an alternative reality for the internal audience. In this alternative reality, [Kiev] is fighting against the eastern 'aggressor' [Russia] and usually wins," Lekukh remarked ironically.