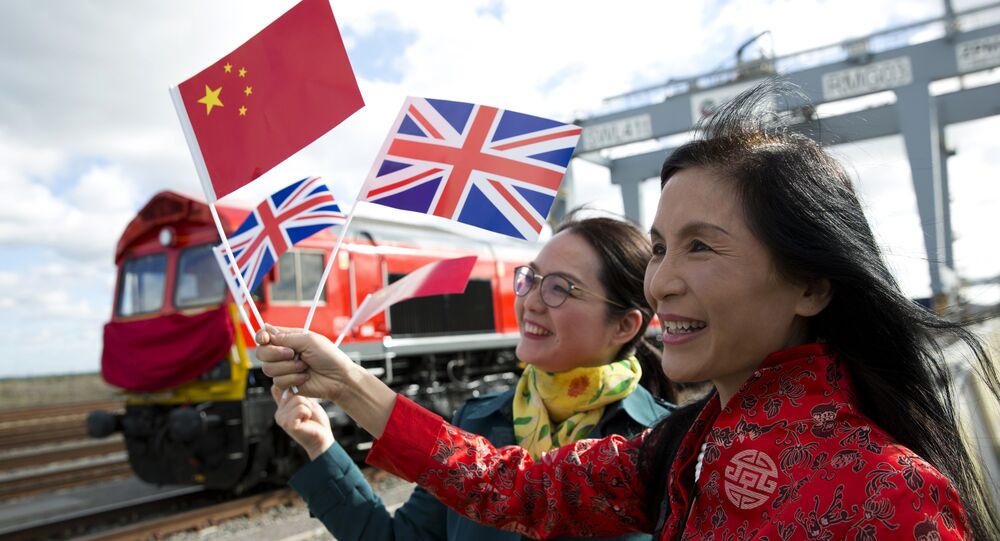 The first rail freight service from the UK to China departed April 10, carrying 30 containers of British-produced goods from Stanford-le-Hope in Essex, along a 7,500-mile journey to Yiwu, China. Hailed as a victory for an independent Britain, the voyage instead arguably represents a shift in the balance of world economic power, from East to West.

Cheaper than air and faster than sea, along the way, the consignment will pass through the Channel Tunnel into France and on to Belgium, Germany,Poland, Belarus, Russia, Kazakhstan, before finally reaching China April 27. The cargo is said to contain a number of items, including whisky, soft drinks, vitamins, pharmaceuticals and baby products.

The first freight service from China to the UK arrived in Essex in January, making the country the 15th to join Beijing's rail link, dubbed the "New Silk Route."

The original Silk Road was a trade network connecting East to the West 2,000 years ago, stretching from China to the Mediterranean Sea.

The ambitious plan was originally unveiled in September 2013, by President Xi Jinping, as part of part of the country's "One Belt, One Road" program.

However, while the shipment was hailed by UK International Trade Minister Greg Hands as a "boost" for "global Britain," symptomatic of "the huge global demand" for the country's goods, the journey is in fact not a testament to the UK's enduring economic and political relevance in the 21st century, but shifting geopolitical tectonics, and China's inexorable rise to superpower.

The final containers being loaded onto the @DBCargoUK train, before it departs for Yiwu, China. pic.twitter.com/shPnPWCqwR

As many observers have noted, since 2000 China has steadily restructured the world's financial architecture, displacing the monopoly of the US dollar and eroding the primacy of the Bretton Woods system, which cemented the US as a Western hegemon in the mid-20th century.

The New Silk Route is primed to become the "backbone of the global economy," and shift the center of global power from East to West.

As a demonstration of this paradigm shift, Europe is said to be eyeing its own Silk Road, a Danube-Morava-Vardar waterway connecting the North and Aegean seas — but requires Chinese funding to achieve the project.

With an increasing prominence in world trade, China takes a leading role in developing and setting international standards, "reformatting the rules of the game," and having a significant impact on how other countries conduct their economic affairs, both national and international.

Great Britain fulfilled this role for centuries — but today, UK leaders treat the Chinese government with deference in their quest to secure overseas capital investment, quick to stifle criticism of Beijing's human rights record lest such talk offends their new benefactor. When President Xi visited the UK in 2015, a former "influential" US official dubbed the trip a "case study in kowtow."

"It's not just Chancellor Osborne, it's the whole Cameron government that is bending over incredibly backwards," they said.

Such a state of affairs is a far cry from Britain's first interactions with China, in the 18th century. Attempting unsuccessfully to open up China to Western trade, merchants opted to flood China with cheap opium in order to extract the region's riches for themselves, subsequently fighting two brutal wars against the ruling Qing dynasty to secure the "right" to sell the highly addictive substance to Chinese citizens, despite millions dying from their addictions.

Then, the problem for Western traders was the Chinese were uninterested in any of their goods, bar silver.

While modern China evidently craves a wide variety of Western products, the days of European powers being able to use brute force to break down trade barriers with China are long gone. Instead, the goods that can and will be exported to China in the 21st century will be dictated solely by the country's leaders — as will the prices that are paid, and the terms of their export. Likewise, former Western powers will have to accept that in their relations with China they are destined to be junior partners at best, and supplicants at worst.