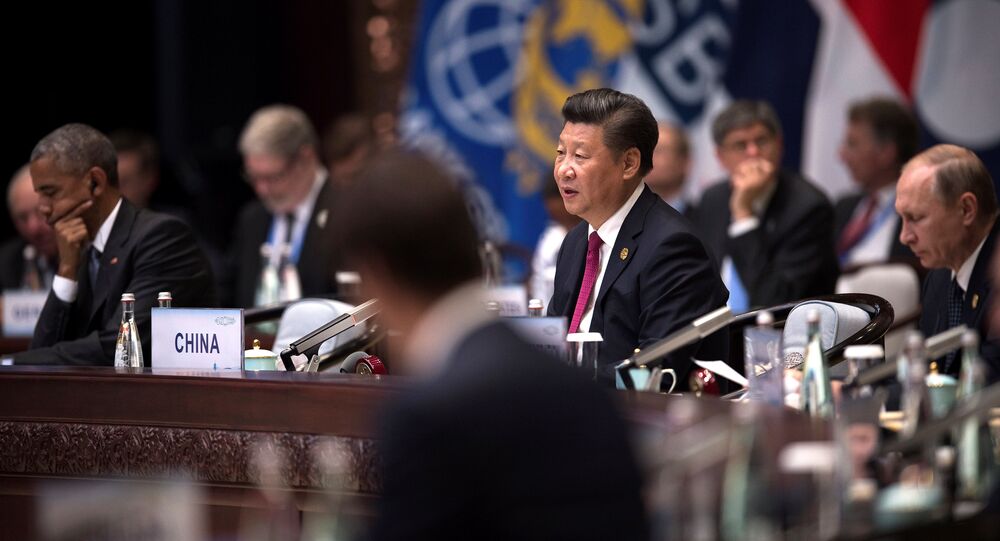 Although China and BRICS do not aim to fundamentally reshuffle the Western-led global order, by all accounts, Beijing intends to "reformat" the rules of the game with the use of new innovative instruments, approaches and a new reserve currency, to revive the global economic growth.

Beijing's intention to create new unified rules of the international investment activity against a background of the inclusion of the yuan in the IMF's basket of reserve currencies appears to be early signs of the upcoming "overturn" of the Western-dominated economic order, according to Viktoria Panova, Director of Oriental Studies Institute at the Far Easter Federal University.

"By all accounts, China is seeking to reformat the rules of the game," Panova noted in her analysis for the Russian International Affairs Council (RIAC) think tank.

© REUTERS / Jonathan Ernst
Full of Promise, Obama's Pivot to Asia Ends With 'Slap in the Face'
She added that though it does not mean that the principles at the core of the rules would be absolutely new, Beijing is likely to use innovative instruments and a new reserve currency.

Panova referred to Russian President Vladimir Putin's remark, made in the course of the September press-conference in Hangzhou.

"This year, the Chinese presidency proposed that we concentrate on today's key questions. What are these questions? First is how to ensure faster economic growth. Yesterday's instruments, while they have not grown rusty, I hope, no longer produce the desired effects. I am referring to investment, which is subdued, trade, which is not growing, and other dimensions," Putin told journalists.

Indeed, the US-led World Bank Group and the New Development Bank (NDB) set up by the BRICS nations have recently inked a "memorandum of understanding to strengthen their cooperation in addressing global infrastructure needs," according to Xinhua.

"Signing this agreement enables our institutions to strengthen our collaboration. When the world's multilateral banks work closely together, and support development that promotes inclusive growth in low- and middle-income countries, the poor and the vulnerable benefit the most," World Bank Group President Jim Yong Kim said as cited by the media outlet.

Panova called attention to the fact that the participants of the G20 Summit in Hangzhou have once again confirmed their commitment to the WTO's (World Trade Organization) basic principles and rules, and the importance of a "non-discriminatory and inclusive multilateral trade system."

At the same time, the BRICS have called upon the International Monetary Fund (IMF) to complete the Fifteen General Review of Quotas that would allow the bloc's economies to increase voting shares and gain the right of veto and other preferences with respect to their real "weight" in the world economy.

© Sputnik / Sergey Guneev
Why Does China Want to Foster Political and Military Ties With Russia?
Despite a temporary slowdown, Beijing has demonstrated sustainable economic growth over the recent decades.

John Ross of the Chongyang Institute for Financial Studies, Renmin University of China, pointed out in his article for Global Times that "based on current exchange rate measures from 2007-2015, China contributed to 46.3 percent of world GDP growth, the US contributed 21.9 percent and India contributed 5.3 percent."

"The role of China as the main locomotive of global growth in the wake of the financial crisis is evident whichever of the two measures is used," he emphasized, highlighting that "the role of the Group of 7 (G7) in regards to world growth is now secondary and the center of gravity in world economic growth is in China and India, not developed economies."

"Since 2007, the whole of the G7 has contributed less to global growth than China alone," Ross underscored, arguing that the G20 does not only need China's key role in the global economy, but also China's thought leadership.

© AP Photo / Alexander F. Yuan
Silk Road Strategy: China Boosting Railways to Diversify Transit Lines
Panova noted that Russia is also interested in the upcoming change of the balance of power in the global economy: in addition to the fact Moscow and Beijing have certain similarities in their foreign policy approaches, the two countries have started little by little to boost their economic cooperation.

Russia and China have an enormous potential for collaboration in various spheres of economy and the Eastern Economic Forum in the Russian port city of Vladivostok is aimed at unfolding this potential, according to the Russian academic.

Assessing the results of the G20 Summit, Panova stressed "special hospitality" demonstrated by Chinese President Xi Jinping toward Russian President Putin as well as the bilateral US-Russian talks between Putin and US President Obama at the Summit.

"These two events are regarded as the clear sign that Russia has survived the Brisbane "cold shower" [the G20 Summit in Australia, 2014] and returned to the global arena as the winner," Panova underscored.