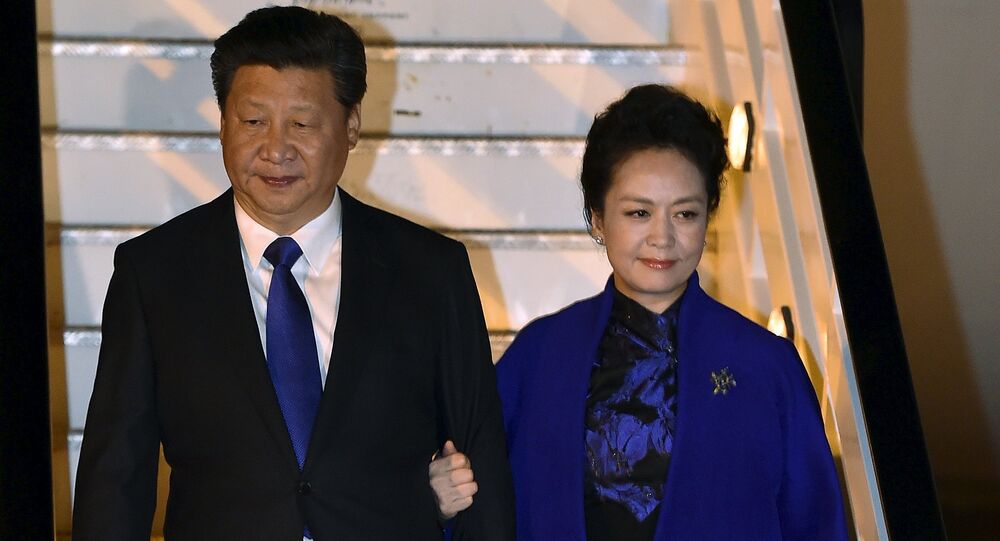 Britain’s lavish state reception for Chinese President Xi Jinping is a dash-for-cash that shows how desperate the crumbling former empire is for foreign investment.

British Prime Minister David Cameron is laying on the finest trappings of the state to impress his Asian visitor – even as it causes misgivings within British society and tensions in Britain’s “special relationship” with Washington. But Cameron has no choice. Britain is broke and badly needs capital investment.

The Daily Express reported how premier David Cameron and his Tory government are “rolling out the red carpet to beg for cash” during the Chinese leader’s first state visit to Britain. Meanwhile, the Financial Times gave prominence to critics accusing Britain of “kowtowing” to China.

President Xi and his wife were this week treated to a state banquet at Buckingham Palace, where the couple stayed as special guests of Queen Elizabeth. Throughout the visit, Cameron and his Chancellor George Osborne are to accompany the Chinese guests during the four-day itinerary.

Forget the British pomp and ceremony, gun salutes and royal indulgence. The bottom line is to secure billions of dollars-worth of investment that the British government is counting on the Chinese president to deliver.

© Flickr / clurross
US, China & TPP: 'As Much About Power in Asia as It Is About Free Trade'
“About 150 deals are expected to be sealed this week in areas such as healthcare, aircraft manufacturing and energy… Britain hopes to advance efforts to turn London into a key trading centre for China’s currency, the renminbi, and to boost trade with the world’s second largest economy,” according to the Guardian.

The showpiece investments being chased by Britain are those in nuclear energy and high-speed rail transport.

“Investment in infrastructure tops the UK government’s list of desired outcomes from this week’s state visit by Xi Jinping,” reports the Financial Times.

Some might say that this lavish reception is just the best of British hospitality afforded to the leader of the world’s second biggest economy. There’s nothing wrong, they say, with Cameron calling for a “golden era” in relations between Britain and China.

Certainly, Beijing seems to have warmly accepted the offer of a new strategic relationship in which Britain has placed itself as “the most important Western partner”. President Xi praised the British government for its wise choice of offering Beijing a strategic partnership.

Nevertheless, the dramatic appeal to China by British leaders has the unerring whiff of unscrupulous money-grubbing. Human rights campaigners and readers of Britain’s liberal Guardian newspaper are displeased at what they say is the Conservative government’s “hypocrisy” on the issue of human rights. Critics point to an alleged crackdown by Beijing authorities on media and civic groups, as well as the repression of dissent in Hong Kong.

We don’t have to agree with these critics in order to see that the British government is being far from principled, according to its own much-vaunted “British values”.

Previously, Britain has made protests about human rights and over Hong Kong in particular. Now, however, all that is being hushed up during President Xi’s visit – to the dismay of British rights campaigners.

Ironically, while Queen Elizabeth was entertaining President Xi, her son Prince Charles stayed away from the banquet at Buckingham Palace.

It has been speculated that he was making a veiled protest over China’s relations with Tibet, where Charles is a keen supporter of the Dalai Lama.

Even more fraught is Britain’s balancing act with the United States.

Just as Washington is sending a convoy of warships towards Chinese islands in the South China Sea, London is rolling out the red carpet for the Chinese leader.

© AP Photo / Xinhua, Gan Jun
Provocative Attempts: US Navy Prepares to Patrol in South China Sea
As the Financial Times quoted one former “influential” US official as saying: “What we are seeing is a case study in kowtow. It’s not just [British Chancellor] Osborne, it’s the whole Cameron government that is bending over incredibly backwards and this will definitely create problems for Great Britain in the future.”

Cameron has said there is “no conflict of interests” but it is unlikely that Washington will view Britain’s coddling of China in such an insouciant way.

For its part China has its own strategic calculations. By engaging with Britain, the Chinese government is no doubt happy to avail of new investment opportunities overseas at a time when its domestic economy is slowing. It also tends to mitigate American attempts at isolating Beijing. Good luck to China.

The point is that the whole affair shows a hypocritical expedience by the British state. Cameron and his government have been foremost in criticising Russia over alleged violations in Ukraine and human rights. On that score, London has been a cheerleader for imposing Western economic sanctions against Moscow, and dragging the rest of Europe to back Washington in a counterproductive stand-off.

© AP Photo / Jason Reed, Pool
Xi Says China Isn’t Trying to Replace US as the 'World’s Cop'
But when it comes to China, the same British government evidently has no such concerns or scruples. Because billions of dollars of Chinese investment are being courted by Britain to shore up its crumbling infrastructure and pump up its financial centre in the City of London.

So when David Cameron pontificates about the “best of British values”, we should know that chief among those “values” is hypocrisy. Followed by duplicity and unscrupulousness.

Cameron and his government no doubt think they are being really “smart” by playing such double-games. But in doing so, Britain exposes itself as being bereft of any principles. On the world stage, it is just a broken-down imperial has-been that now gets by with an oversized begging bowl and a posh accent.