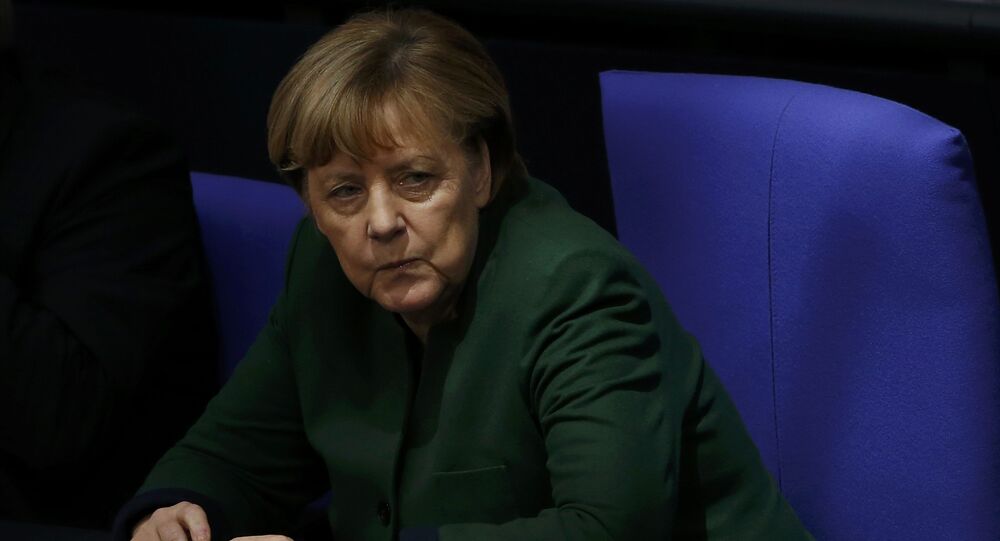 'Merkel the Anesthetist:' Why Germany Has Had Enough of Mutti's Medicine

Angela Merkel's leadership of Germany is like that of an anesthetist, who sends the patient to sleep and then administers her radical "cure" to an unsuspecting German society, Der Spiegel columnist Jakob Augstein wrote.

© AFP 2021 / TOBIAS SCHWARZ
Coming Round: German Politicians Praise Trump and Invite Him to Germany
On Sunday Angela Merkel ended months of speculation by announcing her candidacy for a fourth term as Chancellor, ahead of German federal elections which are scheduled to take place in autumn 2017.

In Germany's last federal elections in 2013, Merkel campaigned on a platform of continuity, telling voters "you know me," a tactic she seems likely to utilize again next year.

Earlier this year she assured Germans worried about the impact of almost 900,000 refugees and migrants arriving in one year, that continuity is assured.

"Germany will remain Germany, above all, that which we hold dear (will remain)," Merkel said.

However, her policies during 11 years in power do not warrant the tag of continuity, Der Spiegel columnist Jakob Augstein wrote on Thursday.

"The German welfare state, European unity, the relationship with Russia, the party system – nothing is the same as it was when Merkel came to power," Augstein said.

"One could make allowances for the Chancellor and say that she didn't cause these radical transformations. However, then one has to explain why Merkel should be able to control them in the future. Either way, things don't add up, and Merkel remains the great unknown even after 11 years in government."

Merkel gives the impression of stability, but this is only an image, and in reality she has destroyed aspects of German society and political culture which had been stable since the end of the Second World War, Augstein wrote.

"Merkel's disinterest in Europe, her neglect of social division, her aversion to Russia – Germany has already paid a high price for this Chancellorship, which gives the appearance of predictability and stability."

"'Dr. Merkel has opened a medical practice in the Chancellor's office, for political anesthesia. She operates only when the patient is asleep, and we are all the patient," he said.

Merkel is head of the center-right Christian Democratic Union (CDU), which governs Germany in coalition with its Bavarian sister party the Christian Social Union (CSU), and the center-left Social Democratic Party (SDP).

Merkel's policies at the head of this centralist coalition have damaged the credibility of the German political center ground, enabling more extreme political movements to thrive.

"The highest price is the damage to political culture. With Alternative for Germany, the right has been able to establish what all Union bosses before her prevented. The formerly vaunted politics of the center have cost us dearly, and hate has taken the place of argument."

"So, Angela Merkel is setting off again. But she is the cause of the problems which she now has to solve. How is that going to work? The Chancellor is pretending that she wants to go further out of pure selflessness. Thanks, but no thanks," Augstein concluded.

© AFP 2021 / Andreas Arnold
AfD Reveals 'Far-Right Extremism' With Controversial War Memorial
Alternative for Germany (AfD) was established in February 2013 in response to the EU's handling of its debt crisis, in which Merkel and Finance Minister Wolfgang Schauble played a key role.

This year the AfD has made significant gains in Germany's state elections, often at the expense of Merkel's CDU.

In regional elections in September in the north German state of Mecklenburg-Vorpommern the AfD received 20.8 percent of the vote, ahead of the CDU on 19 percent. In Berlin, the CDU trailed the SPD with just 17.6 percent of the vote, followed by the Greens, Die Linke and AfD.

In March the AfD also made significant gains in elections in three other German states. In Baden-Wurttemburg, Rheinland-Pfalz and Sachsen-Anhalt, the party received 15.1, 12.6 and 24.3 percent of the vote respectively.