On One Year Anniversary of 'We Can Handle This,' Merkel Admits Migrant Mistakes

"Change is not a bad thing," the German Chancellor said in an interview with the newspaper Suddeutsche Zeitung.

© REUTERS / Fabrizio Bensch/Files
Poll: 50% of Germans Oppose Fourth Term for Merkel Over Open-Door Migrant Policy
On August 31, 2015, German Chancellor Angela Merkel held a press conference at which she announced "we can handle this (wir schaffen das)," a phrase which has come to define her Chancellorship, and Germany's open-door migrant policy.

On the one-year anniversary of her announcement, Merkel told German newspaper Suddeutsche Zeitung that Germany has made mistakes in its migration policy. However, the chancellor declined to count her recent open-door migrant policy as one of them.

"We in Germany have ignored this problem for too long and neglected the need for a Europe-wide solution," Merkel said.

"Already, in 2004 and 2005 there were a lot of refugees, and we left Spain and others at the external borders to deal with it. And yes, then we were against a proportional distribution of the refugees."

Merkel said she "can't deny" that after taking a relatively large number of refugees from wars in the former Yugoslavia during the 1990s, Germany was relieved to leave migration problem for others to deal with.

"For a long time, we thought this issue did not affect us." Merkel said.

While appearing defiant in the face of criticism of last year's decision to open the country's borders to hundreds of thousands of refugees and migrants, Merkel did make reference to the challenge German society faces in integrating more than a million new arrivals.

"Germany will remain Germany, above all, that which we hold dear (will remain). But Germany has always been changing, since the foundation of the Federal Republic. Change is not a bad thing. It is a necessary part of life," the German Сhancellor said.

Merkel announced the open-door policy on August 31, a few days after a briefing from Germany's federal Ministry of the Interior had reported almost 7,000 migrants arriving daily in Germany, mostly via the Balkan migration route, and predicted a total of 800,000 arrivals over the course of the year. 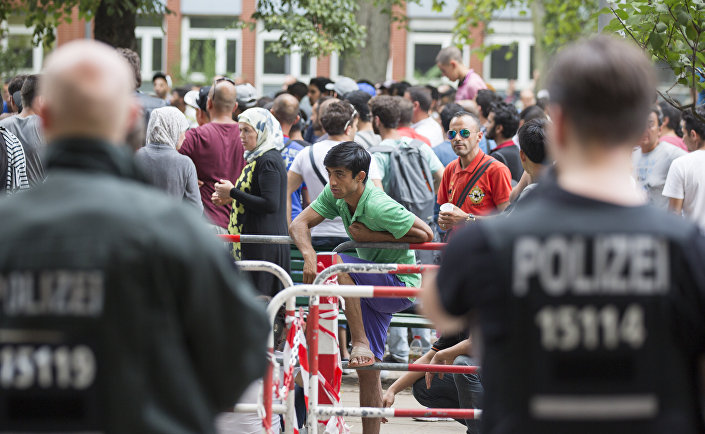 © AP Photo / Gero Breloer
Police stand next to asylum seekers waiting in front of the reception center for refugees in Berlin, Germany, Friday, Aug. 7, 2015.
While firmly maintaining Germany's commitment to open borders in the EU's Schengen area, that day the German Chancellor sought to assuage fears among ordinary Germans about the scale of the challenge.

"We – the federal government, states and municipalities – are in a position to do what is right and necessary," Merkel told the Germans, Tagesschau reported.

"Germany is a strong country.  Our motivation with which we go about these things must be: we have done so much – we can handle this!"

A few days later, on September 4, the governments of Germany and Austria opened their borders to thousands of migrants, who had been waiting in Hungary following Budapest's decision to halt trains traveling to Western Europe.

In the months that followed, Merkel was heavily criticized not just for the decision to open the country's borders, but for her associated public statements.

"Did Merkel have another choice? Hardly anybody criticized her decision that night," German newspaper Die Welt wrote in November 2015.

"However, there are many who don't understand why the Chancellor did not emphasize one thing: that there is a limit to the burden. Instead, she said things like this: 'The fundamental right to asylum from political persecution has no upper limit; that also goes for refugees who are coming to us from the hell of civil war,'" Die Welt wrote.

© Flickr / Stephen McGrath
Austria Headed for Germany Showdown Over 'Unacceptable' Migration Policy
Perhaps Merkel's rhetoric also resulted in an increase in economic migration from safe countries of origin, who according to the EU Commission comprised 60 percent of migrant arrivals to the bloc in December 2015.

According to figures from Germany's Federal Office for Migration and Refugees (BAMF) almost 2,300 Algerians and 3,000 Moroccans arrived in Germany that month. The number represented a sharp rise since August 2015, when less than 1,500 Algerians and Moroccans combined arrived in the country.

Outside Germany, the assumption that other European countries must share Germany's burden has also led to criticism for Merkel's decision to "handle" the migrant crisis. In October, Hungary will hold a referendum on the EU's demand that it accept a migrant quota, and the other Visegrad countries (Poland, the Czech Republic and Slovakia) have also expressed their opposition.

Some observers have also linked the UK's referendum decision to leave the EU with the open-borders migration policy advanced by Germany, with Der Spiegel commenting that "the images of columns of refugees coming towards Bavaria scared many Britons."

© REUTERS / Michaela Rehle
German police officers standing in front of migrants waiting to cross the border from Austria to Germany near Freilassing, Germany September 17, 2015.
"If even the disciplined Germans can't, or don't have the will, to control their borders, then who will be able to?" the magazine asked.

However, Merkel's course did win praise from the International Organization for Migration (IOM), who praised her "visionary" decision.

"I have the greatest admiration for Angela Merkel, and for her visionary and courageous decision to open Germany's borders to people fleeing persecution, poverty and conflicts from West Africa to the Bay of Bengal, and above all five years of continuing civil war in Syria," IOM Director General William Lacy Swing told Die Welt in January.

"We hoped that all 28 EU states would emulate her and take responsibility. They did not, but that does not weaken the admiration and praise for Merkel's correct decision. She is a visionary of open borders," Swing said.