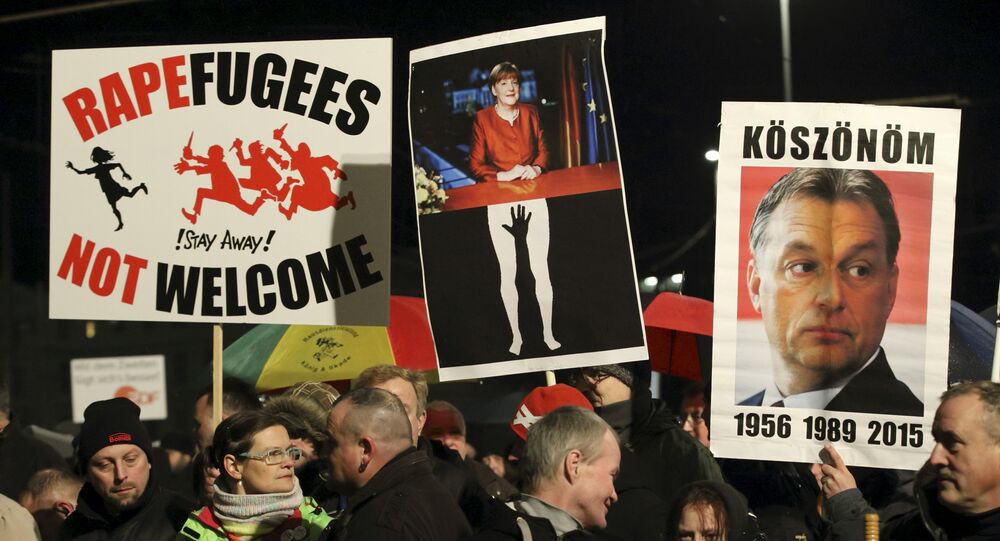 Public anger towards German chancellor Angela Merkel's refugee policies and allegations that police covered up sexual assaults on New Year's Eve in Cologne is increasingly visible on the country's streets.

On the anniversary of the xenophobic Pegida movement — which stands for patriotic Europeans Against the Islamisation of Europe — 3,000 supporters of an offshoot group, Legida, gathered in the eastern city of Leipzig to show their anti-immigrant stance.

Meanwhile, a group of 250 people, described by police in Leipzig as "hooligans" rampaged through the city torching cars and smashing windows and pledging to fight so-called "sex jihad."  Others waved German flags and held placards depicting Angela Merkel wearing a veil.

"These Muslim gangs declared war on us at the same time in Cologne, in Hamburg, in Stuttgart, in Bielefeld and other cities," Tatjana Festerling, member of Pegida told reporters.

"Under no circumstances should we dismiss these attacks, these harbingers of a sex jihad on women, as an isolated case. No, there's more to come, that was only the start."

© AP Photo / Michael Sohn
Merkel's Tough Stand on Migrants as Cologne Sex Attacks Near 400
Racial tensions are increasing across Germany, following the New Year's Eve sex assaults in Cologne by men described by the police as being of North African and the Middle Eastern descent. Meanwhile, officers are investigating a spate of attacks on foreigners by anti-immigrant extremists in retaliation for the events that took place on December 31.

"This is an alarming signal, which we are taking very seriously," a spokesman for Leipzig police said.

German ministers are calling for calm, warning people not to take the law into their own hands.

"As abominable as the crimes in Cologne and other cities were, one thing remains clear: there is no justification for blanket agitation against foreigners," justice minister Heiko Mass said.

© AP Photo / Juergen Schwarz
Poll Shows German Women Beginning to Oppose Idea of More Refugees
Public and political anger over the crisis in Cologne and the so-called "sex jihad" is spreading into other countries, not just Germany, whilst fueling anti-immigrant rhetoric among Eastern European leaders who are still refusing the European Commission's proposal for a shared migrant quota system.

Fico has called for an emergency meeting of EU leaders to discuss tighter border controls following the Cologne attacks. Meanwhile, the Polish government said it will refuse to take in young male asylum seekers.