Coming Round: German Politicians Praise Trump and Invite Him to Germany 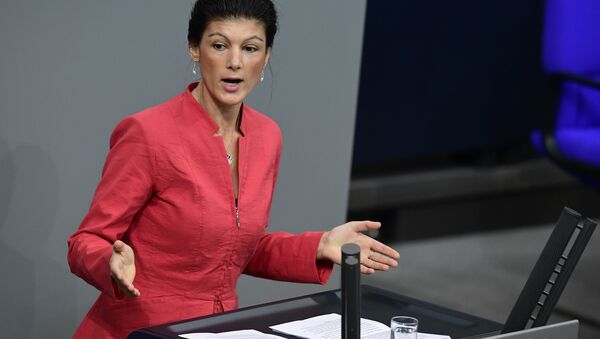 © AFP 2021 / TOBIAS SCHWARZ
Subscribe
Bavarian Prime Minister Horst Seehofer and Die Linke deputy chairman Sahra Wagenknecht have both come out in praise of US President-elect Donald Trump, in contrast to the official rhetoric from Berlin.

Lethal Weapons: German With Breast Implants Wins Legal Battle to Join Police
In contrast to much of the rhetoric from German politicians since Donald Trump's election as US President, two high-profile German politicians have spoken of their support for the President-elect's policies.

"In spite of everything the CDU and CSU are persisting with this Chancellor, are seriously looking forward with this woman Merkel," Wagenknecht said.

"People in this country can't look forward to that."

Wagenknecht criticized growing "social inequality and uncertainty" in Germany, which she said has led to more support for the right-wing Alternative for Germany party.

"It is their (the coalition's) common policy which has strengthened the right in Germany," said Wagenknecht, who said that the election of Trump should be a wake-up call for the German establishment too, which has neglected to provide for ordinary people.

Volkswagen to Slash 23,000 Jobs in Germany by 2020
Despite the booming German export economy, every sixth German retires in poverty, Wagenknecht said.

"In Germany too, ever more people have good reason to be disappointed and angry about the politics of the Grand Coalition, which doesn't take any more interest in their fears for the future."

Instead of austerity, the German government should be more like Trump and pledge to carry out a "large-scale program of public investment" to stimulate the economy and create jobs, Wagenknecht said.

"Do you think that this is what millions of vulnerable people and Europe's suspended generation have been waiting for? Apparently even Donald Trump has more economic policy understanding than you," Wagenknecht told the coalition.

According to sources in the Bavarian state parliament, Seehofer congratulated Trump on his election victory and said he "is always welcome in Bavaria." Specifically, Seehofer suggested the Munich security conference in February would be a good opportunity to visit the state.

Even before his offer, Seehofer exhibited a more welcoming attitute to Trump than several leading German politicians, who appeared less than enthusiastic about Trump's election victory on November 8.

Shocked Berlin Offers Olive Branch to Trump 'On Basis of Common Values'
Seehofer cautioned that Germany should "wait for practical actions from Trump's presidency," and immediately sent his congratulations over the Atlantic after Trump's win.

In contrast, Defense Minister Ursula von der Leyen spoke of her "huge shock" at the result, which she described as "not a vote for him but rather against Washington, against the establishment."

Foreign Minister Frank-Walter Steinmeier commented that "nothing will be easier. Much will be harder," under a Trump presidency, and said that "the result is different from what most people in Germany had hoped to see."

German Chancellor Angela Merkel, who faced sustained criticism from the US President-elect during the campaign as a result of her refugee policy, gave a conditional welcome to the next US president, on the basis of "shared values."

000000
Popular comments
Sahra Wagenkneckht and Die Linke generally are not eurosocialists in the sense that they grew out of the perfectly respectable and entirely comprehensible tradition of the DDR. We should do a deal with Die Linke to work in the European Parliament with their aligned MEPs. It's probably only possible if Moscow brokers the arrangement. We need something like Comintern, a way to make the difference millions are crying out for. As for idealogical quibbling, economic issues are not such a big deal. The central issue is national sovereignty and traditional values- the DDR had both, in fact. UKIP is a working class party- most of whom would have been solid DDR citizens back in the day- in another time, in another place. I have always prepared myself for such a deal, being very careful to see Trotskyism and its eurosocialist avatar as a deviation from the historic Socialism of the USSR and states like the DDR. The situation in Germany is sensitive for all sides- the Afd possibly problematic. I think there's room for Die Linke. No doubt the Russians have made a similar calculation.