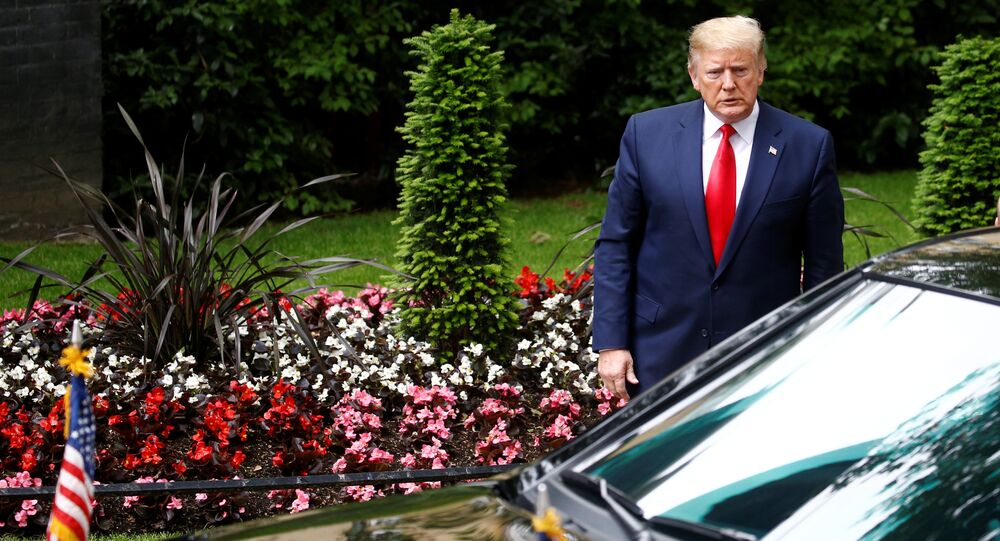 Donald Trump talks incessantly about “draining the swamp” in reference to political corruption and lies in America.

It is a constant commitment designed to shore up support among the poor and dispossessed who have suffered from broken promises and falling living standards for decades at the hands of the political elites who serve big business and the omnipotent and all-powerful military industrial complex which controls and runs America.

The truth is he has no intention of 'draining the swamp' because he has lived in it all his life alongside the millionaire and billionaire elites he calls friends. Far from draining the swamp President Donald Trump is making that swamp even more putrid and rancid with the stench of lies, privilege and rank hypocrisy that wafts from it daily.

READ MORE: Trump: 'If Iran Wants to Fight, That Will Be the Official End of Iran' — Really?

The pathetic mainstream media in the UK has devoted more audio commentary and newspaper space to attacking Jeremy Corbyn for refusing to attend the State Dinner in Donald Trump's honour last night and agreeing to address the massive protest today in central London against Trump's visit than attacking the bigotry, racism, misogyny and warmongering.

Donald Trump has earned the scorn, disdain and condemnation of every human being with a basic combination of decency in their hearts and brain cells in their head.

© Sputnik / Vladimir Astapkovich
'Strongly Pro-Life' Trump Talks About Abortion, Says He Would Make Exceptions in This Three Cases
Trump is for Trump and he will do anything and say anything to maintain and promote himself. It is necessary to attack his shocking ignorance of history, politics and world affairs. Detailed analysis of his pronouncements exposes the fact he has uttered 10,000 untrue statements since being inaugurated America's 45th President. That works out at around 12 lies a day.

One of his recent lies was particularly shameful and shocking but was hardly called out in America and has certainly been ignored by the hired poodles in the UK media who have treated Trump with kid gloves. The argument surrounding abortion is understandably passionate and controversial. Most people would describe themselves as pro-Choice rather than pro-Abortion in recognition of the inalienable right of women to control their own bodies. Legislating against abortion has never and will never stop abortions from taking place. All it does is make abortions more secretive and dangerous. Passions run high on the issue but read what Donald Trump recently said at a rally in Wisconsin and then ask yourself if those comments are worthy of an American President?

"The baby is born; the mother meets with the doctor. They take care of the baby. They wrap the baby beautifully. Then the doctor & mother determine whether or not they will execute the baby." pic.twitter.com/Hg6V6pjgpX

​What sort of individual is willing to so blatantly distort the truth in relation to such an emotive issue for personal gain and acclaim? If he believes that depiction represents abortion he is an ignorant person who should be debarred from holding a driving licence let alone the key to the White House.

© AP Photo / Evan Vucci
Trump's Iran Strategy Prompts Split in US Congress and White House
Trump is the guy who supports and cheer-leads the separation of children from their mothers at border checkpoints.

Trump is the guy who mocks the disabled in public.

Trump is the guy who equates anti-racist campaigners and White Supremacists who deliberately kill and drive into crowds of defenceless and innocent people.

Trump is the guy whipping up hatred by banning Muslims from entering the US and refusing to condemn or even question police officers guilty of shooting and killing unarmed black men.

Trump is the guy who abused women and bought their silence and consistently uses sexist language to undermine any female critics.

© REUTERS / Jonathan Ernst
Trump Won't Ban Riyadh Over Khashoggi Case, Will Capitalize on It – Ret. General
Trump is the guy who has overruled the elected House of Representatives decision to ban arms sales to Saudi Arabia in protest at their illegal use of those weapons and litany of human rights abuses. Trump represents the military companies not the innocent victims of war crimes in Yemen.

Trump is the guy imposing deadly economic sanctions on the people of Venezuela in an attempt to overthrow an elected government.

Trump is the guy threatening to attack Iran and spark a catastrophic war with huge consequences for the Middle East and rest of the world.

If you think that guy deserves anything other than outright condemnation and organised opposition then you should seriously assess your moral compass.

Jeremy Corbyn is absolutely right to join the protesters today in opposing this dangerous bigot. Trump may not be a fascist but he certainly displays many of the prejudices and views synonymous with those of White Supremacists.

The media in this country should not be condemning Jeremy Corbyn for addressing the anti-Trump rally today, they should be asking the other so-called believers in democracy and human rights why they are not joining him?