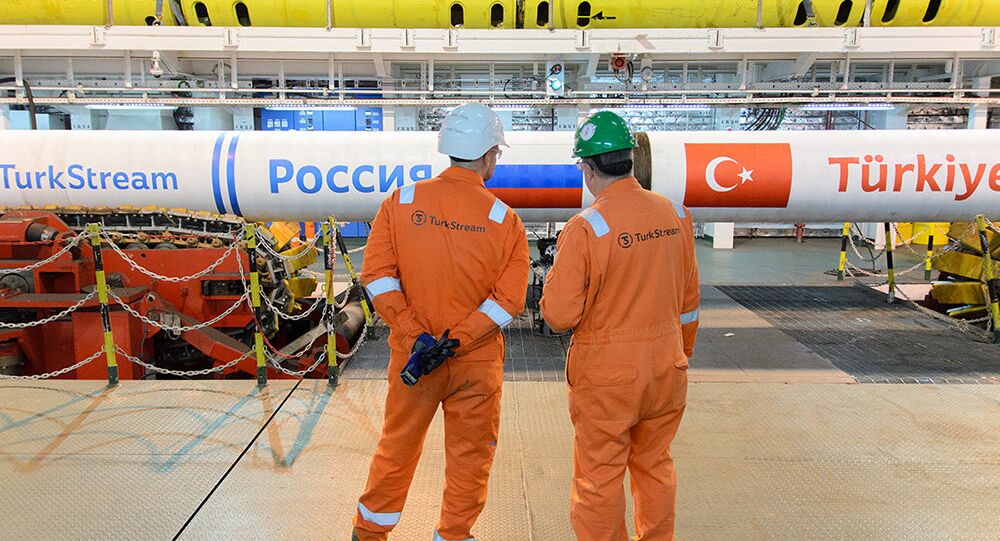 A number of European countries have recently signaled willingness to receive Russian natural gas through the Turkish Stream pipeline. Italy, Bulgaria, Serbia, and Hungary are seeking to boost purchases of Russian hydrocarbons. In light of this trend the future of the expected US LNG boom seems bleak.

Although Brussels had managed to force Moscow to cancel its South Stream pipeline in 2014 Russian gas will find its way to southern Europe all the same: Russian President Putin has made it clear that the Kremlin was considering connecting the Italian Peninsula to the Turkish Stream.

"We are exploring all possibilities: and connecting Italy along various routes to the Turkish Stream, it can be through Bulgaria, it can be further through Serbia, Hungary, it can be through Greece, it's also cooperation due to the increasing volume of future supplies on 'Nord Stream 2'," the Russian president said during a press conference with Prime Minister of Italy Giuseppe Conte.

© Sputnik / Iliya Pitalev
Gazprom to Start Building Land Section of TurkStream's 2nd Line in 2019 - Deputy Chairman
The South Stream — a Russian-Italian-French-German project — envisaged delivering Russian pipeline gas under the Black Sea to Bulgaria, and then transporting hydrocarbons through the Balkan Peninsula to Italy and Austria. The plan was outlined by Russia's Gazprom and Italy's Eni in 2007, while in subsequent years they were joined by French company EDF (2010), and Germany's Wintershall Holding (2011).

However, in 2014 Brussels exerted pressure on Sofia over the Ukrainian crisis, forcing the international players to abandon the lucrative endeavor.

As Russian Senator Alexey Pushkov put it, "Bulgaria ditching the South Stream was a gross error, Turkey immediately seized its chance [with Turkish Stream], and Germany is building Nord Stream 2. A good lesson for Sofia."

Still, in November 2015 Ankara jumped on the bandwagon of the Russian gas pipeline project paving the way for the Turkish Stream initiative.

© Photo : Nord Stream 2
Turkstream, Nord Stream 2 Vital for EU to Meet Growing Gas Demand - Gazprom
The pipeline project consists of two lines with a total capacity of 31.5 billion cubic meters per annum. The first one, with a capacity of 15.75 billion cubic meters, will deliver Russian hydrocarbons directly to Turkey. The second one is intended to provide European states with Russian natural gas.

In May 2018 Sofia signaled its keen interest in Turkish Stream. In addition, Bulgarian President Rumen Radev proposed building a direct pipeline from Russia to Bulgaria.

"I hope that our governments will also review the possibility of direct supply of gas from Russia through the Black Sea," Radev said during a visit to Moscow in May 2018.

Earlier, in March 2018, Russia and Serbia revived a plan to build a gas pipeline in the Balkan country, following Serbian President Aleksandar Vucic's trip to Moscow in December 2017. It was announced that the Serbian pipeline would be connected to Bulgaria and Hungary to deliver Russian hydrocarbons from the Turkish Stream pipeline.

In September 2018, Hungarian Prime Minister Viktor Orban came to Russia to discuss the parameters for Russian gas supplies for 2020 and the possibility of extending the Turkish Stream pipeline to Hungary.

"It is no secret that when the pipeline will be built in the direction of Hungary from the south, we would like it to pass through Hungary. That will be a great opportunity for Hungary and I asked Mr. President [Putin] to seriously consider such an option," Orban stressed commenting on his summit with Putin.

Thus, after Conte's visit to Moscow, the list of potential participants of the Russian gas project has taken shape. It appears that they are determined not to allow Brussels to throw a wrench into their works.

The increase in supplies of Russian hydrocarbons does not fit into Washington's plans to make Europe a "massive buyer" of American liquefied natural gas (LNG).

In July 2018 US President Donald Trump called upon the EU leadership to bolster the number of LNG terminals in Europe to receive US super-chilled fuel. However, the problem is that even existing terminals are loaded less than a quarter.

However, Europeans consider US LNG non-competitive: "LNG from the United States has a higher price because of the large percentage of gas obtained through non-conventional sources of production (fracking). It is currently not competitive in Germany," Germany Federal Foreign Ministry's report stated in early October 2018.

While Washington is seeking to dramatically increase LNG production it remains unclear whether the endeavor prove profitable, especially in light of China's decision to halt purchases of American super-chilled fuel.  By the end of 2019, Washington intended to triple its LNG production from the current 3.6 billion cubic feet per day to 9.6 billion (about 99 billion cubic meters annually). Now, the prospects of the US energy export boom look shaky.