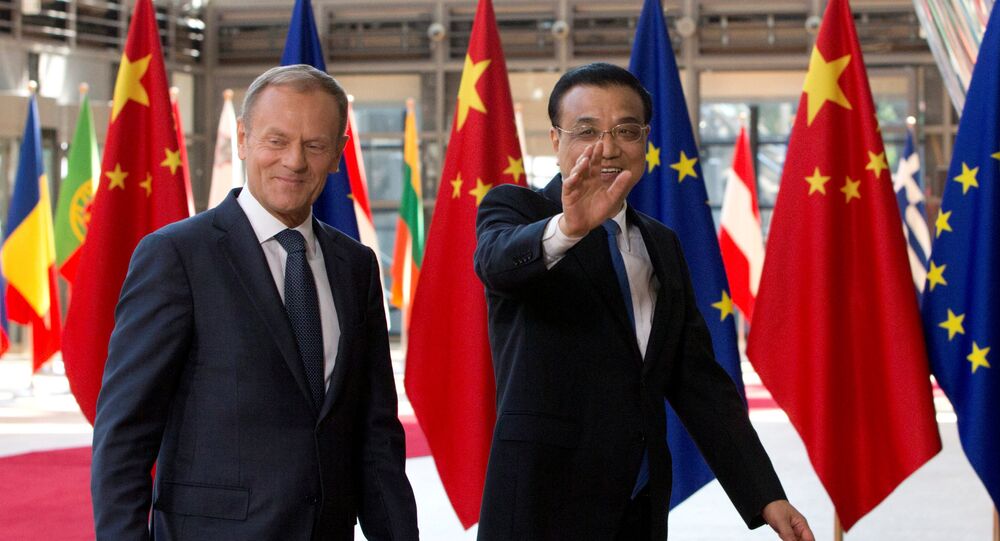 While European governments haven’t taken sides at the trade row between Beijing and Washington, China reportedly “awarded” European businessmen with contracts, pushing US firms aside, as a new report by a business group suggests. According to its analysis, European entrepreneurs will suffer if the conflict escalates.

The European Union Chamber of Commerce in China has revealed that European-based companies are shifting their export routes and supply chains to prevent their US-bound export of goods from China in order to avoid extra taxation and potential losses.

In a report on Sino-European trade, dedicated to an 18-month-old speech given by President Xi Jinping at Davos, which endorsed globalization, the business Chamber has called on Beijing to meet foreign investors’ interests and create a friendlier field for them, prompting reform and more openness according to The South China Morning Post.

READ MORE: Trump Slams EU as 'Possibly as Bad as China' on Trade Amid Tariffs Row

Speaking about the impact of US tariffs on $34 billion worth of Chinese goods, including medical equipment and electronics, and China’s retaliatory measures, the group’s head, Mats Harborn, has revealed that a European company has set up an assembling unit in the US to avoid exporting from China. At the same time, some European firms have been “awarded” deals in the Asian country instead of their rivals from the US.

“But that is not the way we’d like to get contracts. We want open and fair competition,” Harborn said.

The association also reprimanded Chinese authorities for their economic regulations, which lead to unequal conditions for licensing and state subsidies on some industries, as well as a dependence on the will of the government, resulting in “frequent and unforeseeable” changes of policy.

“China is already beginning to experience the consequences of its current approach, with increasingly strong pushback from its two largest trading partners [the US and the EU],” the report stated.

The business group also scolded the US president for his approach to China, slamming tariffs as a "dangerous and very blunt instrument."

"We share the concerns expressed by the American side. But there are better and less risky ways to deal with these problems," he stated.

As quoted by The South China Morning Post, Harborn warned that many members of the Chamber would “be caught in the crossfire” if tensions continued to grow, and called on the EU and China to cooperate to resolve the conflict.

The report emerged amid two separate rows between China and the US, as well as between the EU and Washington over tariffs. In particular, China has introduced a 25 percent tariff on $34 billion worth of US goods in response to Washington subjecting $34 billion of Chinese imports to additional taxation.