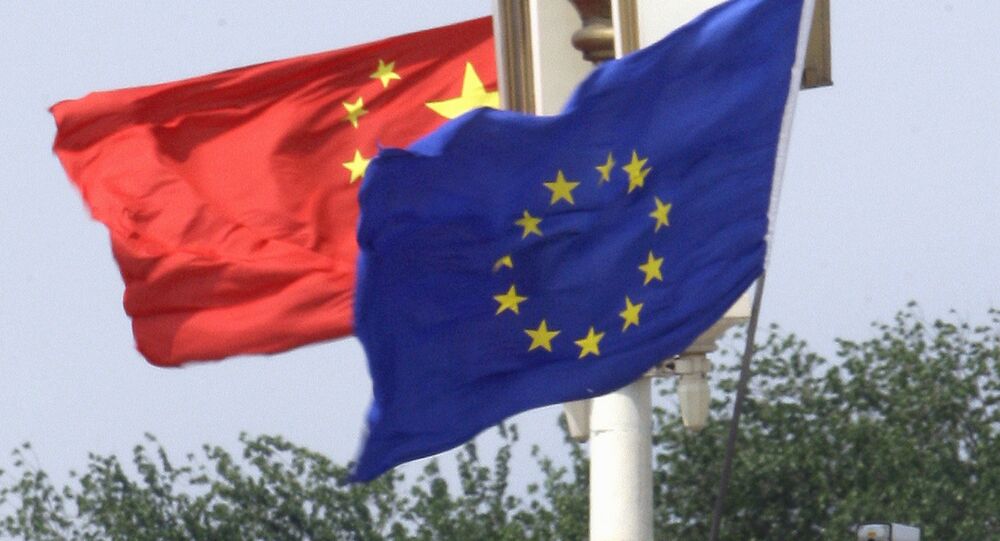 The US’s decision to restrict the import of investment capital from China has pushed the latter into the arms of the EU, suggesting a bilateral investment deal could be in the making, as both Brussels and Beijing are disgruntled by the new US trade policies.

Kristian Rouz — The European Union (EU) and mainland China are advancing bilateral talks on a possible investment agreement. Beijing is seeking to diversify its sources of technological development, whilst the EU is interested in China's immense consumer market.

This comes as the US Treasury is weighing possible new restrictions on Chinese investment in American companies, citing concerns over the transfer of technology and national security.

The sides agreed to counter protectionism and defend the status quo in international trade, which they see as free and unrestricted global trade. Besides, China's Vice Premier Liu He said Beijing and Brussels have agreed to strike a bilateral investment deal.

"China and Europe are facing the common challenge of US actions on trade and multilateral institutions, which gives [Beijing and Brussels] more room to cooperate," Cui Hongjian of the China Institute of International Studies said.

© AP Photo / Jesco Denzel
Art of the Trade Deal: Key Facts on Trump's Spats With Neighbors, Europe & China
This comes after several German lawmakers voiced concerns over China's acquisitions of controlling stakes in the largest German carmakers and other manufacturing companies. For example, this past February Chinese billionaire Li Shufu, the man behind China's Geely automotive group, acquired a $9 billion stake in Daimler, the maker of Mercedes-Benz cars.

US officials have said that China's outbound international investment has been aimed at forced technology transfer, according to the publicly available results of the Section 301 investigation. The Treasury Department subsequently announced a plan to restrict Chinese investment due to national security concerns.

"It is now clear that Trump's policy is not about the trade deficit," Raymond Yeung of the Hong Kong branch of the Australia & New Zealand Banking Group said. "Security risks can be applied to every aspect in a bilateral relationship, investment restrictions in particular."

© REUTERS / Aly Song/File Photo
Tariffs? Meh: China Has Other Ways to Answer Trump's Trade War
The areas affected under the proposed crackdown would include several sectors of US manufacturing, such as new-energy vehicles, aerospace, and robotics. Additionally, US officials have voiced concern over China's interest in 5G telecom technology, as well as artificial intelligence (AI).

Nonetheless, European officials have said an investment deal with China is a possibility and stress that they seek concrete steps of behalf of China to remove regulatory restrictions on EU exports to China. European officials have also said they are seeking easier access to the Chinese domestic market, adding that China should also resolve its overproduction of steel.

Some experts say a possible China-EU investment deal could combine the features of two broader frameworks of international cooperation, proposed by each side previously. China has been advancing its "Belt and Road" initiative into the countries of Central Asia, whilst the EU has championed its "connectivity" roadmap, seeking to export European values and institutions.

"The EU will have to explain to China what it means by ‘connectivity,'" Jan Weidenfeld of the Mercator Institute for China Studies said. "China's belt and road is more narrow and emphasises an ‘economic development first' approach, while the EU's connectivity plan will stress principles like human and individual rights, like education."

The "connectivity" initiative is set to be reviewed by the European Commission this autumn. But China has sought to leave the rhetoric of human rights outside the framework of its business dealings in the international arena, suggesting the bilateral EU-China trade deal could be concluded outside the "connectivity" paradigm.

During the China-EU meeting on Monday, the sides also said the ongoing global trade war could pose the risk of a global recession. Meanwhile, the US Treasury is expected to unveil its new restrictions on China investment as soon as this week.

China Better Economic Choice Than US for EU