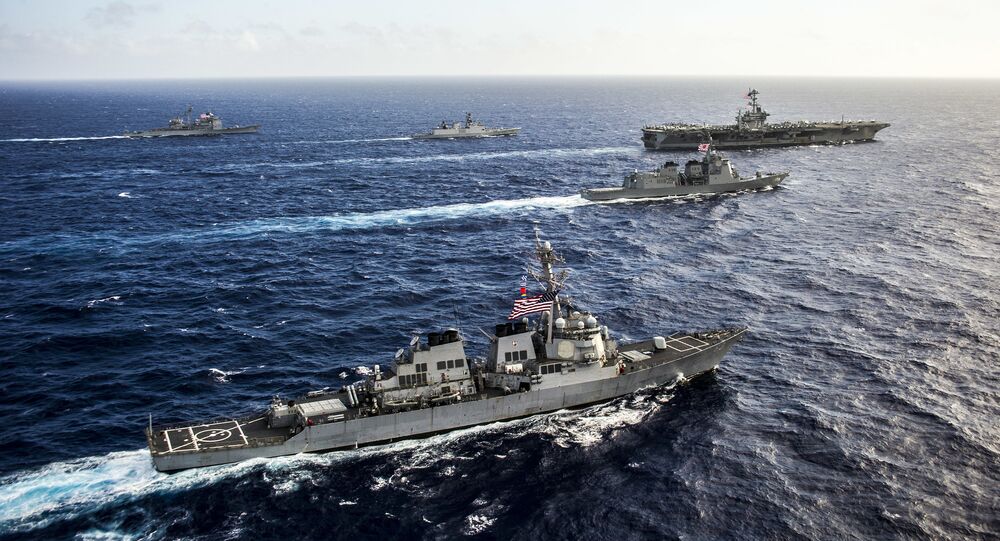 In a sharp rebuff to China, which may complicate the ongoing border stand-off, India's Ministry of Defence announced on Monday that Australia would participate in the Malabar 2020 multilateral naval exercise. The announcement evinced massive interest among security observers, as after 13 years, the Malabar drills will feature the full Quad.

India has finally agreed to accept Australia’s willingness to join other Quad members - India, Japan, US - in the Malabar Exercise, in which Canberra has not participated since 2008, prioritising instead its relationship with China. Beijing termed a military dimension of the Quad as an “Anti-China coalition” at the beginning and on Tuesday it once again reiterated that military cooperation should be conducive to regional peace and stability.

Looking forward to to exercise #Malabar in November. #NavyPartnerships https://t.co/i4zzEHh05D

Nevertheless, security watchers exulted soon after the announcement and said that this is the beginning of a military dimension of the Quad and that it may finally shape into a NATO-like structure in Asia.

Venugopal Vengalil, a retired commodore of the Indian Navy, has spoken to Sputnik in an interview about the decision and how it will reshape the security structure of Asia.

Sputnik: Is an Asian NATO in the offing to counter a mighty China?

Venugopal Vengalil: An Asian NATO is a figment of the imagination of the media and a few analysts. The Quad is in its nascent form, although the concept was floated by Japanese Prime Minister Shinzo Abe in 2007. It remained dormant till 2017, since the member states had good economic relations with China and preferred not to upset the cart. The Quad was again revived in 2017 post ASEAN summit following Chinese hegemonic intent in the South China Sea and East China Sea. Initially the dialogue was at the secretaries-level and last year it was upgraded to ministerial level.

© AFP 2021 / NICOLAS DATICHE
As Trump Adopts a Harder China Line Ahead of US Vote, India Must Lend Full Weight to QUAD - Analysts
Each of the members have their own strategic concerns with China. US (trade war), Australia (economic), Japan (Senkaku Islands), and India (land border disputes). Although the Quad has met regularly since 2017, no clear mandate or charter has emerged in any form or by a joint statement. A consensus can only emerge based on convergence of strategic objectives by members which gives shape to any alliance or partnership.

Hence the stage has not been reached for the grouping to graduate into a military alliance as of now. It is unlikely to move in that direction in future as well. In my view, members are likely to prefer the approach of countering China economically by engaging with countries in the Indo-Asia Pacific region with the aim of drawing them away from Chinese influence.

Sputnik: Has India shrugged off inhibitions to openly take on China in the region?

Venugopal Vengalil: It is important to note that war or aggression is no longer an instrument of a state’s policy. India is engaging with China bilaterally through military-level talks and at diplomatic levels to resolve the current disputes. As of now we do not wish to upset the progress of talks with China. However, we continue to interact with like-minded countries in the Indo-Asia Pacific region and members of the Quad working towards ensuring peace, cooperation and prosperity.

© AP Photo / GAUTAM SINGH
A U.S. Navy officer, left, looks on as an Indian Navy Sea King helicopter prepares to take-off from the USS Boxer, an amphibious assault ship, during the India-US joint naval exercise, 'Malabar-06', in the Arabian Sea, India, Sunday, Oct. 29, 2006. Eleven ships and two submarines from the two nations are participating in these joint exercises which began on Oct. 25 and will end on Nov. 5, focusing on a variety of functional skill areas, including force protection drills, formation steaming, amphibious landing and anti-submarine warfare training.

Sputnik: How will this complicate India’s whole gamut of border issues with China?

Venugopal Vengalil: We are very cautious in our approach with the aim of resolving border issues through dialogue. Also note that the border disputes with China are bilateral in nature and it has no links with our engagement with the Quad members. It may be noted that China has expressed concern over the last meeting of the Quad at Tokyo, which in my view is their tactic of playing the victim card.

Sputnik: Will this announcement further polarise the Asian region and may it trigger an arms race?

Venugopal Vengalil: The invitation to Australia to participate in Malabar has no direct links to security in the region. Malabar is a series of exercises which started in 1992 between the Indian and US Navies with the aim of improving interoperability of the navies, which is important during HADR and other peacetime operations. Japan joined in subsequently as a permanent member in 2015. The multilateral naval exercises are not aimed against any particular country.

© AFP 2021 / Japan Coast Guard
This handout picture taken by the Japan Coast Guard on January 19, 2013 shows a Chinese Marine Surveillance ship cruising inside waters around the disputed islands known as the Senkaku islands in Japan and the Diaoyu islands in China, in the East China Sea.

It is a wrong perception in the media linking up these exercises to any military dimensions. Let me also reiterate that the Malabar exercises and the perceived Quad alliance are two different subjects and are not interlinked as of now. These exercises will not lead to any arms race in the region. The security paradigm in the region would crystallise post US elections and the new government’s foreign policy for the Indo-Asia pacific region. We will be witnessing a period of changes in the region’s geopolitical landscape in the days ahead.