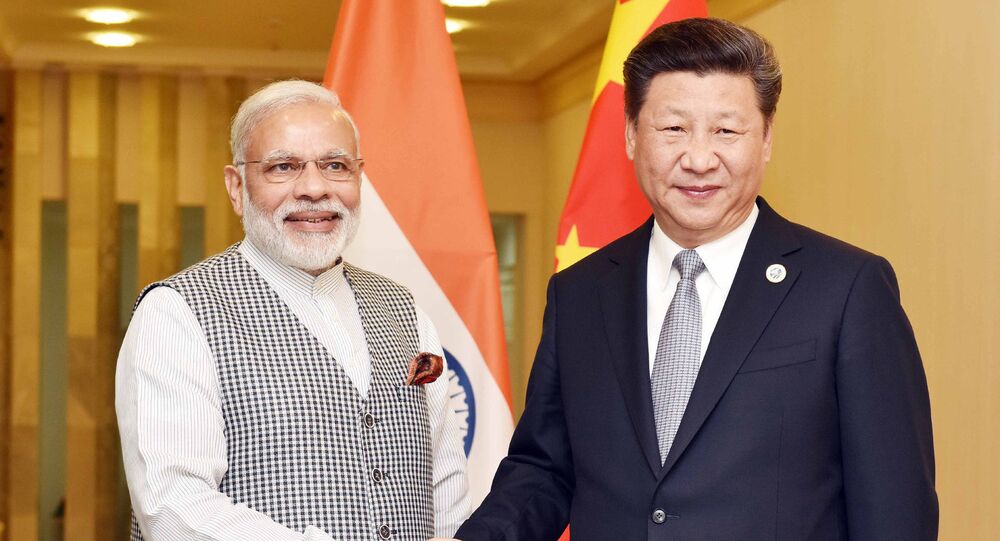 The US foreign policy establishment is deluding itself if it plans to use the India-China border conflict to pit New Delhi against Beijing while the US State Department is ramping up tensions with the People's Republic, says Suvam Pal, a Beijing-based Indian journalist and author.

Chinese and Indian troops have disengaged in most localities in the aftermath of a series of talks between New Delhi and Beijing under the Working Mechanism for Consultation and Coordination on China-India Border Affairs, according to Foreign Ministry spokesperson Wang Wenbin.

"Currently the two sides are actively preparing for the fifth round of commander-level talks to resolve outstanding issues on the ground", Wang told journalists on Tuesday. "We hope the Indian side will work towards the same goal with China, implement the two sides' consensus and jointly uphold peace and tranquillity along the border".

Prior to this, New Delhi announced on 24 July that India and China had agreed on “early and complete disengagement” along the Line of Actual Control in Ladakh following the deadly skirmishes in mid-June which claimed the lives of at least 20 Indian soldiers.

"It's very unfortunate what happened on 15 June 2020. I'm not going to speculate about whose fault that was, none of us actually know", says Suvam Pal, a Beijing-based Indian media professional and author, admitting that the clash has hurt bilateral ties.

He bemoaned the fact that the deadly incident, the first in almost 40 years, coincided with the 70th anniversary of the establishment of diplomatic relations between India and China.

The Chinese-Indian border tensions were followed by New Delhi's decision to ban dozens of Chinese mobile applications, including TikTok, Weibo, and WeChat, on 29 June under Section 69A of the Information Technology Act. On 27 July, India barred a further 47 Chinese apps which allowed access to the previously banned software products.

According to the Indian government, the applications are engaged in activities "prejudicial to sovereignty and integrity of India, defence of India, security of state and public order". For its part, China's Foreign Ministry signalled that Beijing is "strongly concerned" by the ban.

Besides this, the Indian authorities have barred state-run carriers from acquiring equipment from the Chinese telecom giants Huawei and ZTE. Citing sources familiar with the matter, The Economic Times reported on Monday that Huawei had "slashed its India revenue target for 2020 by up to 50% and is laying off 60-70% of staff, excluding those in research and development and the Global Service Centre".

Suvam Pal deems that the ban imposed on China's apps in India is largely symbolic, as many Indians do not even use them. He recollects that Beijing, for its part, has barred most US apps on the mainland.

The crux of the matter is that the aforementioned restrictions meet the aspirations of Prime Minister Narendra Modi's electorate and Indian nationalist groups, the author suggests.

"I don't buy into the logic of some sections of Indian ruling party nationalists who believe that bashing China can actually make you a powerful global player", the author says. "You cannot isolate China in today's world. China cannot also isolate India because both have a long history of fruitful relations. Indian nationalists need to soften their stance: one cannot boycott China. The countries need to come up with a win-win solution. A zero-sum game won't help anybody".

Whatever targeted restrictions the two neighbouring countries may impose on each other, they are still closely bound by trade relations, politics, and shared history, Pal believes. He notes that regardless of the simmering tensions, neither India nor China has been spotted "poking nose" into each other's domestic affairs, with New Delhi remaining silent on the issues concerning Hong Kong, Taiwan, Tibet, and the South China Sea. Neither India nor China is interested in falling into the "Thucydides trap", when one power is striving to undo and replace the other, he underscores.

"Unnecessary aggressive posture and useless provocative statements from both India and China will play hindrance to the reconciliation process and will always be counter-productive", Pal warns. "Instead of playing to the gallery, strategic experts from both sides should concentrate on finding solutions and ways for reconciliation than adding fuel to the fire through their nationalistic and propagandist postures. True scholarship is the need of the hour".

Meanwhile, the weekly news magazine India Today has raised the question whether New Delhi should beef up its presence in the South China Sea in order to "rein in China in Ladakh".

"While India maintains that the South China Sea is a neutral navigation field beyond the sovereign limits of the littoral countries, it has not taken a strong position against Chinese bullying attempts", writes the magazine's contributor Prabhash K. Dutta, stressing that the US and some of the ASEAN countries want New Delhi to adopt a more assertive posture in the region.

Washington, which declared China's maritime claims in the sea null and void earlier this month, has long been wooing India. Donald Trump's Asia Reassurance Initiative Act of 2018 (ARIA) particularly envisaged the strengthening and broadening of diplomatic, economic, and military ties between the United States and India.

Last Monday, a US Navy carrier strike group led by the USS Nimitz conducted a military drill with Indian warships off the coast of the Andaman and Nicobar Islands amid the Sino-Indian border row.

It is good to have friends. From #Nimitz in the Indian Ocean to #ExerciseSeaBreeze in the Black Sea, the @USNavy exercises with our professional counterparts in navies around the world. There is much we can accomplish together https://t.co/SkmGpWxjfL

​New Delhi is also participating in the Quadrilateral Security Dialogue (the Quad), an informal strategic forum between the United States, Japan, Australia, and India that is seen by some observers as an "anti-China" alliance.

However, Suvam Pal stresses that India remains strongly committed to its non-alignment strategy. This does not mean that India cannot maintain strategic partnerships with other countries, the journalist notes, referring to the Quad, joint naval drills with the US, and the recent purchase of Russia's advanced S-400 missile defence systems by New Delhi.

"This is no longer a Cold War", Pal observes. "You can have strategic alliances with the EU, NATO forces, Gulf states or the African Union. China and India have long been allies within BRICS and the Shanghai Cooperation Organisation (SCO). There are different alliances depending on one's choices. It's a multipolar world".

As the US politicians on the left and the right are calling for cracking down on the People's Republic, the American media presumes that India may become a "possible bulwark against a rising China", with the Ladakh border conflict emerging as a window of opportunity for further US-Indian rapprochement.

Washington is largely misreading New Delhi if it deems that India can be used as some sort of a geopolitical tool against the People's Republic, Pal underscores.

"India will never fall into this trap", he says. "The US is looking at their business benefits and they are trying to convince India to take a strong stand against China but Narendra Modi is not that kind of a politician whose strings could be pulled. He knows China very well: he has been visiting China since his days as a Gujarat chief minister. In addition, Modi's Foreign Minister Subrahmanyam Jaishankar was an ambassador to China; he speaks Chinese and knows the People's Republic better than many people".

According to the journalist, Indian foreign policy basics are as "solid as a rock" and cannot be reversed overnight. "So, I don't think that India's China policy will undergo a dramatic shift", he concludes.