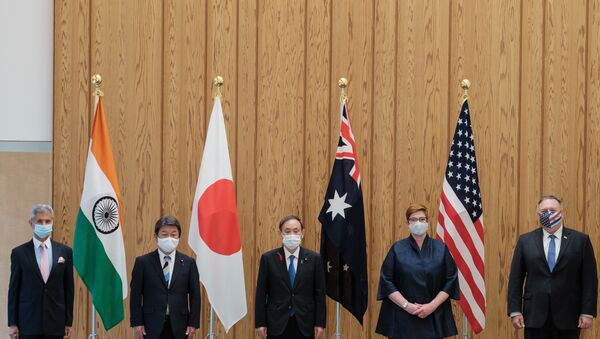 Dhairya Maheshwari
All materials
US Deputy Secretary of State Stephen Biegun has been in India on a two-day visit, arriving just days after a QUAD ministerial meeting was held in Tokyo. In his address at the Indo-US Forum on Monday, Biegun claimed India and the US have been "cautious" when it comes to China.

US President Donald Trump is adopting a "harder line" towards China to boost his domestic approval ratings ahead of the 3 November presidential vote, US foreign policy experts have told Sputnik.

According to Professor Kurk Dorsey, an American foreign policy expert at the University of New Hampshire, "they generally are suspicious of China, but more because of a concern about economic competition from China than because of any Chinese expansion against India or in the South China Sea".

Dorsey, however, cautions that many US voters don't see China as a "central election issue" in the campaign.

"If he is taking a harder line for electoral purposes, it's probably too late to swing any of his opponents to his side, and it probably will not affect the support that he gets from his base", Dorsey opines.

"The voting public is very polarised, and not much will move them off their positions at this point, except something like a war with Iran or some breakthrough with the pandemic", warns Dorsey, adding that most American voters have already made up their minds about which candidate to support.

Pompeo 'Maliciously' Creating Conflict, US Must End 'Cold War Mentality', China Says Amid Quad Talks
Professor Sumit Ganguly, a political science professor at Indiana University, reckons that most American voters are focused on the effects of COVID-19 because "it has wreaked havoc on their lives".

"I doubt that many of them actively connect it to China despite the president's attempt to link the two", says Ganguly.

According to the most recent ABC News/Washington Post Poll, Biden held a 12-percentage-point advantage over Trump.

The looming US election has coincided with an increase in high-level engagements between officials from the US and China's land and maritime neighbours in Asia, including India, which has been embroiled in a five-month military standoff with China at the disputed eastern border of Ladakh.

Growing anger against China but 'caution' in dealing with the US

Former Indian officials have backed the idea of "lending full weight" to the QUAD, in the face of "unbridled threats" being exercised by Beijing in the wake of the COVID pandemic.

"For far too long have we pandered to China's sentiment regarding our strategic partnerships. Now with unbridled threats being made by Beijing we must exercise our strategic autonomy by lending full weight to the QUAD", says Lieutenant General Syed Ata Hasnain, a former four-star general with the Indian Army.

"This autonomy also extends to bilateral relations with nations such as the US with whom our strategic interests converge", adds Hasnain, a regular commentator on strategic affairs.

Yogendra Kumar, former Indian envoy to the Philippines, explains that China's "aggressive" international outlook in the middle of a pandemic is creating "geopolitical turbulence".

"Even as they (China's neighbours) pursue their national interests, a large number of countries feels that the US stance will help mitigate that, as the world community strives for a better post-COVID world", says the ex-envoy.

Professor Harsh V Pant, the Director of the Strategic Studies Programme at the New Delhi-based think tank Observer Research Foundation, echoes these concerns vis-à-vis China. "We just can't sit idle when China is kneeling on our neck at the Line of Actual Control (LAC)", he says.

He, however, warns that India will have to fight its own battles and too much "reliance" on any power will not suit Indian interests.

"While the US is engaged in a global competition with China, the disputes of India and other Asian countries are more regional in nature", says Pant.

The Indian expert highlights that even as the informal India-US alliance has grown in recent years, he doesn't see New Delhi and Washington signing a formal alliance agreement anytime soon.