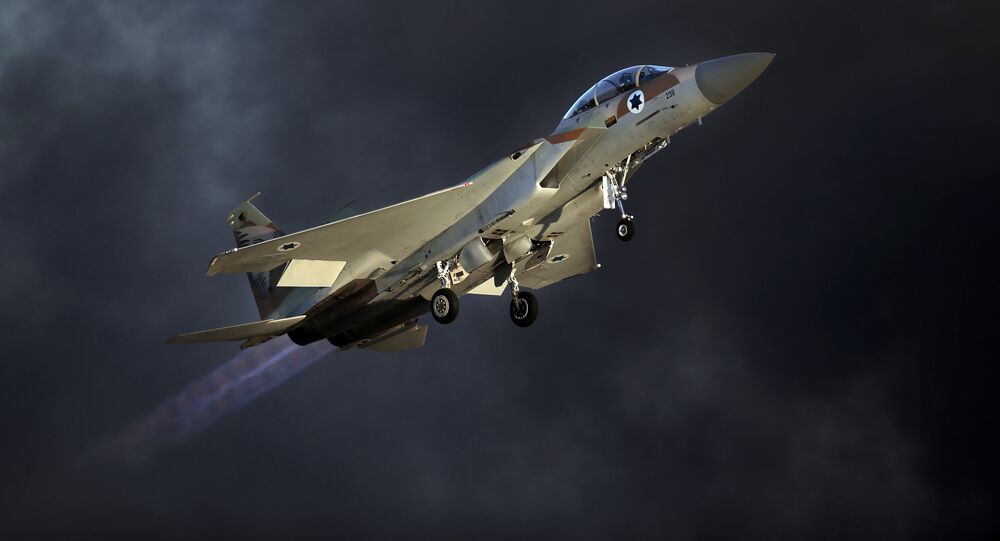 Iran may in some form retaliate to Israel's April 9 attack on the Syrian T-4 airfield, former Iranian military correspondent Hassan Shemshadi opined in an interview with Sputnik. The journalist noted that it is still unclear whether Iranian military advisers deployed at the airbase were Israel's primary target.

Any attack that poses a threat to the security of Iran should receive a worthy rebuff, Hassan Shemshadi, a former Iranian radio and television military correspondent in Syria and Iraq with close links to the Islamic Revolutionary Guards Corps (IRGC), told Sputnik Persian, commenting on the April 9 airstrike on the Syrian T-4 airbase by the Israeli Air Force, which resulted in the death of seven Iranian servicemen.

"Israel decided to take advantage of the current situation," Shemshadi said. "On the one hand, Syrian government forces are gaining victory over terrorists in Eastern Ghouta, on the other hand, the scandal over the [alleged] chemical attack and the possible military operation [in Syria] of the US and its allies (the UK and France) is simmering in the UN."

The journalist pointed out that "Israel invaded Syria's airspace." He elaborated that this time, Israel attacked Syria through the territory of a "third party" — Lebanon.

"The Israelis pursued several goals while attacking the T-4 airbase," Shemshadi opined. "One of them was to wreak revenge on the Syrian [Arab] Army for downing an F-16 fighter in February 2018. This was the first time that the Syrian air defense system has managed to cause serious damage to Israeli fighter jets."

The Israelis want to "persuade the public that the [supposed] chemical attack on the Syrian town of Douma was launched from this airfield which is in fact an outright lie," the Iranian journalist emphasized. "This airbase is used as a staging airfield and which also hosts unmanned aerial vehicles with identification marks."

The former military correspondent highlighted that Iran also suffered losses during the Israeli attack: "Our military advisers, who were helping the Syrian government army and the people of Syria, were killed."

According to Shemshadi, right now it is debatable whether Tel Aviv knew that Iranian military servicemen were deployed at the airfield and whether they were the primary target. However, he believes that this version cannot be excluded.

"Several years ago, in [Syria's] Quneitra region, the Israelis hit a convoy with Iranian IRGC military servicemen," he recalled. "However, the Israelis feared to admit their involvement. They were afraid of the potential reaction from Hezbollah fighters and the IRGC. But such attacks, including those on the positions of the Syrian army by Israel, occurred every time when terrorists suffered a repulse and were weakened."

The journalist stressed that "naturally, since Israel is a key ally of the United States, the attack on the T-4 was not just its idea."

Yet another key element of the Israeli attack on the T-4 airfield is that the Lebanese air defense system remained silent and allowed foreign fighters to cross its airspace, Shemshadi noted, adding that regardless of its influence, Hezbollah doesn't control all the strategic and military matters in the country.

© Sputnik / Iliya Pitalev
Trump 'Delegated' Israelis to Attack Syrian T-4 Airbase – Syrian General
However, the journalist warned against jumping to the conclusion that Beirut was in cahoots with Tel Aviv.

"The bolstering of air defenses in Lebanon is one of the acute problems," he underscored. "Yes, this is a necessary step, which is welcomed by many countries. But the authorities of this country at some point turned out to be the Saudis' political hostages. They are not able to make a decision that would allow Iran to help equip Lebanon with good air defense systems."

He explained that Israel chose to use Lebanese airspace due to the fact that the Syrian anti-aircraft systems remain in a state of combat readiness.

The journalist emphasized that undoubtedly the incursion of Israeli warplanes in Lebanese airspace amount to a violation of the country's sovereignty and territorial integrity. However, although the issue is currently being discussed in the UN Security Council, neither the US, nor the UK or France will vote against Tel Aviv as they "always turn a blind eye to its criminal actions."

© AP Photo / Syrian government TV
Iran Vows to Respond to 'Israeli Crime' Referring to Airbase Targeting - Reports
Shemshadi opined that Iran will not let Israel "off the hook" following the recent attack. Still, it doesn't mean that Tehran would authorize a tit-for-tat strike on the country, he noted, adding that Tehran may show restraint. It is unclear in what form Iran will retaliate, according to the journalist.

He drew attention to the fact that the IRGC has yet to issue a statement about the Israeli attack. "Perhaps in a situation when the enemy wants to force you to go to war and present you as a military aggressor, a military option is not the best solution," Shemshadi suggested.

"It is not yet known whether an attack or any other steps will be taken [by Tehran] in the next few days or a little later," he said. "For its part, Israel should keep an eye out… after the attack which resulted in the death of our valuable military men."

In the early hours of April 9, two F-15 Air Force warplanes carried out a missile strike on the T-4 air base in Syria, while being in the Lebanese airspace. According to the Russian Defense Ministry, Syrian air defense units had managed to destroy five out of eight missiles fired by the Israeli fighter jets. Three missiles reached the western part of the airfield, resulting in the death of 14 people, including 7 Iranian soldiers.

The Iranian Foreign Ministry has condemned the Israeli attack, calling it an "aggression and violation of the sovereignty and territorial integrity of Syria, which contradicts all international laws and norms."

According to the Russian Defense Ministry, the Russian military servicemen stationed at the base were not affected by the attack.

The views and opinions expressed by Hassan Shemshadi are those of the speaker and do not necessarily reflect those of Sputnik.