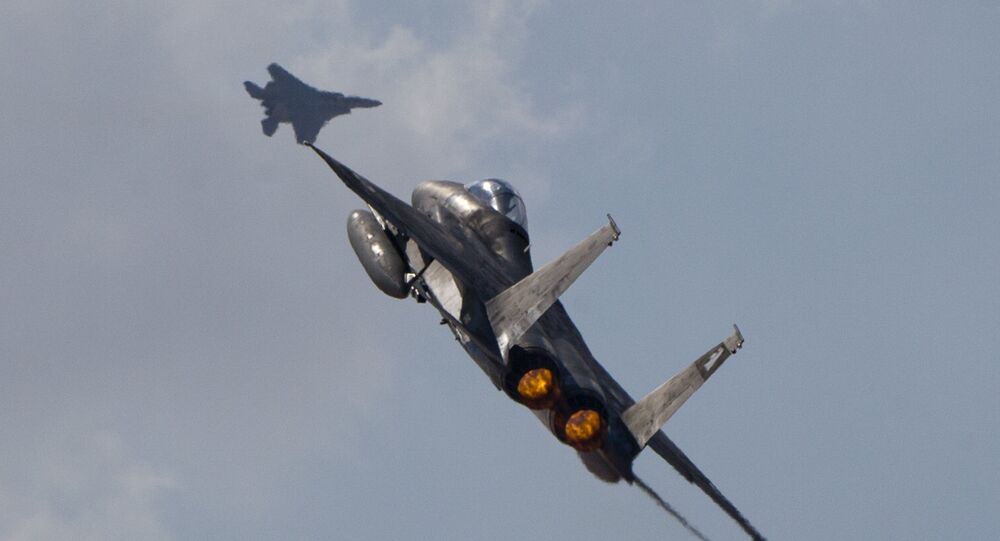 The Israeli airstrike on the Syrian T-4 airbase could have been prompted by Tel Aviv's desire to trigger a confrontation with Iran, Turkish military analysts opined, speaking to Sputnik. They threw into doubt the possibility of a chemical attack in Douma, dubbing it a staged performance.

Israel's attack on the Syrian Arab Air Force's (SyAAF) Tiyas airbase in Homs province was nothing less than a provocation, Turkish analysts opined, drawing attention to the fact that the airstrike occurred following unconfirmed reports about the alleged chemical attack in the Syrian town of Douma in Eastern Ghouta.

"While Damascus' position and its influence in Syria is growing and Syrian government forces are making considerable progress on the fronts, it is completely unconvincing and illogical to claim that the Syrian authorities conducted a chemical attack," ex-Lieutenant General of the Turkish Armed Forces, Erdogan Karakus, told Sputnik Turkey. "Israel is doing everything possible to destabilize and confuse the situation in the region. These steps are part of yet another provocation on the part of the West."

© Sputnik / Iliya Pitalev
Trump 'Delegated' Israelis to Attack Syrian T-4 Airbase – Syrian General
Karakus drew parallels between the US invasion of Iraq in 2003 under a false pretext and the reported chemical attack in Eastern Ghouta. On April 7, a number of media outlets accused Damascus of using chemical arms in the town of Douma, citing sources among Syrian jihadi militants. The next day the Trump administration dropped the hint that it did not rule out the military option as a response to the supposed incident.

Moscow denied the allegations, referring to the fact that the Russian Defense Ministry had repeatedly warned about upcoming chemical provocations in the region amid the Syrian Arab Army's (SAA) successful advance. The Russian Foreign Ministry highlighted that "that military intervention under far-fetched and fabricated pretexts in Syria… is absolutely unacceptable and might lead to very severe consequences."

The retired lieutenant general pointed out that the West is hiding the real state of affairs while spreading false information as the truth.

"There is a serious struggle for power and influence, which affects the UN," he said. "Turkey, Russia and Iran are on the one side. On the opposite side are the West, the US and Israel."

'Israel Seeking to Provoke War Between US and Iran'

Major General Beyazit Karatas, a retired Turkish Air Force officer who previously served as a military attaché in Washington, recalled that it is not the first time that Israel has attacked the Tiyas (T-4) airbase, where Iranian unmanned aerial vehicles (UAVs) are reportedly located.

"Israel's major task for a long period of time has been to provoke a war between the US and Iran," Karatas opined. "This desire of Israel is supported by Saudi Arabia. But the United States behaves cautiously, taking into account the potential reaction of Russia, Turkey, Iran and China. Therefore, they [the US] do not engage in clashes in the region directly, but provide support to local players, using them for their own purposes."

Why Alleged Douma Attack Appears to Be a Staged Provocation

The retired major general called the claims about the alleged chemical attack in Douma "ridiculous."

"It is presumed that the sarin gas was used that during the [alleged] chemical attack, but in fact it was not used," Karatas said. "If you look at the photos published in Western media, you will clearly see that it was a staged event. If, as it claimed, sarin was used [in Douma], neither the father depicted in the photo could take the child in his hands, nor anyone actually could take these pictures. This is a staged farce."

At the same time, the US, Israel and their Western allies are trying to present chlorine as a chemical weapon, Karatas continued. According to the retired major general, these claims do not hold water: Being a toxic substance, gaseous chlorine is by no means a weapon of mass destruction, he says.

"In order to kill people located in one building, you will need to use at least 50 tons of chlorine. In a word, this is not a substance that can be used as a weapon of mass destruction," he explained.

As for sarin, if this gas was actually used in Eastern Ghouta, no one could be there in ordinary masks, without special protective gear, as they would have died from poisoning, Karatas stressed.

"All of the above shows that the allegations and photographs are nothing more than a staged performance," he pointed out. "As you know, Russia has been previously accused by the West of poisoning [former spy Sergei] Skripal. However, it turned out to be a lie. Today few people in the world believe the West's false statements."

The retired major general underscored that it is quite obvious for "reasonable people" that Syrian President Bashar al-Assad would never use chemical weapons under current conditions.

"In addition, if sarin — a gas with high volatility — was used, the biggest losses would be suffered by the Syrian military [deployed in the region] in the first place," Karatas elaborated.

On April 9, two Israeli Air Force F-15 fighter jets attacked the T-4 airfield from Lebanese airspace, according to the Russian Defense Ministry. The ministry pointed out that five out of eight strikes were repelled by Syrian air defenses. Israel's envoy to Russia was summoned by the Russian Foreign Ministry on April 10 over the incident.

The views and opinions expressed by Erdogan Karakus and Beyazit Karatas are those of the speakers and do not necessarily reflect those of Sputnik.