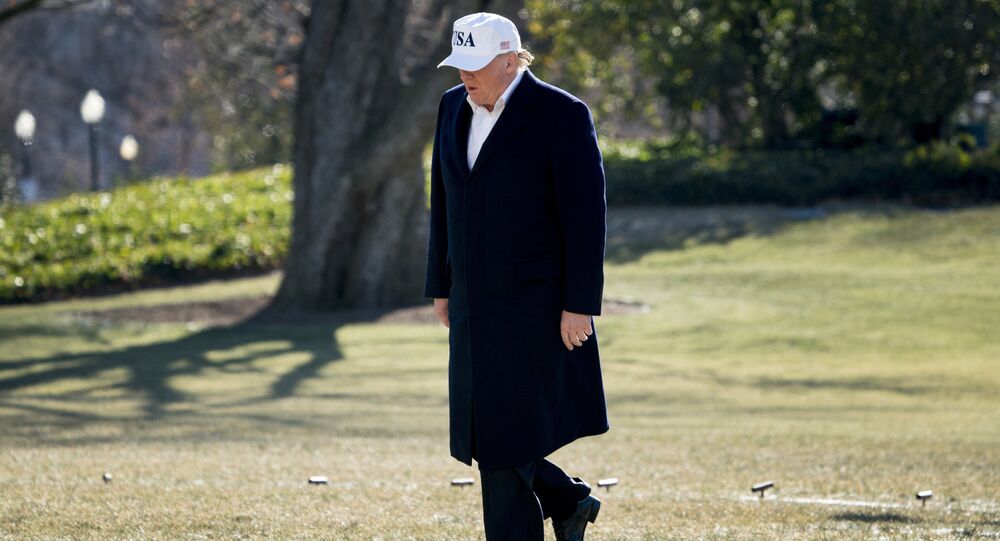 Global US approval ratings have plummeted dramatically since the Barack Obama presidency, a recent poll reveals. Yang Danzhi, the assistant director the Chinese Social Sciences Academy’s Regional Security Center explained to Sputnik the reasons behind the US' waning global influence are.

The image of the US leadership is fading under President Donald Trump, according to research institute Gallup: America's approval has dropped by 10 percentage points or more in 65 countries; in contrast, China's ratings are rising.

"The US failed to put forward any new proposals and ideas on global governance, and took no visible efforts and effective measures to solve global problems of the global economic slowdown and global development slipping.  In addition, the US relations with the UN and other international organizations have become complicated due to [Washington's] intentions to reduce its spending on these institutions," Yang said.

© AFP 2021 / WANG ZHAO
China Winning Over US, Europe in the Global Race for Africa – Analysts
According to the Chinese academic, Trump's "America First" strategy aims to reduce US spending in the sphere of international relations. It is hardly surprising that it triggers concerns among America's allies and raised questions over whether Washington will fulfill its promises. They also began to question the US' ability to carry the burden of responsibility in international affairs, Yang noted.

"Many countries, including Southeast Asia, do not have confidence in how the US will continue to conduct [its foreign policy]," he remarked. "In contrast, China, has demonstrated that it is an active leader that has the courage to take on international responsibility, provide public goods, help less developed countries, and promote openness."

Indeed, one of Trump's first initiatives was to rip the Trans-Pacific Partnership (TPP) up. Then Washington withdrew from the Paris climate agreement. At the same time, the Trump administration's relations with neighboring Canada and Mexico also deteriorated over the US president's vow to exit the North American Free Trade Agreement (NAFTA), let alone Trump's project to build a wall on the US-Mexican border.

© REUTERS / China Daily
Railway Diplomacy: How 'China is Building Routes in All Possible Directions'
While Washington is retreating on various fronts, Beijing has jumped at the opportunity to bolster its ties with Latin America and Southeast Asia. Following the collapse of the TPP, China's Regional Comprehensive Economic Partnership (RCEP) has taken on a new significance.

According to Gallup, out of 134 countries that took part in the recent poll only 30 percent approve the work of the US leadership. For comparison's sake, it is lower than both the approval rating of President Barack Obama's administration (48 percent), and that of George W. Bush (34 percent). Simultaneously, "disapproval of US leadership increased almost as much as approval declined," the report says.

Meanwhile, Germany has replaced the US as the top-rated global power. Europeans also regard Berlin as the flagship of the EU.

"First, Germany is the leader in economic development in Europe, a country with effective governance and the main driving force of European development," Yang explained, "Germany has its own stance on international affairs and it has managed to uphold its position on a number of issues concerning global and regional conflicts."

© CC0
'Cold War Mentality': US Defense Strategy Includes False Judgments on China
According to the Chinese scholar, Berlin pursues "a stable and mature policy towards refugees in cooperation with the US, Britain and France." At the same time cutting edge technologies and high-quality goods from Germany are famous all over the world, he noted.

"Why is Germany gaining popularity in Asia? The crux of the matter is that the country is located far away, which means that it has no territorial claims in the region," the scholar explained. "China, for example, is involved in territorial disputes with some of its neighbors, who are afraid of China's rise. And Germany is a strong non-Asian country. This is an advantage."

So far, only Africa still supports the US leadership with the approval rating of 51 percent. However, China's influence in the region is growing steadily prompting some observers to suggest that Beijing may soon outpace Washington and deprive it of its leadership positions on the continent.

According to Gallup, the current situation has demonstrated a significant "change in the status quo" since the Obama era, when the US's ratings were higher. "The current rankings instead look more like a return to the status quo during the last year of the Bush administration — with Germany on top, followed by China, the US and then Russia," the report reads.

The views and opinions expressed by Yang Danzhi are those of the speaker and do not necessarily reflect those of Sputnik.