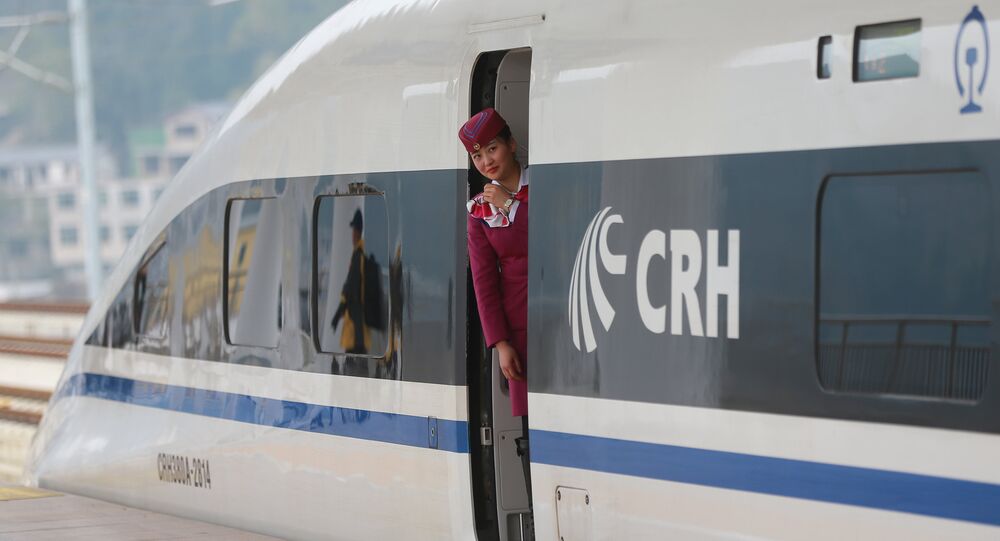 Beijing has stepped up its "railway diplomacy" by boosting its infrastructural projects simultaneously on three continents. Speaking to Sputnik, analysts highlighted China's competitive advantages and shed light on the obstacles the People's Republic is facing while implementing its initiatives.

In Asia, China is carrying out a number of initiatives which include the modernization of the Karachi Circular Railway in Pakistan, the construction of a railway from Shigatse in Tibet to the Nepali capital Kathmandu and the Bangkok — Nong-Khai project.

"China is building trade and transport routes in all possible directions," Mikhail Belyaev, a researcher at the Russian Institute of Stock Market and Management (ISMM), told Sputnik China. "It constructs a railway line from its southern borders to Thailand and other Southeast Asian countries. The US and Japan directly oppose the Chinese 'railway diplomacy.' They absolutely do not need a strong competitor in a region which was traditionally regarded as their sphere of influence."

© AFP 2021 / Prakash MATHEMA
China-Nepal Railway May Trigger Indian Response
At the same time, the geopolitical interests of the US and Japan run counter to those of the countries to which China is offering commercial services within the framework of its "railway diplomacy," Belyaev highlighted.

A high-speed Kuala Lumpur-Singapore railway appears set to become one of the major challenges for China in 2018. According to the Singapore newspaper Straits Times, the tender for the construction will be announced in the near future.

However, Zhang Zhuting, an expert at the analytical center of the Ministry of Transport of the People's Republic of China (PRC), emphasizes that the Chinese have a number of competitive advantages which could enable them to come out on top.

"Firstly, there is the superiority of experience: Chinese companies surpass the Japanese and the [South] Koreans in terms of kilometers of railways built. Secondly, Chinese companies'… services are not limited to the construction of the railway: they carry out earthworks, build infrastructure, use production industries. Third, China has an advantageous geographical position for the development of rail routes in Asian countries."

According to Zhang, the construction of the Pan-Asian railway network will stimulate the region's economic development and create new jobs.

China has become "a gift bestowed from heaven" for Africa, Nikolai Shcherbakov, an analyst at the Center for African Studies of the Institute of General History of the Russian Academy of Sciences (RAS), noted in an interview with Sputnik, adding that nobody except Beijing is willing to invest in the creation of railway infrastructure on the continent.

"It is quite risky to invest in any production in Africa, including the construction of railways," Shcherbakov pointed out. "The Chinese are taking this risk… And it's by no means a sin to take advantage of the opportunities that are finally emerging in Africa today due to China's railway diplomacy."

Observers compare the importance of the East Africa regional railway network created with China's assistance to the role of the Suez Canal for Africa and the Middle East. The project is regarded as a game changer that could help boost political integration in the region. For Kenya, it has become the largest project since the country gained independence in 1964.

For landlocked Uganda, Rwanda and South Sudan the railway network provides an opportunity to reach the Indian Ocean via the port of Mombasa. The construction of the Nairobi-Mombasa line within this country will become the second phase of the construction of the East African rail network. China is ready to invest almost $4 billion in the project. The Export-Import Bank of China has already allocated 90 percent of the sum for the endeavor.

© AFP 2021 / SIMON MAINA
Kenya Railways attendants from China upon arrival from Mombasa in a train launched to operate on the Standard Gauge Railway (SGR) on May 31, 2017 in Nairobi.

Over the course of this year, Beijing has bolstered its railway diplomacy in Latin America and in the Caribbean basin. Two countries — Panama and Grenada — announced its plans to cooperate with China in late 2017.

While Panama is seeking to link its railways with the Costa Rica network, Grenada is considering the construction of a circular railway on the main island.

Earlier, the lack of transparency in the 2014 tender forced Mexico to terminate a $3.75 billion contract with China to build a high-speed railway between Mexico City and Queretaro. However, the Chinese did not give up and shifted their focus on the modernization of railways in Argentina.

After that, the Chinese concentrated on the building of a railway linking the Atlantic coast of Brazil with a port on the Pacific coast of Peru. The road from the port of Santos to the port of Ilo will extend 3,500 km (2174 miles) and will cost $15 — 21 billion according to some estimates.

"Latin American infrastructure is still relatively backward, especially railways,"  Xu Shideng, a researcher at the Center for Latin American Studies of the Academy of Social Sciences of China, told Sputnik. "The reason behind China's failure to develop a number of projects in Latin America is not that these initiatives were not welcome. It's all about political reasons in each and every country, these reasons are not connected with China."

Commenting on the creation of the Brazilian-Peru transport corridor, Gary Rodriguez, the general director of the Institute of Foreign Trade of Bolivia, praised the role of the Brazilian government in the project.

"The fact that Brazil has agreed to join this integration megaproject, ensures the stability of the initiative," Rodriguez explained to Sputnik. "It is important to have large ports that meet the needs of not only a particular country, but also on a broader scale."

The project, which is viewed by Beijing as part of its ambitious One Belt and One Road initiative, will connect the port of Piraeus with the Danube River via Serbia and Budapest. According to some estimates, the project's cost amounts to $1 trillion. However, Brussels is throwing sand in the gears of the initiative, referring to alleged violations of the economic bloc's rules.

According to Xu Feibiao, expert of the Center for World Economy Studies at the China Institute of Contemporary International Relations, the EU leadership is concerned about the fading competitiveness of the European economy, especially in the investment market. At the same time, Chinese investments in the Old Continent have been growing since 2016.

"This [trend] makes some [Western] European countries feel uncomfortable. The European Commission supports these sentiments and tries to use it against China," Xu suggested stressing that Beijing has maintained "excellent" relations with the countries of Central and Eastern Europe (CEE).

While Brussels is examining the Chinese railway project, Chinese Premier Li Keqiang held a meeting with  leaders of Central and Eastern European countries in November 2017 and later announced a$1 billion investment in the development of the region. Additionally, Beijing will provide a $2.3 billion loan to the countries of Central and Eastern Europe.

Observers regard this as a signal to Brussels: China is determined to implement its ambitious economic projects on the continent. Furthermore, in the near future Beijing is planning to modernize ports in the Baltic countries and the southern Balkans and connect them with the New Silk Road linking Asia and Western Europe.