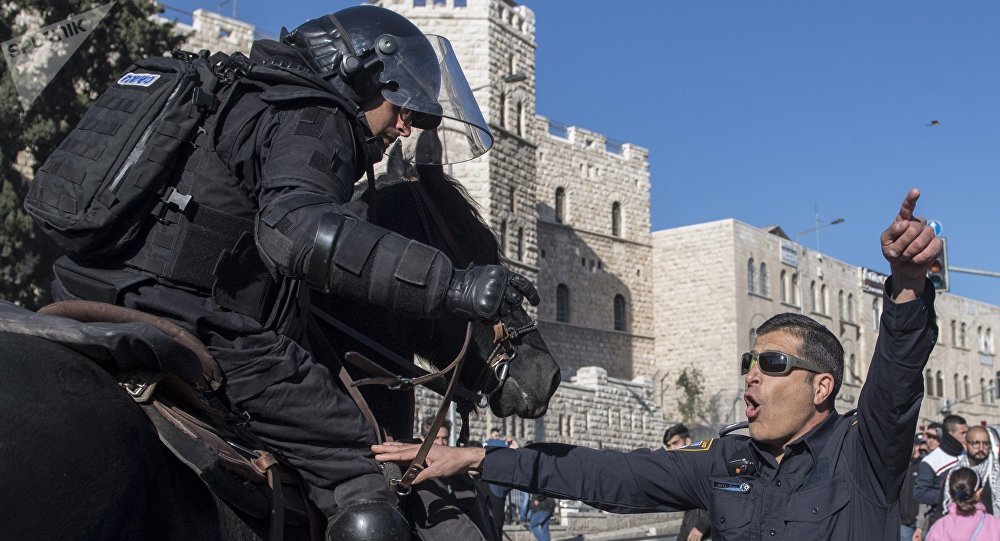 US President Donald Trump's December 6 decision to recognize Jerusalem as the capital of Israel has been condemned by the international community and the Arab League. Speaking to Radio Sputnik Israel Shamir, an international relations analyst said that Trump's move has dealt a lethal blow to the two-state solution of the Israeli-Palestinian crisis.

Sputnik: While the Arab League has said that Washington terminated its neutrality in the region, some experts have argued that the US has never been neutral in this bitter conflict, what is your take on that?

Israel Shamir: Well, it seems to be the result of him [Trump] building up two different things: one is a coalition that will support him [Trump] internally in the United States and there he needs some parts of the Jewish establishment to lean upon. While the liberal Jews are against him he decided to choose for the Jewish Zionists who also have a strong voice within the American establishment and to look for their support. And externally there is, let's say, a new axis being built — let's call this "an axis of goodness" — that is the axis of New York — Tel Aviv — Riyadh. And this second axis of goodness (because they called their enemies an "axis of evil") they seem to build a new idea that they can remake the Middle East. Then we know that the crown prince of Saudi Arabia, [Mohammad bin Salman], is a person of great ambitions, the person of great daring but not very successful, not very lucky. So now it seems that this decision by Trump which was done on his hope that it will be supported by the Saudis, but the Saudis also could not support it publicly. And whether they support it within their hearts or not we still don't know but in a few days on 13th of the month [December] there will be a big Islamic summit in Istanbul and that will a kind of give us a little bit more insight about what will happen.

READ MORE: Erdogan: US Becomes Partner in 'Bloodshed' After Decision on Jerusalem

Sputnik: Now the Arab League has already adopted a resolution but they didn't take any punitive actions. Do you they will wait until December 13?

Israel Shamir: Well, you know, the Arab League is not a very powerful tool, never was. It's an extremely weak organization and its recent steps such as excluding Syria from membership and before that excluding Libya shows that it's a, let's say, a not very independent and not very powerful body at all to speak about. But when we speak about the all-Islamic summit in Istanbul that's already very different and that's already something that is likely to make decisions.

Sputnik: Trump has made the statement just he made it clear that the peace process the Israeli-Palestinian peace process as it is, is just truly a complete sham. What do you think of that?

Israel Shamir: Well, to a great extent it is true, we see that the people of Jerusalem who are very quick to respond when they see that something real happens as they reacted this summer during the Al-Aqsa event. Now they don't respond much. Actually their response is still very mute, very muted. And the reason is exactly because that decision which is not being [translated] into some facts on the ground from this point of view. And yes it is possible to say that the peace negotiations were a sham, and that's why what Trump actually did that he came in and said well, you know, he… made a big, big joke for everything we did the last twenty years, that was basically a joke [laughs]. He always says that he opens hypocrisy of all previous secretaries of state, of all the previous presidents of the United States. Yes you can say that too. And then the question is how people will respond to it, whether the Islamic states will be able to find […] hands, whether they will be able to act in any particular way. There is no doubt that people, as opposed to the governments of the Middle East, feel very strongly about Jerusalem, feel very strongly about the Israeli occupation, so for them that is a real thing.

Sputnik: I think that the media really does not cover the extent to which the situation and the status of Palestinians living in Jerusalem.

Israel Shamir: Yes, indeed, it's impossible to find in the American or Western media at all a reference even to the point that all non-Jewish residents of Jerusalem who lived there since time immemorial, as we say, they have no citizenship rights — they have only residency rights which can be withdrawn at any moment and usually it's being withdrawn if a young man or a young woman is going to study, very often the Israeli government [revokes] their residency permit. Indeed, there should be a much stronger fight against the real apartheid that takes place in the occupied territories and in Jerusalem and I think that is probably the most important thing.

© REUTERS / Mussa Qawasma
Palestinian demonstrators react to tear gas fired by Israeli troops during clashes at a protest against U.S. President Donald Trump's decision to recognize Jerusalem as the capital of Israel, in the West Bank city of Bethlehem December 9, 2017

Sputnik: In 1980 Israel passed what they call the Jerusalem law and that law de facto declared Jerusalem as the capital in its entirety and shortly afterward the UN Security Council passed Resolution 478 declaring the law null and void and the Israeli annexation of East Jerusalem is illegal as it violates several principals under international law.

Sputnik:  Does the US have any interest at all in the creation of a two-state solution?

Israel Shamir: In my personal view the two-state solution is dead or almost dead and they think we should just continue to fight for equal rights in Palestine like it was in South Africa.

The views and opinions expressed by Israel Shamir are those of the analyst and do not necessarily reflect those of Sputnik.

Thousands of Moroccans Join Rally Against US Stunt on Jerusalem (VIDEO)