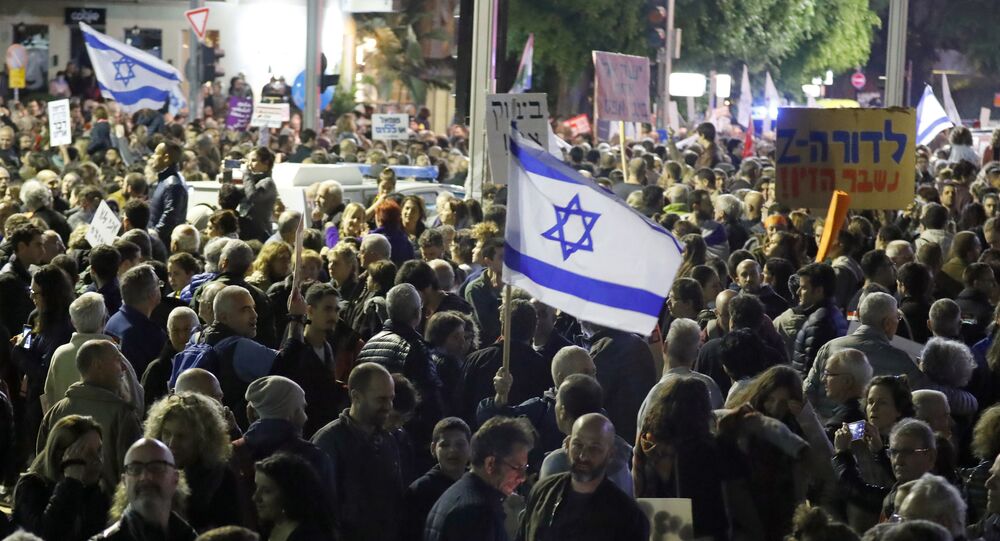 A second "March of Shame" over the course of 7 days has been held in Israel at a time when " the flags of Israel and the US are being torched," as described by the ruling party.

The protest dubbed "March of Shame" was part of a series events that were held in other Israeli cities, all sparked by corruption allegations against Netanyahu, with the previous rally being held last week.

People held banners and shouted slogans against the prime minister, who has been suspected of being involved in bribery, fraud and breach of trust. Some of the protesters also denounced Tel Aviv's policies.

Following the protests, the ruling Likud party issued a statement, claiming that such protests divided the nation at a time, when " the flags of Israel and the US are being torched," speaking about anti-Israeli protests across the Arab world.

The protests come amid the recent decision by US President Donald Trump to recognize Jerusalem as the capital of Israel and signing the document relocating the US embassy from Tel Aviv to Jerusalem. This has sparked a negative reaction from many countries around the world, primarily in the Middle East.

READ MORE: Lebanese Police Use Tear Gas Against Protesters Near US Embassy in Beirut

The decision has already led to "day of rage" clashes in Israel with dozens of injured, and exchange of fire with Gaza, which led to the death of four Palestinians.