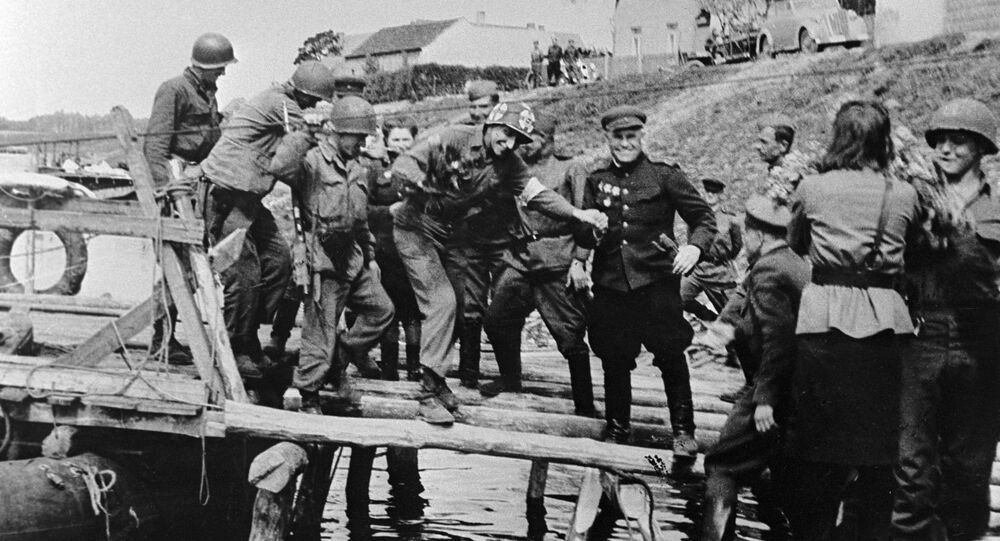 Why US, EU Falsify Memory of Russia's Role in Defeating Nazi Germany

Attempts to rewrite WWII history started at the very beginning of the war, Canadian academic Michael Jabara Carley told Sputnik. The US and EU are manipulating facts to silence the role of the USSR in defeating Nazi Germany. Despite these actions, Moscow continues its efforts to build bridges with the West, as it did in the 1930s.

The genuine history of World War II has fallen prey to numerous falsifications aimed at downplaying and erasing the predominate role of the Red Army in destroying Nazi Germany from people's memories, Michael Jabara Carley, a professor of history at the Université de Montréal and the author of "Silent Conflict: A Hidden History of Early Soviet-Western Relations," told Sputnik.

Commenting on the 79th anniversary of the Munich Agreement concluded by Nazi Germany, the UK, France and Italy on the de facto dismemberment of Czechoslovakia in September 1938, the professor noted that the treaty had become the final blow to the Soviet-led attempts to create a European defensive alliance against Adolf Hitler.

Falsification of History: Transforming Red Army From Winners Into 'Thugs'

The occupation of Czechoslovakia and invasion of Poland in September 1939 by Nazi Germany clearly indicated that the policy of "appeasement" adopted by European countries had failed.

Thus, in late 1939 and early 1940 the British Foreign Office contemplated a "white paper" or "blue book" on Western-Soviet communications, which presented "a highly selective collection of diplomatic papers and other documents" to show "that the blame for failure of the Anglo-Franco-Soviet negotiations [on 'collective defense'] in 1939 lay in Moscow and not in London and Paris," Carley pointed out.

According to the Canadian academic, this compilation marked the beginning of the outright falsification of the origins of World War II.

© Sputnik / Vladimir Presnya
'We Remember Soviet Officers Who Smashed Locks on Gates of Concentration Camps': Israel Rises Up Against Rewriting History
After the beginning of the Cold War the West's attempts to rewrite history got a second wind: "For otherwise how could one justify postwar hostility to the Soviet Union?" the academic asked rhetorically. "You could not after all have a Cold War against the valiant Soviet men and women who defeated the Nazi Wehrmacht."

Therefore "the remarkable soldiers of the Red Army had to be transformed into rapists, thugs and killers." Still it was not an easy task as at that time "British and American public opinion knew very well who was carrying the greatest burden of war against the Nazi Wehrmacht," the academic noted.

"In 1948, the US State Department produced a collection of papers attempting to show that the Soviet Union played a large role in setting off World War II," Carley continued. "Ever since that time the United States and its European 'vassals'… have sought to render [Joseph] Stalin ever present in the origins of World War II and the Red Army, invisible in the conduct of that war."

According to the professor, Poland's current "war" against Red Army monuments is hardly surprising given Warsaw's controversial behavior and outright sabotage of the USSR's attempts to form an anti-Nazi European defensive alliance in the 1930s.

"Poland's destruction of Soviet war memorials is merely one more step in the long western effort to falsify history, to transform history into propaganda and to cover up the Polish role as spoiler of collective security against Nazi Germany during the 1930s," the Canadian academic said.

© AP Photo / Czarek Sokolowski
Polish Ex-PM Miller to Sputnik: Russophobia Becomes Warsaw's State Doctrine
He called attention to the fact that "Poland's role as spoiler has now resumed as it attempts to obstruct good relations between the European Union and the Russian Federation.

"Polish Russophobes cannot bear the memory of 600,000 Red Army soldiers who died during the liberation of Poland from Nazi occupation. The monuments are a constant irritant, a constant reminder of the delinquency and responsibilities of their forebears in the origins of World War II," Carley highlighted.

"The same motives operate in the Ukraine, where the putschist government in Kiev seeks to destroy memories of the Red Army and to rehabilitate Ukrainian fascists and Nazi collaborators," he added.

Remaking History: How US Took All Credit for WWII Victory

As for the US, it tries to capitalize on the World War II victory, presenting itself as a "liberator" and the winner in the war: It "cannot acknowledge the role of the Soviet Union in attempting to organize collective security in the 1930s, or the Red Army's role in the crushing of Nazism because it would undermine American mythology about the Cold War."

"Genuine history would challenge American assumptions about the US having 'won World War II' and about being the exceptional nation, 'that shining city on the hill' which leads 'the free world,'" Carley said, stressing that "present day western hostility toward the Russian Federation and its president are fed by this bogus American and European 'history'."

The professor pointed out that "the Organization for Security and Cooperation in Europe (OSCE) and the Parliamentary Assembly of the Council of Europe (PACE) have taken a lead role in promoting this 'history,'" which resembles nothing but "really crude anti-Russian propaganda."

It is no coincidence that the OSCE proclaimed August 23 (the date of the conclusion of the Soviet-German non-aggression pact in 1939) to be a day of commemoration for the victims of "Stalinism and Nazism," at the same time remaining mute about the implications of the Munich "betrayal" of 1938 and the part the USSR played in eradicating Nazism in Europe.

Carley believes that in some sense Russia's present day foreign policy resembles that of the USSR in the 1930s: Despite the NATO expansion and all-out anti-Russian propaganda in the US and the EU, Moscow still make efforts to build bridges with the Americans and Europeans.

"The failure to join together in the 1930s caused a tremendous human tragedy," Carley said. "Let us hope that the present day impasse in Western-Russian relations does not cause another such tragedy in the future."