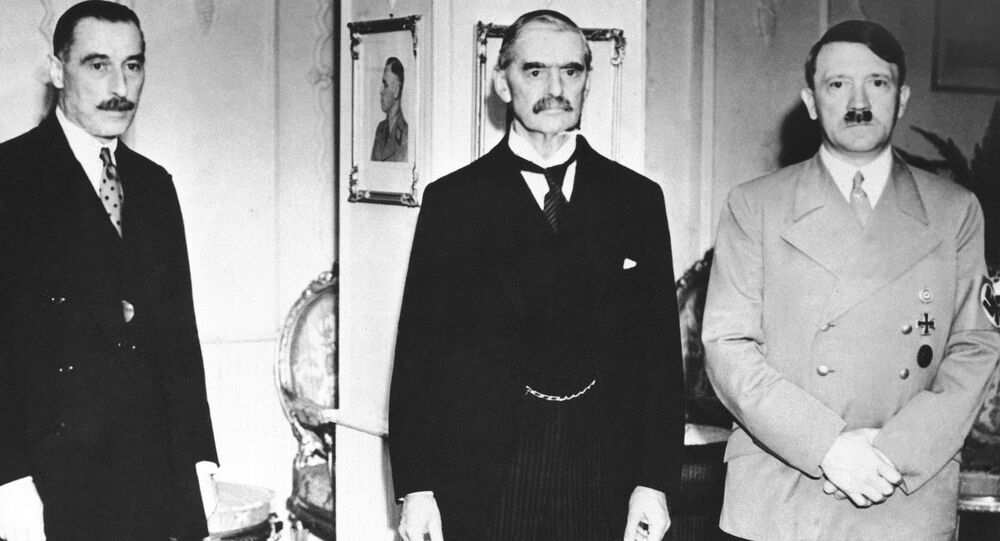 The Munich Agreement of September 30, 1938, concluded by Europe's major powers with Adolf Hitler, allowed the Nazis to absorb parts of Czechoslovakia and hammered the final nail in the coffin of the concept of European collective security pushed ahead by the USSR, Canadian professor of history Michael Jabara Carley told Sputnik.

"Beginning in late 1933, the Soviet government pursued a policy of collective security in Europe.  It was League of Nations jargon, but in reality it was plain old great power alliance building.  The Soviet idea was to contain Nazi Germany, or to defeat it in war, should containment fail.  Soviet diplomats tried to promote their policy just about everywhere in Europe and in the United States. At first the USSR made progress, but one by one, Soviet would-be allies fell away. I call it the Grand Alliance that Never Was," Professor Michael Jabara Carley of the University of Montreal told Sputnik.

The professor pointed out that in France and Britain pragmatists wanted to accept Soviet offers; on the other hand, anti-communists hoped for agreement with Nazi Germany.

© Wikipedia /
Who Controls the Past Controls the Future: Why Does West Hate Stalin?
In his book "Silent Conflict: A Hidden History of Early Soviet-Western Relations" Professor Carley scrupulously analyzes the roots of European elite's enmity toward Soviet Russia and reveals that major capitalist countries have been plotting against the USSR since 1917, when the Bolsheviks came to power.

"It was not just the European elite, but also the American elite, which from the first day sought to overthrow the Soviet government. Their reasons are not hard to identify. These elites were outraged that coffee house 'anarchists' could take power in Russia. It was turning the known world on its head," Carley told Sputnik.

The professor stressed that as for the elites, from their point of view, their alarmism was certainly justified: the Bolsheviks annulled the tsarist state debt and nationalized banks and industries; as a result foreign financiers lost billions.

"The 'Entente' [Allied Western powers] sent troops to the four corners of Russia and they armed and paid White Guard armies to overthrow Soviet authority and to get back their lost investments. If they had succeeded, the West would certainly have turned Russia into another semi-colony like China. White Russian compradors would have served the West much as liberal "oligarchs" did during the 1990s, or still do now," Carley elaborated.

In light of this, the Red Army defended not only the workers and peasants, but primarily the Russian state in its new Soviet guise against Western domination. "Just what Putin's government is doing now," the professor stressed.

After the failure of the Entente intervention at the end of 1920, Soviet-Western relations seemingly improved: each side needed the other for economic reasons, much as is the case today, but Western Sovietophobia obviously hindered the development of a Soviet-Western rapprochement, according to the professor.

"This is why I say that the Cold War started after 1917 and not after 1945," the Canadian academic emphasized.

Western Elite Saw Nazi Germany as a Bulwark Against the USSR

While Western elite demonstrated undisguised aversion toward "unwashed" and "ignorant" workers and peasants, it was at the same time fascinated by the brutal manliness of Nazis.

"Many were sympathetic to Nazism and fascism as a way of controlling unruly workers and crushing communists. Many also saw Nazi Germany as a bulwark against the Soviet Union. There was frequent contact between members of the British and French elites and their counterparts in Nazi Germany," the professor narrated.

© AP Photo / Matt Dunham
British Fascism: Why British Nobility Hailed Adolf Hitler and Nazi Germany
"I also think that many scions of the British and European elite were in doubt about their masculinity during the Interwar Years. I can easily imagine them as "submissives" in a dom's studio in Paris or London. They were intoxicated by the manliness of Nazi Stormtroopers and by the manly odors of fascist sweat and leather. Perhaps it was a form of envy and the desire to emulate the Nazis. I am being a little facetious, of course, but not entirely so," Professor Carley added.

The professor highlighted that from the Soviet diplomatic papers, one gains the unavoidable impression that the Conservative British government was the chief obstacle to building collective security against Nazi Germany. "Even some Western historians would agree [with that]," Carley stressed.

"The perennial question of the 1930s was 'Who is enemy no. 1, Nazi Germany or the Soviet Union?'  Many people in power in the West got the answer wrong. Neville Chamberlain, the British prime minister, never wanted a real war-fighting alliance with the USSR. As I have often said, Chamberlain feared victory with the USSR as an ally, more than he feared defeat at the hands of Nazi Germany," the Canadian academic underscored.

'Only the USSR Has… Clean Hands'

© East News / USA/Science Photo Library
Post WW2 World Order: US Planned to Wipe USSR Out by Massive Nuclear Strike
In his essay "Only the USSR Has… Clean Hands":  The Soviet Perspective on the Failure of Collective Security and the Collapse of Czechoslovakia, 1934-1938," Professor Carley presents a detailed analysis of Soviet Russia's repeated efforts to form an anti-Hitler coalition and the infamous Munich Agreement, also dubbed by historians as "the Munich Betrayal."

Britain played the first fiddle in negotiations with Nazi Germany. When the infamous Nazi Fuhrer made a territorial claim for Czechoslovakia's northern and western border regions, inhabited predominantly by Germans, the British reacted swiftly. On September 28, 1938, Chamberlain proposed the Nazi leader to hold a five-powers meeting in Munich where, as he assured Hitler, Germany would get what it wanted without war and without delay.

"Basically, Chamberlain wanted an agreement with Hitler and so was not interested in making threats against Germany to protect Czechoslovakia. That would have been illogical given Chamberlain's view that Czechoslovakia was an unviable state and could not be saved," Carley told Sputnik.

Embarrassingly for London, when Hitler seized Czechoslovakia's capital Prague in 1939, the British voluntarily handed over nearly $9 million worth of gold that belonged to Czechoslovakia to Nazi Germany.

"If Chamberlain had wanted to stop Hitler, or contain Nazi Germany, the best way to do it would have been in an alliance with the USSR. Unfortunately, that course of action was abhorrent to the British prime minister and his closest advisors. As I say, it was Britain not the USSR which ought to be regarded as having been the main obstacle to collective security against Nazi Germany. Western propaganda (OSCE for example) to the effect that Stalin and Hitler were jointly responsible for the Second World War is rubbish," the professor stressed.

Some Western historians are pointing the finger at Soviet Russia for signing a non-aggression pact with Germany on August 23, 1939. However, they remain silent that earlier similar agreements were concluded between France, Britain and Hitler, at the expense of Czechoslovakia.

© AP Photo /
Untold Story of Molotov-Ribbentrop Pact: Why USSR Inked Non-Aggression Treaty With Hitler
"I think there was a direct link between the Munich accords and the Nazi-Soviet non-aggression pact, it was the Soviet tit-for-tat. The USSR gave collective security one last chance in 1939; that last effort failed because the British and French again dragged their feet about an anti-Nazi war fighting alliance. They were simply not serious or credible. And look at this way, for six years the USSR had promoted collective security with the West. Britain and France in particular repeatedly rejected Soviet overtures and proposals. They were not the only ones however. Poland played the role of spoiler right up to August 1939, attempting to sabotage collective security. Romania backed off seeing that France and Britain would not join a tripartite alliance with the USSR," Professor Carley told Sputnik.

"If you had been Stalin, what would you have done? This was Stalin's policy of appeasement, and that policy did not turn out any better than the Anglo-French version of it. In fact, I would argue it turned out worse. Of course hindsight is always 20/20; historians often forget that what is now in the past was once in the future," Carley remarked.

Although the Soviet Union collapsed almost 25 years ago, Western media continue to beat the cold war drums, accusing the USSR of colluding with Adolf Hitler.

"Why do the Western mainstream media accuse Stalin and Hitler of being two peas in a pod? The answer is simple: the West is using "rewritten" history as a primitive weapon of propaganda to damage the Russian Federation and its president, Vladimir Putin," the professor emphasized.

"In truth, western politicians and journalists cannot get straight whether Putin is the new Stalin or the new Hitler," he noted with a touch of irony.

"Most of them in their ignorance could not tell you the difference between fascism and Marxist communism. It goes without saying that such ideas are preposterous and very dangerous. It is part of a campaign of Russophobia to treat Putin and Russia as "the other," not like the Western "us". It's a form of orientalism or racism," Professor Carley stressed.