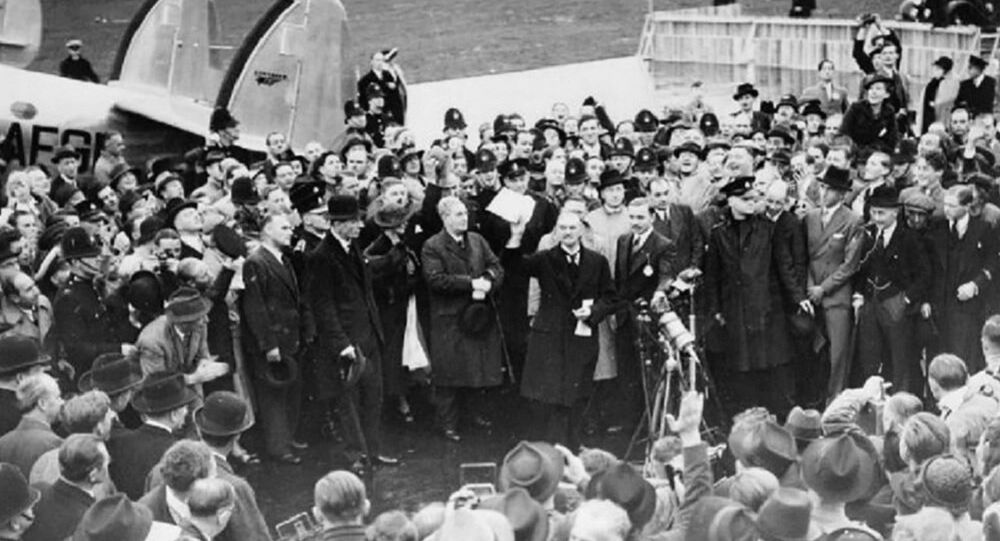 The Munich pact of September 29, 1938, paved the way for Nazi Germany's dominance in Europe and its march eastward, Canadian professor Michael Jabara Carley told Sputnik. Present day efforts to re-write the history of WWII in the West is an attempt to justify grave mistakes committed by European states and pin all the blame on Russia.

The Munich Agreement signed 79 years ago by Nazi Germany, Great Britain, France and Italy wrecked efforts to create an anti-Nazi coalition and opened the door to Adolf Hitler's invasion of Europe and the nightmare of the Second World War, Michael Jabara Carley, a professor of history at the Université de Montréal and the author of "Silent Conflict: A Hidden History of Early Soviet-Western Relations," told Sputnik.

"Munich was indeed a betrayal," Carley underscored. "The loss of the Czechoslovak position in central Europe was thus an important step in Hitler's plan for German domination of Europe."

The Munich Pact as the Beginning of the Nazi Crusade

The Munich Agreement permitted Nazi Germany's annexation of the so-called "Sudetenland" — the regions of northern and western Czechoslovakia inhabited by ethnic Germans, which subsequently led to the occupation of the whole country in March 1939. Naturally, the Czechoslovak government was not invited to the conference.

"Czechoslovakia was a functioning 'liberal' democratic state on Germany's southern frontier. It possessed a well-motivated, well-trained army of approximately 40 divisions. It had a formal alliance with France dating to the 1920s and a mutual assistance pact with the USSR, conditional however on French military intervention on behalf of Czechoslovakia before Soviet commitments were engaged," the Canadian professor pointed out.

© AP Photo /
The Munich Betrayal: How Western Powers 'Sold' Czechoslovakia to Hitler
"Hitler had to eliminate the 40 Czechoslovak divisions before his armed forces could take further action to the east and west," Carley highlighted.

However, the British government led by Prime Minister Neville Chamberlain took efforts to remove this obstacle in Nazi Germany's way, believing "that 'Herr Hitler' was a rational interlocutor with whom one could deal and come to agreement," the academic noted, adding that "Chamberlain's calculations were quickly disproved by events."

The Canadian academic emphasized, "Western elites were not of one mind about the dangers of Nazi Germany to European security." While Chamberlain and his followers deluded themselves into believing that "Herr Hitler" was "a reasonable man," the political opposition in Britain and France viewed the "fuhrer" as menace to European peace and security.

"It was only in March 1939 after the disappearance of rump Czechoslovakia that Chamberlain's position was weakened," the academic said.

However, "for the Anglo-French elites, uncertain of their own force and masculinity, fascism was both intimidating and inspiring. For them, the danger of communist revolution was greater than any danger of Hitlerite Germany," he added.

It was one of the reasons why the Soviet Union's repeated attempts to create a defensive alliance against Nazi Germany had failed, according to the academic.

The USSR Made Every Effort to Form Anti-Nazi Coalition

Carley noted that the Soviet Union had pushed ahead with the plan to create an anti-Nazi coalition since December 1933.

"For nearly six years the Soviet government worked tirelessly to promote collective security in Europe," the Canadian professor highlighted. "Soviet policy was in effect a proposal to recreate the anti-German Entente of World War I, including fascist Italy."

However, Soviet offers of cooperation were spurned in France, Britain, Romania and Poland. The promising rapprochement between the USSR and the US after meetings between President Franklin Roosevelt and the commissar for foreign affairs, Maxim M. Litvinov, in the autumn of 1933 "was sabotaged by the Sovietophobe Department of State."

Carley refuted the assumption that it was "the Stalinist purges" that "undermined Anglo-French confidence in Soviet proposals for collective security": Moscow's key attempts to create an anti-Nazi alliance preceded "the first Stalinist show trial in the late summer of 1936."

The Canadian professor outlined the role of Poland in ruining efforts to form a defensive alliance against Hitlerite Germany.

"Poland never showed any genuine interest in Soviet proposals for collective security against Nazi Germany"… furthermore it was "the spoiler of 'collective security' in Europe during the 1930s," Carley underscored.

"Time after time the Polish government, and most notably the Polish foreign minister, Józef Beck, intervened to block Soviet efforts to build an anti-Nazi alliance," he highlighted.

On January 26, 1934, Warsaw signed a non-aggression pact with Nazi Germany, while "in 1938 Poland was Hitler's accomplice in dismembering Czechoslovakia before becoming Hitler's victim in 1939," the professor pointed out referring to Poland's occupation of Zaolzie in October 1938.

"The Polish elite always considered Russia to be the greater menace, no matter who governed it," the Canadian academic remarked. "Beck was so complacent that he approved the Polish ambassador in Moscow's annual leave as the European crisis was reaching its height in the summer of 1939."

"Poland acted as the spoiler and saboteur right up until August 1939…. One can only conclude that the Polish government brought defeat and ruin upon itself… and far more importantly on the Polish people," the professor suggested.

Despite Poland having been the first to conclude a non-aggression agreement with Nazi Germany, it used the most insulting language while addressing the conclusion of the so-called Molotov-Ribbentrop Pact, the professor noted.

© AP Photo /
Untold Story of Molotov-Ribbentrop Pact: Why USSR Inked Non-Aggression Treaty With Hitler
The German-Soviet non-aggression treaty struck on August 23, 1939, has repeatedly come under heavy criticism from Western historians who denounced it as an example of "Soviet-Nazi" collusion. However, the Soviet Union was the last to ink such an agreement among other European states.

The first on the list is Poland (1934), next came Great Britain, who concluded the Anglo-German Naval Pact in 1935 and inked the Munich Agreement with Berlin in 1938 together with Paris and Rome.

The German-Romanian deal for economic cooperation was signed on March 23, 1939. About two months later, in May, Denmark struck its non-aggression pact with Hitler. The same month Rome and Berlin inked their "Pact of Steel" while in June Nazi Germany signed non-aggression agreements with Estonia and Latvia.

However, the "chronology of the various non-aggression pacts is not the key issue," according to the Canadian professor: The key issue is that "the Nazi-Soviet non-aggression pact was [in fact] the result of the failure of Anglo-Franco-Soviet negotiations for an alliance against Nazi Germany."

When Stalin later observed the Anglo-French hesitance to go to Warsaw's aid when Nazi Germany invaded Poland in September 1939, "he could only have concluded that his putative 'allies' would have left the Soviet Union in similar straits," Carley stressed.

© Sputnik / George Zelma
'Even the Stones Burned': 75 Years On From Worst Bombing of Great Patriotic War
When Word War II was over the question arose as to whom to blame for the catastrophe. Incredible as it may seem, the Western powers pointed the finger of blame at the USSR, the very country that contributed the most to the victory over Nazi Germany and which lost 27 million people during the war.

"When the United States and Britain resumed the Cold War after May 1945 (the Cold War having in fact begun in November 1917), the shameful conduct of the French and British governments and the despicable behavior of the Polish government during the 1930s had to be covered up or 'justified,'" Carley said. "Likewise, the predominate role of the Red Army in destroying the Wehrmacht had to be erased from people's memories."

According to the historian present day western hostility toward the Russian Federation and its president are fed by this bogus American and European "history." However, one should keep in mind that the outcome of WWII was defined not by the Normandy invasion in June 1944, but by the Soviet victory in the battle for Stalingrad in February 1943, the Canadian academic stressed.