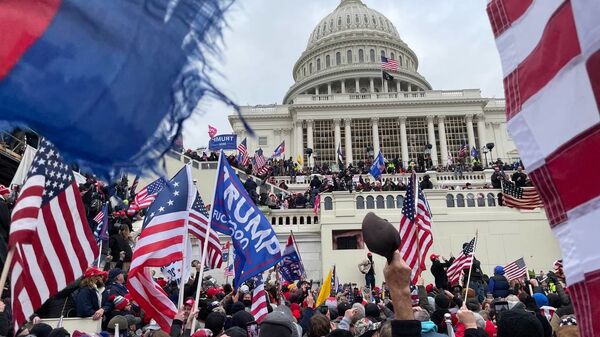 Ilya Tsukanov
All materialsWrite to the author
Washington, DC was thrust into chaos Wednesday as supporters of President Donald Trump stormed the Capitol. Now four protesters are dead and at least six people have been hospitalised, including one law enforcement officer. DC Mayor Muriel Bowser imposed a 6 pm curfew in the city, with a public safety emergency order imposed until 21 January.

Trump’s top national security officials and a deputy White House chief of staff are considering resigning over the president’s alleged encouragement of violence leading to the storming of the Capitol, Bloomberg has reported, citing anonymous sources said to be familiar with the deliberations.

Multiple Trump administration officials have criticised the president for Wednesday’s unrest, accusing him of encouraging his supporters to march on the Capitol. Trump’s decision to gather supporters in Washington, DC for a “Save America”/“Stop the Steal” rally ahead of Wednesday’s crucial Congressional certification of Electoral College votes has also been criticised.

Gabriel Noronha, the State Department’s Iran communications director, blasted Trump on Twitter, accusing him of fomenting “an insurrectionist mob that attacked the Capitol” and trying “to obstruct the peaceful transfer of power”.

O’Brien praised Vice President Mike Pence late Wednesday for ignoring calls by Trump to refuse to “reject fraudulently chosen electors” for Joe Biden, saying it reminded him of Pence’s time as a senator during the 9/11 terror attacks in 2001.

I just spoke with Vice President Pence. He is a genuinely fine and decent man. He exhibited courage today as he did at the Capitol on 9/11 as a Congressman. I am proud to serve with him.

In a related development, NBC News has reported that Trump had barred Pence’s chief of staff Marc Short from entering the White House, ostensibly over the vice president’s refusal to challenge the results.

Early Thursday morning, Trump announced that that while he “totally” disagreed with the outcome of the election, there “will be an orderly transition on January 20th”. The announcement came after Congress formally certified Biden’s victory, with over a dozen senators in the 100 Seat Senate, and about 100 members of the 435 seat House of Representative objecting. The emergency certification came after the procedure was interrupted by protesters storming the Capitol.

Violent Certification: How Pro-Trump Protests in DC Turned Into Chaos as Capitol Building Stormed
Trump has spent the last two months accusing Democrats, the media and big tech of conspiring to steal the election from him, pointing to what he said was widespread mail-in ballot fraud, vote dumps, voting machine ‘glitches’ and other illegal activity. Despite saying that his legal team has “hundreds and hundreds” of sworn affidavits and “thousands” of statements by witnesses, Trump’s election fraud claims have failed to stand up in any state or federal court.

As the situation outside the Capitol descended into violence, Trump called on his supporters to “stay peaceful” and to “remember” that “WE are the Party of Law and Order.” His detractors nevertheless accused him of fuelling violence, and his accounts on Twitter, Facebook, Instagram and Snapchat have been temporarily suspended.

Biden said events in the capital were an indication that “our democracy is under unprecedented assault, unlike anything we’ve seen in modern times,” and suggested that the protesters’ deeds “border on sedition.”

The 3 November election and allegations of voter fraud have left Americans bitterly divided. Last month, a poll commissioned by NPR and PBS Newshour found that just 24 percent of Republicans accept the results, with 28 percent of independents also distrustful of the official outcome.