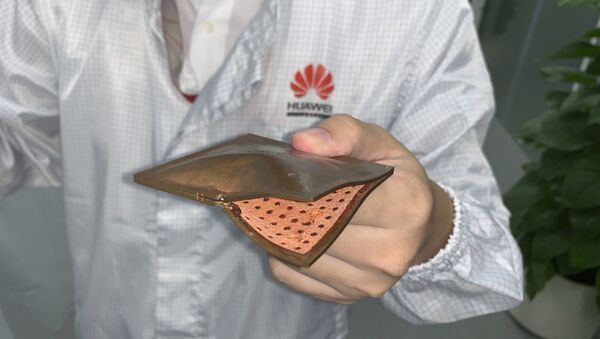 Demond Cureton
All materialsWrite to the author
China has revealed massive levels of investment in mainland technologies amid the ongoing US trade war, with numerous initiatives aimed at replacing US components with domestic ones as the Trump administration cracks down on Beijing's access to the US market.

Abishur Prakash discussed the greater implications of the ongoing US-China trade war, namely the urgency of Chinese firms to decouple from key US technologies amid the ongoing trade war.

Mr Prakash is the world's leading authority on geopolitics and technology, and is a geopolitical futurist at the Center for Innovating the Future (CIF), a tech strategy consulting firm based in Toronto. He has also authored several books, including Next Geopolitics: Volume One and Two, Geopolitics of Artificial Intelligence (Go.AI) and The Age of Killer Robots.

SPUTNIK: The US-China trade war has escalated significantly in recent months, indicating a major crossroads for China's ambitions towards autonomy. Is Beijing ready to build a self-sufficient tech industry and can it weather the storm before reaching such a milestone?

Abishur Prakash: It doesn’t matter if China is or is not ready. It has no choice but to become self-sufficient in technology, and the US tech-based foreign policy has created a new “status quo” for China.

Look at Chinese technology firms. From Huawei to Bytedance to Alibaba, Chinese firms are being forced to play by a new set of business rules that are hijacking their business model and profitability.

For example, Huawei has mulled selling Honor, one of its smartphone divisions, because of restrictions around chips.

Huawei Slams 'Unfair, Unacceptable' Ban From Swedish 5G Networks as US Tech War Campaign Intensifies
The new status quo means China has to calculate things differently, and officials in Beijing realize that, as long as they depend on the US for technology, China’s global ambitions can never be achieved. And, China’s commercial interests will always be vulnerable to a change of tone in Washington.

Of course, becoming self-sufficient in areas like semiconductors, software and servers, will take time, with many bumps along the way. Some Chinese technology firms may go bust or certain Chinese tech ambitions may need to be tempered.

But, it won’t take as long as some suspect for China to catch up. For instance, China’s chip industry is where China’s software industry was a decade ago. Nobody viewed Chinese software as comparable or even close to the American equivalents, but today, Huawei is set to launch its own operating system, HarmonyOS, to replace Android and Windows.

The technology gap between China and the US is shrinking.

SPUTNIK: Several key tech firms have entered buyout talks, including the Nvidia-Arm and AMD-Xilinx deals. Can you explain how such a buyout could affect Chinese firms' access to key technologies? Are Beijing's concerns over a potential expansion of restrictions valid, and how could Trump use this to his advantage?

Abishur Prakash: Nvidia's buyout of Arm comes at a pivotal moment for China. The global chip industry is increasingly becoming “off limits” for Chinese companies, and even non-US firms such as Samsung are giving China the cold shoulder when it comes to chips.

What makes Arm so important is its technology is fundamentally different than other chip technologies. Unlike Intel or AMD, Arm’s technology is used by Chinese firms to build chips. For instance, Huawei chips are based on Arm's architecture, and previously, the British firm has used its origins as a way to circumvent US sanctions to do business with China.

China Reportedly Aims to Pass Draft Export Control Law on 'Sensitive' Tech Amid Trade War With US
But if Arm is acquired by Nvidia, all of this changes. The US could stop the firm from doing business in China and cut China off from chips even more. Many mainland firms using Arm to build chips would lose access, putting tremendous pressure on China’s mobile sector, considering Arm architecture is generally used in mobile devices such as smartphones and tablets.

Considering China’s consumer goods firms are the 'golden children', Beijing may view Nvidia acquiring Arm as crossing a red line and push the Chinese government to block the deal.

SPUTNIK: Following Moore's Law, the global chipmaking industry has become increasingly competitive. What strategies are China taking to procure chips without outsourcing architecture from third-party firms, or violating IP rights and trade restrictions? What would be the best interim plan for such companies while working towards such a goal? How might China go about procuring chips considering has been losing access and many of its technology firms are under pressure (i.e. Huawei)?

Abishur Prakash: China knows that it has to operate at warp speed to procure chips, and it’s already taking steps.

First, China is focusing on attracting the best semiconductor talent, and has already poached more than 3,000 semiconductor experts from Taiwan. More recently, two Chinese chip firms hired 100 former employees from TSMC, the world’s biggest chip manufacturer based in Taiwan, to work on chip projects backed by the Chinese government.

Second, China is turning to open-source chip technologies to circumvent Western companies. For example, Alibaba has unveiled its Hanguang 800 chip for the Internet of Things (IoT) and 5G, built on the open-source RISC-V solution from a US university. Alibaba has also developed its own AI-chips, which it has deployed throughout its business operations.

Third, many Chinese firms are investing in the next era of chips, which isn’t necessarily controlled by the US. An example of this is Horizon Robotics, a Chinese technology firm that’s developed “AI on a chip,” allowing appliances to communicate with one another without the Internet.

AMD in Advanced Talks for $30bn Xilinx Buyout as Nvidia's ARM Deal Uncertain in US-China Trade War
Many Chinese technology firms have geopolitical strategies in place to counter what’s happening on the world stage. Hikvision not only has a plan to replace all US components, but is also developing its own chip production capabilities.

This could mean that chip wars between the US and China are not black and white, and there is far more taking place than meets the eye.

SPUTNIK: Beijing is set to launch fresh countermeasures against Washington to level the playing field in the ongoing trade war. In a worst case scenario, could you tell us a few examples of US firms which depend on Chinese technologies or components, and the impact of countermeasures on their supply chains?

It depends how one looks at technology, where current ones like smartphones, semiconductors, servers and software, are all invented and produced in the US.

US technology dependence on China falls into two camps: supply chains and critical resources, with the former being manufacturing and sourcing equipment and the latter rare earth minerals and lithium.

From 2014 to 2017, China accounted for 80 percent of the US's rare earth mineral imports, which are used in almost every US technology firm, including Apple and Intel.

The picture is not much different with lithium as China controls at least 50 percent of the world’s lithium production, meaning US automotive firms, like Tesla and General Motors, depend heavily on China for their electric car ambitions.

This dependency puts many US firms at risk. If China takes action on resources, like rare earth minerals, it could paralyze many technology firms, but even here, there is a separate possibility emerging.

If China retaliates, it may be business as usual for firms like Apple and Tesla in the Chinese market, but would bring disruption and uncertainty in markets outside the mainland.

So far, we’ve looked at the current era of technology, but numerous Chinese-origin technologies are emerging today.

For example, industrial robot firms such as Siasun are exporting products around the world, and Sogou AI-avatars have been exported to the UAE. While this does not represent the US depending on Chinese-origin tech, it does reveal the world adoption of mainland technologies, which will grow China’s global footprint in new ways and challenge US influence.

SPUTNIK: The Chinese State Council has pledged $1.4tn to build mainland technologies, with venture capital firms posting nearly £600bn. This is a massive level of investment, but can this realise China's dream of self-sufficiency? Has the US got a comparable level of investment outside the $600m in DoD contracts with telecoms and tech companies, or Washington's $1bn R&D fund for emerging tech? What options does each side have?

The US and China are in different positions. The US needs to stop the rise of Chinese technology to maintain its global dominance, and Beijing needs emerging technologies to challenge US dominance.

For the US, it can restrict exports of critical technologies because it does not depend on Chinese technology to the same degree that China does on the US, which is why Beijing is in overdrive, spending hundreds of billions to develop homegrown technologies. The US, on the other hand, has already developed the technologies that China and the world uses.

Of course, both sides are accelerating their drive to diverge from one another. For example, the US Pentagon has been quietly talking with technology companies to figure out how to manufacture advanced chips as tensions grow with China.

Part of these discussions involve building chip factories in the US, similar to those that exist in Taiwan and South Korea. On the other side, China is firing on all cylinders. It’s not just the massive investments China has earmarked, but also the initiatives of its technology companies.

For example, Huawei recently unveiled its “Petal Search” engine, and, while most coverage is that the smartphone app allows Chinese users to find and download banned apps, there is far more to this.

Hi, Where to Next? Huawei Launches Petal Maps, Docs to Rival Google Apps in Major Shift From US Tech
Petal Search is Huawei’s own search engine equivalent to Google Search. It allows users to search for anything and, while it primarily uses Microsoft Bing in markets like Spain and Turkey, the entire search query is handled by Huawei. These are the kind of technology projects that will drive the tech divergence between the US and China.

Except, alongside what Washington and Beijing are doing, is a fundamental question. Do both sides understand where the geopolitics of technology, or what I call 'Next Geopolitics', are taking them? Right now, Next Geopolitics has just begun.

Both sides are already taking radical steps, but this is a long-term game. And, it doesn’t just involve the US or China, but also Japan, India, the United Kingdom, Germany, France, Israel, Australia, Saudi Arabia, the UAE and Russia.

All of this is to say that the geopolitical playbook the US and China are currently working with is not going to be permanent. It will change, perhaps even be completely redesigned, as more phases of Next Geopolitics begin.

000000
Popular comments
Most Western writers described China as "ambitious, compete to win" etc.,etc.. But if you know Chinese culture, Chinese believe in self-improvements, self-reliance and benevolent to other instead of "winning or ambitious" which is revelation of Western aggression and Darwinian blood thirsting competition (not a criticism of Darwin himself). Darwinian dog eat dog world has run its useful course. Humans can only survive by a win-win attitude as practiced by China. In the process, China has a big bat ready to defense against the rabid dogs like the US and the European racists whose culture has been self-defined as being chosen by birth or saved by Christ with impunity to commit crimes against humanity, i.e. exceptionalism to be punished for committing evil acts or to make false accusation against others. When Pompeo claimed he was a Christian and had taught Sunday Schools and Trump was spreading racial hate by waivering a Bible in front of a Christian church, they were giving Christians a bad name.
Sir Percy
27 October 2020, 18:48 GMT3
000000
US is outdated and politicians are corrupt.