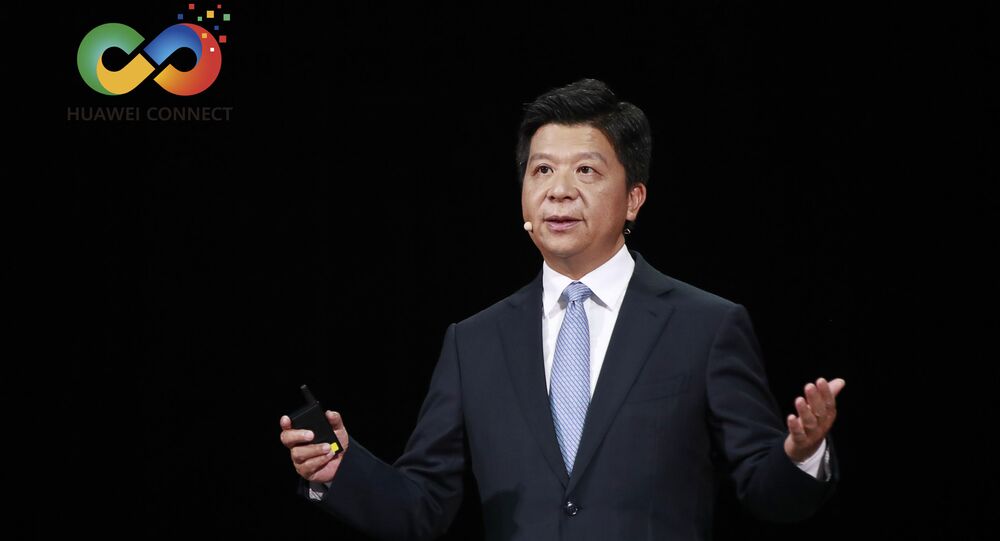 The event comes after launching several key technologies amid the ongoing tech war with Washington, who placed the Chinese tech giant along with ZTE and over 70 mainland companies on an Entity List in May last year, citing alleged national security concerns.

Huawei Technologies will work with partners to build new information communication technology (ICT) systems via five tech domains as part as the company's next phase of growth, rotating chairman Guo Ping said in a speech on Wednesday.

"As more and more governments and enterprises go digital and embrace intelligence, the ICT sector will see incredible potential for growth. We look forward to opening this new chapter together with our partners." he said.

Services such as "ubiquitous" gigabit access to the internet would boost networks to boost business systems of governments and enterprises, he said.

© REUTERS / Mike Blake
Indirect Threats: What Does Nvidia's Buyout of UK Chipmaker Arm Mean For The Chinese Tech Industry?
Guo Ping added that Huawei would work to decouple software from hardware to adapt to numerous processing needs, including architectures such as x86 and Kunpeng, an ARM-based chipset from Huawei's chipmaking wing HiSilicon.

The Shenzhen-based firm had also established cloud services in 23 regions globally for 1.5m developers, and aimed to integrate AI into major businesses systems of government and enterprises, he said.

"Huawei will generate the power, and our partners can harness it. Together, we will succeed and create greater value for our customers," he concluded.

The event is taking place in Shanghai from 23 to 26 September and explores trends in industry digitisation as well as navigating changes in the IT industry. The tech giant revealed a strategy in 2016 to build a digital ecosystem inspired from similar environments in Costa Rica, leading to further gains in cloud services in 2017 and AI in 2019.

The news comes after Huawei announced at the Huawei Developers Conference a major alliance for its Huawei Mobile Services (HMS) platform, with 12 key Chinese tech firms joining the initiative.

© Sputnik / Kirill Kallinikov
Huawei Forced To Adapt To US Trade War Measures With Constant Tweaks To Software, Devices - Founder
The Trump administration's measures have blocked Huawei's access to US chipmakers and other tech firms such as Google and Microsoft, forcing the company to apply for licences to do business with American tech firms.

But Huawei responded by reducing its dependence on US tech companies with its HMS platform and HarmonyOS operating system, which aim to replace Google Mobile Services, Android and Microsoft Windows, among others by 2021.

China's State Council has also launched a $1.4tn initiative to fund domestic technologies such as AI, infrastructure, mainland chipmakers and others, and will reveal further details in the government's 5-Year-Plan in October.