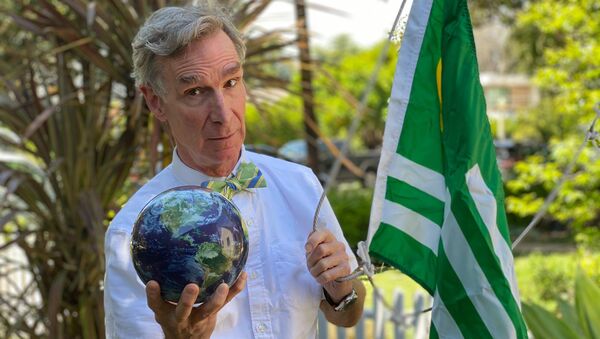 Muhammad Osman
All materialsWrite to the author
Racism contributes to uncountable conflicts around the globe. Recently, the topic of racism saw a sharp resurgence in the wake of the killing of an unarmed African-American man, George Floyd, by white police officers in the United States in May, sparking a wave of anti-racism and anti-police-brutality protests around the world.

In a now-viral video posted Saturday on Chinese social platform TikTok titled ‘The science of skin color’, Nye, originally a mechanical engineer, explains how ultraviolet light contributes to variations of colour in the human skin.

In the beginning, he displays a map of the world coluored with various shades of red, purple, orange, yellow, green and grey resembling the intense of ultraviolet light received from the sun. He states: “The more close you are to the equator, the more intensive the ultraviolet”.

“Now here is the same map of the same continents with just one colour. It turns out that everybody on Earth is descended from people who live here, in Africa,” Nye said, displaying a second map, with dark brown colour that goes lighter as distancing from the equator. “And then as groups of us move around the world, the colour of our skin had to change”.

He argued that the colour of the skin varies due to the amount of ultraviolet received.

“And that’s it everybody. That’s why we have different colours of skin,” Nye said. “We’re all one species, but we’re not treating each other fairly… So it’s time to change things”.

The one-minute video, seen over 6.5 million times on his TikTok page, has been widely shared on other social media platforms, with some Netizens saying, “Bill actually just ended racism”.

“Racism goes beyond the color of someone’s skin. it’s systemic and yes an explanation by bill nye will not end it obviously. it was said to bring attention to the video that is alll [sic],” someone wrote on Twitter.

racism goes beyond the color of someone’s skin. it’s systemic and yes an explanation by bill nye will not end it obviously. it was said to bring attention to the video that is alll

“Bill Nye is fed up. And I’m with him. Trust science. ‘We’re all one species’. I’m here for all of this,” another user tweeted.

Who else thinks we should call Bill Nye the science saint? https://t.co/rlA0z9d8Dk

How long till Trump retweets some white supremacist saying that Bill Nye has made some mistakes? https://t.co/8TPrpX0w41

If you listen closely, you can hear the exploding heads of Trumpists.

Bill Nye is a national treasure.pic.twitter.com/BgAYzk7xQa

Bill Nye out there with truth and no time for bullshit
pic.twitter.com/LkQAIaa5Dk