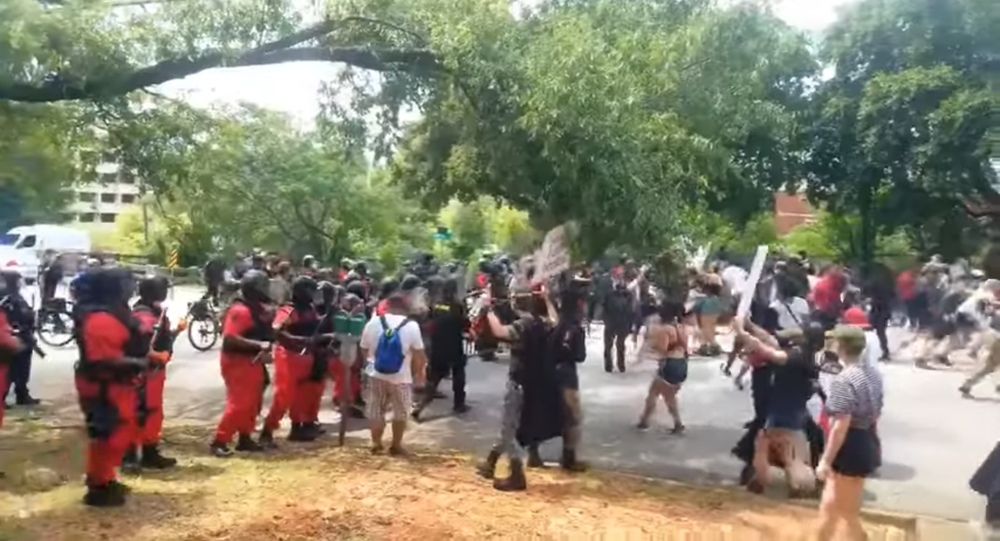 A community organizer in Columbia, South Carolina, told Sputnik that the past seven weeks of militant protests against racism in the face of increasing police repression and intimidation tactics have awakened a new generation to the state’s long history of Black radical struggle.

Kym Smith, an organizer in the ongoing protest movement against police violence and police brutality in Columbia, told Radio Sputnik’s Loud and Clear on Friday that police in the South Carolina capital are continuing to arrest protesters in relation to a curfew imposed during protests on May 30.

‘To Scare and Intimidate People’

“It’s now five weeks outside of that initial protest on May 30, and they are still going back and retroactively jailing protesters and hitting them with higher and higher [bail] bonds,” Smith told hosts Brian Becker and John Kiriakou.

“We’ve had to bail people out twice. You have to pay two different bond amounts. And we’ve had people where police and US Marshals have come to their house to arrest them,” Smith said, noting that some of the bail amounts topped $200,000, as the persons involved were charged with “looting under a state of emergency, disturbing the peace - the same charges as everyone else.”

“We see this constantly, where they’re just putting numbers out there, just as high as they can possibly make it, because they know now that people are bailing them out. They’re trying to make it as difficult as possible,” she said. According to Smith, bail amounts at the time of the first arrests in late May were set at around $250 each, but they steadily increased to $5,000, then $10,000.

“It just kept increasing. A lot of them, they would stop doing percent bonds, and we would have to pay the whole bond,” she said.

“One of the comrades who got arrested, they put him with ‘looting under a state of emergency,’ and he was just giving out water to protesters,” Smith said. “They put this charge on here to make people seem like they’re doing this violent, violent crime when it’s literally nothing. They just do that to scare and intimidate people.”

However, Smith noted that at the time the curfew was announced on May 30, the police made no effort to notify protesters of their obligation to return home and immediately began arresting people. Not only that, she said the police also began scooping up random persons in the Black community off the street and arresting them.

“We had so many people that were, they were just walking, because in the downtown area where everything was going on, it’s a public space, so people that didn’t have anything to do with the protesters were walking from point A to point B, just trying to get to their cars, what have you, and they [the police] just picked them up -  just ‘Why are you out? It’s a curfew, a state of emergency,’ and just arrest them,” Smith told Sputnik.

A State ‘Looked Over’

“One thing about South Carolina is, a lot of money goes into policing. Columbia Police Department’s budget is like, $42 million, and they have all the gadgets from Israel, the toys that are used - the [tear] gas cans actually used at the protests are the same ones that are tested on Palestinians in Gaza. So it is a very militarized police force, and people don’t see it, because South Carolina - we’re very kind of looked over in the national scene, the national conversation about rebellion and resistance.”

“Our police forces, they came out to these protests in like, full-on red jumpsuit riot gear. And they have these huge tanks that they pull out, and people are like, ‘Where did all this stuff come from?’ It’s very, very highly militarized. They’re even using Stingray technology to trick people’s phones,” Smith told Sputnik, referring to equipment that tricks cellphones into thinking it’s a cell tower so it can monitor data passed through it by targeted devices.

However, Smith said there is little help that comes from outside the state, even from national organizations like the American Civil Liberties Union, although she noted the state’s ACLU group is working hard.

“There is this view of the South that is either: the people in the South are super racist and the KKK is walking through the streets just openly, or they think, ‘Oh, it’s just like, such a small Southern wholesome place, nothing ever happens there, nothing bad ever happens.’ Meanwhile, Columbia Police Department in April murdered a 17-year-old child,” Smith told Sputnik.

However, the organizer cautioned that South Carolina has “this radical history” that is often “overlooked.”

“We have that rich, rich history of struggle, but we also have the slave catchers, where police come from, started here in the 1700s. So we’ve always had this history of major repression, but also great, great, great struggle and perseverance and this revolutionary heart here,” she said. “As we’re here at these protests and at this time in South Carolina, you can really see it: you can really see the community coming together and like, really, really, really fighting back against this repression - that’s in us that we’ve been doing for years.”

Smith told Sputnik that despite police attempts at intimidation, the protests are far from over. “People are still getting in the streets, and people are still organizing, and we’re still pushing to defund Columbia Police Department and get justice for this 17-year-old child that was murdered, and get these killer cops jailed. So we’re still out here in the streets, we’re still organizing, and we’re not going to stop. That spirit is here, and we are going to continue to fight, continue to rebel.”