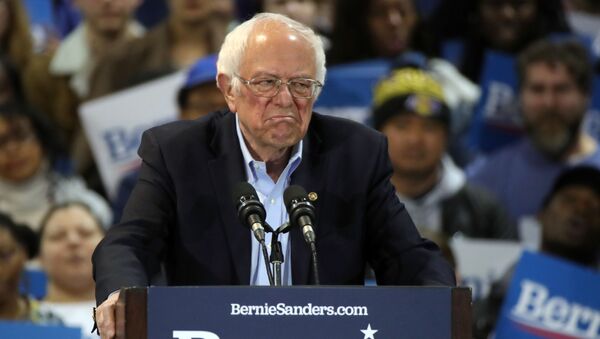 Muhammad Osman
All materials
The development comes as the Vermont Senator firmly makes his way to the biggest event in the race to choose the Democratic presidential nominee, where fourteen US states will hold primaries next Tuesday.

Vermont Senator Bernie Sanders' fellow Democrats are avoiding calling the presidential hopeful a “front-runner”, despite the fact that he is leading the race for the nomination of the Democratic Party for the US 2020 presidential election.

The Senators are arguing that it’s still early to admit that Sanders is likely to win the nomination, as other top candidates, including former Vice President Joe Biden, could see a surge to the top, according to The Hill.

“You know, it’s hard to say. What, about 3 percent, or something like that, of people have voted? So a lot more people have to have their voices heard,” said the Minnesota Senator Tina Smith in response to a question on whether Sanders is the Dem front-runner.

Smith represents the state of Minnesota, where US President Donald Trump is planning to compete this year. “We are going to fight with all of our heart and soul to win the great state of Minnesota in 2020,” Trump told supporters in 2019.

Acknowledging Sanders’s current achievements, Senator Jeanne Shaheen from New Hampshire said that “we have a long way to go” before the end of the race.

“I think it’s a long time until we get to the convention,” Shaheen said, noting that she wants “everybody to have their say.”

According to The Hill, one democratic Senator said that there are “concerns” about Sanders winning the race, arguing that his nomination would make it more difficult for Democrats to win back control of the Senate.

Another Democratic Senator reportedly said that in case none of the presidential hopefuls succeeds in securing the 1,991 pledged delegates, a contested convention could be held.

In the meantime, Sen. Tim Kaine from Virginia acknowledged that the Vermont Senator has the most delegates, following the Iowa and Nevada caucuses and the New Hampshire primary, but argued that giving Senator Sanders the status of front-runner is “premature”.

Recently, Democratic megadonor Bernard Schwartz urged US Speaker of the House Nancy Pelosi and Senate Minority Leader Chuck Schumer to back a candidate, so voters will follow their choice, in an attempt to block Sanders from winning, ahead of the Super Tuesday. Schwartz claimed that Sanders is not “the best person to beat Donald Trump”.

Senator Sanders is currently surging as the top presidential hopeful in the Democratic race. Sanders achieved a decisive victory in the Democratic caucuses in Nevada and the primary in New Hampshire earlier this month.

According to the results of Saturday's primary in South Carolina, Sanders came in second place after Biden, gaining 6 new delegates in addition to his earlier 45.

Biden scored a decisive victory in the South Carolina primary, interrupting Sander's winning streak. The former vice president received an additional 25 delegates to make a total of 40 delegates, ranking second to Sanders, who is in first place with 51 delegates.