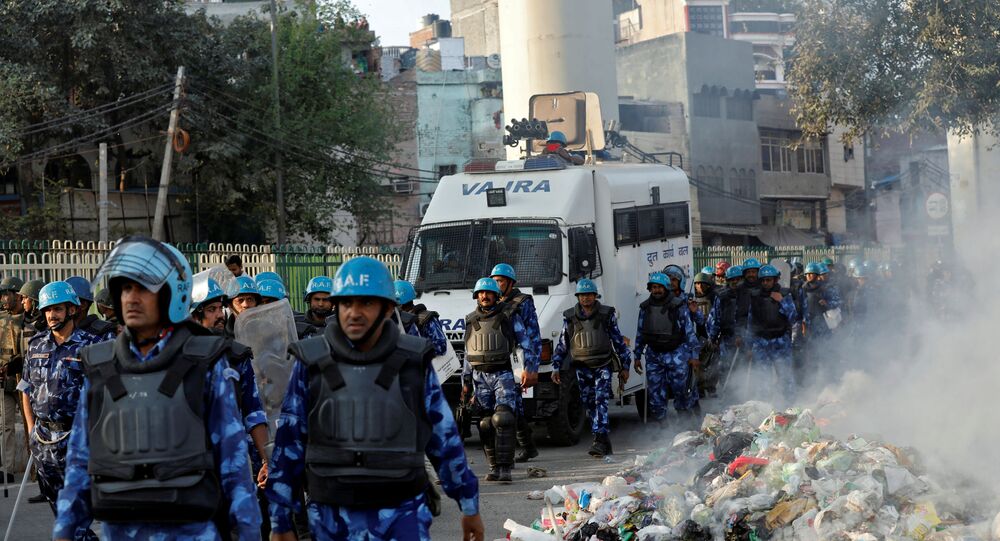 New Delhi (Sputnik): During his two-day visit to India US President Donald Trump refrained from commenting on deadly communal tensions over a citizenship law in parts of New Delhi, saying that "he heard about it but I didn’t discuss" it with Prime Minister Narendra Modi, as it's "up to India".

US Democratic presidential hopeful Bernie Sanders has hit out at President Donald Trump for his response to what the Vermont senator described as “anti-Muslim” mob violence during POTUS' visit to India on 24-25 February.

In a tweet, Sanders slammed Trump by calling his response to incidents of violence in Delhi a “failure of leadership on human rights”:

“Over 200 million Muslims call India home. Widespread anti-Muslim mob violence has killed at least 27 and injured many more. Trump responds by saying, 'That's up to India'. This is a failure of leadership on human rights", Sanders tweeted..

Apart from Sanders, UN Secretary-General Antonio Guterres also expressed concern over the ongoing clashes in India and said he was “saddened by the reports of casualties”.

"The secretary-general is very saddened by the reports of casualties following the protests in Delhi. As he has done in similar circumstances, he calls for maximum restraint and for violence to be avoided", Stéphane Dujarric, spokesman for the UN secretary-general said about the Delhi violence.

During a press conference in India, Trump refrained from commenting on the situation in Delhi when was asked to give his assessment of the clashes in the Indian capital over a new citizenship law.

"As far as the individual attacks, I heard about it, but I didn't discuss that with Modi. That''s up to India", he said.

Meanwhile, the spokesperson of the Indian Ministry of External Affairs, Raveesh Kumar, has commented on remarks made by various media outlets, politicians and institutions regarding the Delhi violence:

“We have seen comments made by USCIRF [United States Commission on International Religious Freedom], sections of the media and a few individuals regarding recent incidents of violence in Delhi. These are factually inaccurate and misleading, and appear to be aimed at politicising the issue. Our law enforcement agencies are working on the ground to prevent violence and ensure restoration of confidence and normalcy. Senior representatives of the Government have been involved in that process. Prime Minister has publically appealed for peace and brotherhood. We would urge that irresponsible comments are not made at this sensitive time", Kumar stressed.

The clashes between supporters and opponents of the recently-enacted Citizenship Amendment Acts (CAA) started earlier this week with stone-pelting, and group clashes in which 30 people were killed and scores of others injured.

While the situation is currently under control, the death toll is expected to rise as some of those hurt in the clashes sustained critical injuries.

India witnessed widespread protests against a controversial citizenship law that was enacted by the federal government in December 2019. So far 53 people have lost their lives in various parts of the country - Assam (5), Karnataka (2), Uttar Pradesh (18), and 28 in the national capital.

The law seeks to grant citizenship rights to illegal immigrants belonging to minority communities from three neighbouring Islamic countries, Afghanistan, Bangladesh, and Pakistan. However, opponents of the law claim that it is discriminatory on religious grounds and against the secular credentials of the Indian Constitution. The federal government has rubbished all criticism, and called the protests politically motivated.