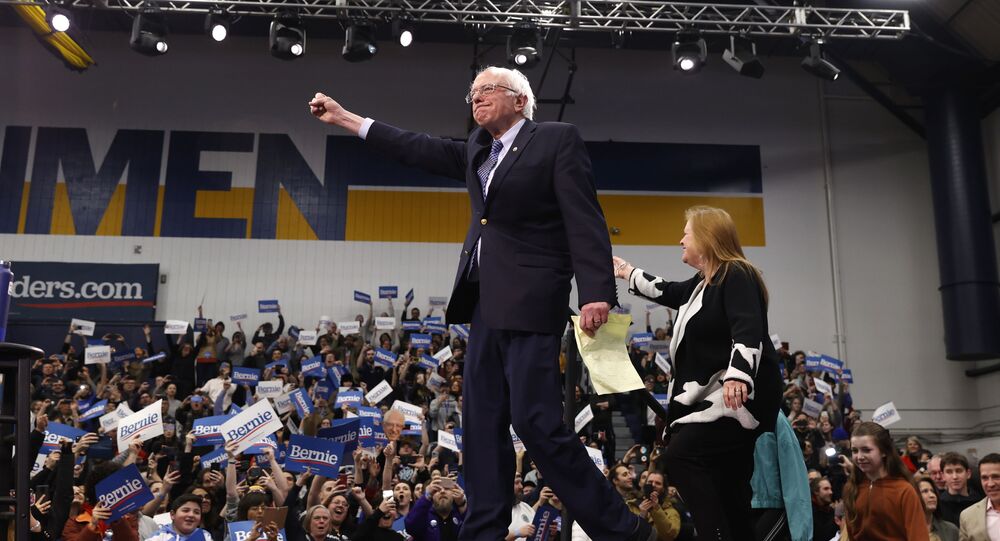 After winning Nevada, New Hampshire and coming in second in Iowa, Bernie Sanders has good chances of coming out on top in South Carolina, according to polls. American academics have explained what's behind the impressive performance of the self-described democratic socialist in the US.

On 29 February, South Carolina will kick off the fourth contest in the Democratic Party presidential primaries with Senator Bernie Sanders, the apparent frontrunner.

On Tuesday night, Sanders received a great deal of criticism from his centrist rivals during the South Carolina debate dubbed by the US media as "messy" and "chaotic". Pete Buttigieg, the youngest candidate in the race, scolded the Vermont senator for his "socialist" agenda. At the same time, billionaire and former New York City mayor Mike Bloomberg referred to speculations about Russia's alleged "interference" to help Bernie's campaign.

American political commentators name several factors which laid the groundwork for the success of the self-described democratic socialist, adding that even his "cons" are playing into his hands.

"I think the big thing that has changed this time for Sanders is that he's more nationally recognised", says Steve Utych, an assistant professor of political science at Boise State University. "Sanders support has been fairly remarkably steady over the 2020 cycle, suggesting that there's not a lot of new information about him that voters really need to base their decisions on. So, what I think is happening here, is that Sanders has a fairly decent base of support, and he isn't really losing any of that to other candidates since he has remained hovering around 20% in national polls since the start".

He notes that the Vermont senator has a unique and clearly articulated agenda so that "most voters can quite easily understand what he is for, and what he is not for". In contrast, other Democratic candidates "have a hard time distinguishing themselves from one another".

"It's hard to see another candidate running in a clear second place right now", the professor points out. "Because of this, it's hard for people who prefer someone more moderate to rally behind another candidate. This leads people who might prefer someone more moderate to really split their support between [Buttigieg, Biden, Bloomberg] and Klobuchar, making it difficult for any one of them to catch Sanders".

The academic also emphasises the support Sanders is commanding among young voters who are "looking for someone to push more liberal policies". According to him, the Vermont senator's identification as a democratic socialist is "probably a big part of his appeal".

I MISSED IT TOO

In 2016, I didn't understand the power of the youth-driven movement #Bernie was building.

Once I opened my eyes to it, I realized it would transform America.

If you're still trying to hold the movement back, I suggest you join it instead. #NotMeUs

Matthew Wilson, an associate professor of political science at Southern Methodist University, echoes Utych and suggests that "overwhelming support from young Democrats" is "the biggest thing that is fueling Bernie Sanders this time around".

According to Harvard Kennedy School's 2019 spring national youth poll, while Bernie polled at 2% in 2016, three years later he managed to win over 31% of young voters.

Explaining the phenomenon, Wilson cites the fact that "young voters have no memories of the Cold War, so the 'socialist' label does not carry the same negative weight with them that it does with their parents".

"Surveys consistently show that Americans under 30 are less religious, less patriotic, less committed to free-market economics, and less concerned with America's global power than are older voters. All of these features play right into Sanders' message", he elaborates, adding that Sanders' controversial economic programme is "not daunting" for the youth "since they have so little wealth themselves".

Bob Beatty, a political-science professor at Washburn University in Topeka, outlines five other factors behind the senator's impressive performance.

According to the political scientist, Sanders "had a leg up going into the 2020 contest and the media and party may have underestimated it".

Second, Sanders has emerged as the only Democratic candidate who managed to put together "a coalition that can help him win both the nomination and a general election: younger voters, Latinos, Democrats, and increasingly, African Americans".

We're building a multiracial, multigenerational movement for real change, and that is how we are going to defeat Donald Trump. https://t.co/1naupmrb1N

Third, what others regard as Bernie's "cons" – "his age, his taking on the establishment, and his unconventional nature - are the very things which helped Trump in 2016, but were heckled by the media and establishment party members", Beatty presumes.

Fourth, many of Sanders' basic ideas, which were largely seen as "radical" in 2016, are now in the Democratic mainstream, the professor highlights, referring to the increase in the minimum wage, universal health care, increased taxes on the rich, and the need to alleviate college debt.

Fifth, Sanders addresses the aspiration of those who intensively dislike Donald Trump: Bernie's anti-establishment style "appeals to many voters who want someone who can take it to Trump directly", the political scientist remarks.

Sanders Still Can be Stopped by Moderate Dems

American conservatives are watching Bernie Sanders heading for nomination with scepticism and anxiety.

Socialist ideas used to be a distinctive feature of academia.

Today, this ideology is exploding like a virus into the larger culture, and it is leading to the rise of Democrats like @BernieSanders.

​On Wednesday, Fox News held an expert panel discussing whether the Vermont senator's "democratic socialism" is actually just "socialism". Revoking the Cold War-era image of the USSR, the observers presumed that Bernie would increase taxes "to ridiculous rates" which would eventually discourage US economic growth, kill job creation and competition in the US.

Steve Utych agrees that "socialism" may not play well in a general election, adding that "there are fair accusations that, if elected, Sanders would not accomplish all he would set out to do".

For his part, Matthew Wilson believes that though Sanders "has cemented himself as the frontrunner for the Democratic nomination", the senator's position "is not as dominant as some have made it out to be".

"Even in Nevada, a caucus, which tends to favour candidates with more committed followings, he was the first preference of only about a third of voters", Wilson highlights. "In Iowa and New Hampshire, his vote share was even less than that. He is benefitting tremendously from a fragmented field, and from the fact that so many more moderate candidates aspire to be the 'last man standing' against Sanders. This is the same dynamic that gave Trump the Republican nomination in 2016".

According to the academic, "the moderate wing of the party still has a chance to stop Sanders" if the Super Tuesday contests "can winnow the field down to two or three candidates". Still, he admits that it's a big "if".

Finally, it also depends "on how willing the Democratic Party is to deny Sanders the nomination, even with a plurality of delegates, at a contested convention", Wilson concludes.