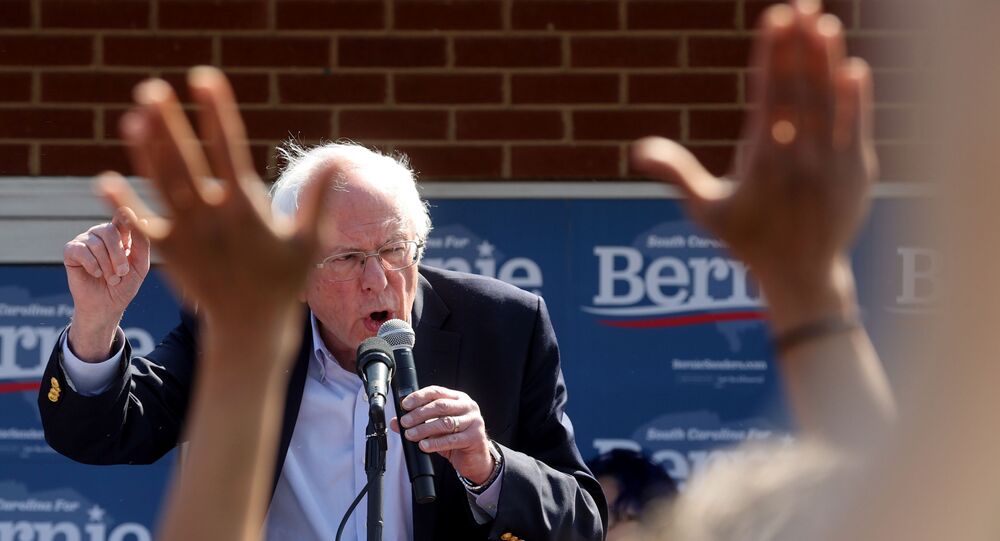 It is understood that sex workers would prefer to see Sanders in the Oval Office because of his support for universal healthcare and his good chance of defeating Donald Trump in the 3 November general election.

The Daily Beast has contacted 30 of the “biggest names in the adult industry” – and while some could not publicly declare their allegiance because of contractual obligations, it is claimed that “more than half” endorsed Bernie Sanders and only one would vote for Donald Trump.

“F**k Bloomberg, Klobuchar is a cop, Steyer isn’t a real contender, Buttigieg is a creepy plant mimicking talking points while skating around the issues, never giving a straight answer,” she told the Daily Beast.

“I’m supporting Bernie because health care is my biggest issue as a voter and he’s the person with the best plan,” said adult actress and activist Sydney Leathers, who famously leaked her raunchy conversations with Congressman Anthony Weiner in 2013, when he was running for New York mayor. “I also believe he has the most motivated base, and the best chance of beating Trump.”

Alana Evans, president of the federally-recognised Adult Performers Actors Guild, said she supported Sanders against Hillary Clinton in the 2016 Democratic primaries and would vote for him again “when given the opportunity”.

Evans also cited one issue that is hardly ever discussed at town halls: the sex worker policy. “Elizabeth Warren, at one point, had created a bill that would’ve potentially taken away the bank accounts of sex workers across the country, under the guise of preventing sex trafficking,” she said.

“I’m tired of seeing politicians use the label of ‘sex trafficking’ to garner attention for their platforms, when they don’t understand that many of the people that are labelled as trafficked are, in fact, consensual sex workers.”

What is Bernie’s take on sex workers' protections?

Warren was one of the co-sponsors of the End Banking for Human Traffickers Act, a bipartisan bill introduced in 2017 that sought to cut human traffickers’ access to finances. Critics warned the proposal would harm not human traffickers but sex workers themselves, and it never passed the Senate.

Warren has since then backed the SAFE SEX Workers Study Act, a bill co-sponsored by Bernie Sanders that calls for the government to conduct a wide-ranging study into the “health and safety of sex workers”. It could also potentially repeal FOSTA-SESTA — a package of two bills adopted in 2018 to crack down on the online sex trafficking businesses. That package was accused by sex workers of actually undermining their online ecosystems, where they used to vet clients and alert each other to dangerous ones, and pushing them onto the streets to seek new clients.

How has Bernie been doing in the primaries?

After winning the popular vote in the three earliest state contests, Sanders, who also has the biggest pledged delegate haul, looks set to come in second in South Carolina on Saturday.

He is also poised to win big in California and Texas, the two largest states to vote in the delegate-rich Super Tuesday line-up of primaries next week, and get the most pledged delegates ahead of the party’s convention due in July.

As a self-avowed social democrat, Sanders’s success this year has reportedly sent the Democratic Party establishment into panic mode, and all other front-runners are willing to block his candidacy with a so-called brokered convention.

If not one candidate arrives at the July convention with a majority of candidates – and the chances of that happening are big, given the number of candidates still running – then the fate of the Democratic presidential nomination will be decided on a second ballot.

This is when all pledged delegates become unpledged (not required to vote in a way that represents the results of state contests anymore) and ‘superdelegates’ can also vote. The latter are party elders and activists who can endorse whichever candidate they choose.

Most of the superdelegates interviewed by The New York Times have expressed an “overwhelming opposition” to nominating Sanders if he falls short of winning a majority of pledged delegates.