© AP Photo / Li Gang/Xinhua
Subscribe
China’s People’s Liberation Army-Navy (PLAN) commissioned six warships in December, helping the fleet to remain technically larger than the US Navy while expanding its ability to project power and bringing it closer to being able to meet Washington toe-to-toe on the high seas.

With the new warships, the PLAN fleet totals some 300 vessels, 10 more than the US Navy’s 290, according to China Power at the Center for Strategic and International Studies (CSIS) think tank. However, the structure of the two fleets is very different, with Washington sporting nearly two dozen aircraft carriers and helicopter landing docks of various types used for blue-water power projection and one-third of PLAN forces being small missile boats used for littoral patrols.

The PLAN’s legion of smaller ships aims to help it secure the vast coastal waterways surrounding the East Asian country, but most importantly the string of islands both natural and artificial it has claimed in the South China Sea. There, the PLAN is buttressed by the expansive Maritime Militia, which James Kraska, a professor and research director in the Stockton Center for the Study of International Law at the US Naval War College, described as “an inexpensive force multiplier” of armed fishing boats and other vessels.

Collin Koh, a research fellow at the S Rajaratnam School of International Studies think tank at Singapore’s Nanyang Technological University, told the South China Morning Post that the size of the PLAN has remained relatively stable in recent years, “but the overall quality of the ships has improved, since each new destroyer and frigate inducted into service, for example, is larger and much more capable than the ones being replaced.” 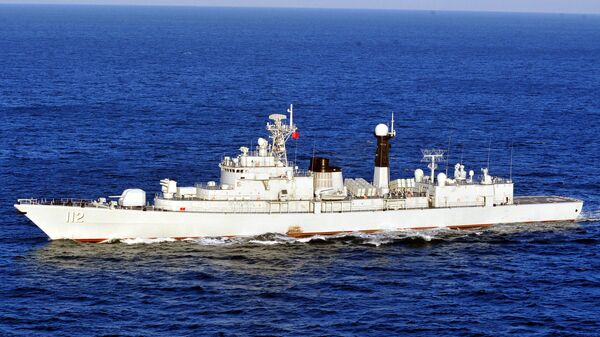 The Type 052 guided-missile destroyer Harbin (Hull 112) attached to a destroyer flotilla with the North China Sea Fleet under the PLA Navy steams in waters off the Yellow Sea during a maritime training exercise in mid-January, 2018
© Wang Guanbiao, eng.chinamil.com.cn

The most recent ships commissioned are all blue-water warships loaded down with missiles, torpedoes and aircraft, as exemplified by the Shandong, which at 70,000 tons is the largest such warship outside of the US and equivalent to the UK Royal Navy’s newest carrier, HMS Queen Elizabeth. The PLAN’s Type 055 is a 12,000-ton guided missile destroyer, the world’s largest of that type, and the smaller, 8,000-ton Type 052D destroyers are just as capable in missile strikes, air defense or anti-submarine warfare.

A December 20 report by the US Congressional Research Service noted that “China’s navy, which China has been steadily modernizing for roughly 25 years, since the early to mid-1990s, has become a formidable military force within China’s near-seas region, and it is conducting a growing number of operations in more-distant waters, including the broader waters of the Western Pacific, the Indian Ocean, and waters around Europe.”

While some of those include military ops, such as the recent joint exercises with Russia and Iran in the Arabian Sea, they also include anti-piracy patrols and escorting commercial vessels through dangerous waterways, such as those near Somalia and the eastern coast of Africa. China Global Television Network (CGTN) noted on Friday the passing of the 11th anniversary of the PLAN’s anti-piracy patrols as well as the expansion of the navy into humanitarian aid, such as that offered to the Maldives in 2014 and Yemen the following year.

“China’s military modernization effort, including its naval modernization effort, is assessed as being aimed at developing capabilities for addressing the situation with Taiwan militarily, if need be; for achieving a greater degree of control or domination over China’s near-seas region, particularly the South China Sea; for enforcing China’s view that it has the right to regulate foreign military activities in its 200-mile maritime exclusive economic zone (EEZ); for defending China’s commercial sea lines of communication (SLOCs), particularly those linking China to the Persian Gulf; for displacing US influence in the Western Pacific; and for asserting China’s status as the leading regional power and a major world power,” the CRS report notes.

​As the report notes, China’s goals in a conflict inside the Second Island Chain - that is, west of the Mariana Islands, Micronesia and Guam - are primarily anti-access/area-denial. In other words, to make it too dangerous for US naval forces to operate there.

To this end, the PLAN and the PLA Rocket Force (PLARF) have specialized in a series of long-range anti-ship missiles that far outpace US anti-ship missiles and even US warship radars. These missiles, with ranges of between hundreds and thousands of kilometers, can be launched from warships, land-based installations and aircraft, including an air-launched ballistic missile fired from a specialized version of the H-6N bomber.

Washington has responded to these plans with a shift toward the “Indo-Pacific,” spelling out in a June strategy report how “a negative shift in the regional balance of power could encourage competitors to challenge and subvert the free and open order that supports prosperity and security for the United States and its allies and partners. To address this challenge, DoD [Department of Defense] is developing a more lethal, resilient, and rapidly innovating Joint Force, and is increasing collaboration with a robust constellation of allies and partners."

The Pentagon report notes that “under the leadership of the Chinese Communist Party,” China aims to “reorder the region to its advantage by leveraging military modernization, influence operations, and predatory economics to coerce other nations,” advising that the US buttress its partnerships with other nations in the region in order to lure them away from China’s heavy soft power influence, which it exercises via economic partnerships such as the Belt and Road infrastructure project.

Not included in the report is how Washington has steadily outsourced patrolling parts of the region to Australia, which has itself embarked upon a massive, $65 billion naval expansion aimed at reducing its dependence upon the US Navy. 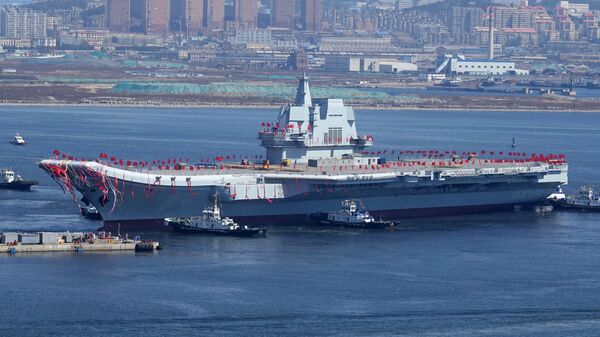 Type 001A, China's second aircraft carrier, is transferred from the dry dock into the water during a launch ceremony at Dalian shipyard in Dalian, northeast China's Liaoning Province, April 26, 2017
© AFP 2021 / STR

Another June report, by the Center for a New American Security, called attention to Beijing’s long-term plan to come from behind, overtaking the US technologically by 2049 in a three-stage program of steadily expanding capabilities.

While the Trump administration has long made a goal of expanding the US Navy’s fleet to 355 ships, the Pentagon has struggled to comply, pushing instead for an attitude not unlike Beijing’s: replace the aging warships with newer ones instead of extending their lifespans. A recent spat between Pentagon planners and the White House’s Office of Management and Budget was uncovered by Defense News, which published portions of a memo showing the aging USS Harry Truman aircraft carrier at the center of a budgetary dispute that would have culled about five ships in total, slowed down some upcoming construction plans and cancelled several retrofits of older cruisers.

The Navy has repeatedly sought to block a costly mid-life refueling that would extend the nuclear-powered Truman’s life for another 30 years, attempting to force the ship into an early retirement in a bid to save nearly $4 billion. At the same time, the Navy penned a contract with shipbuilder Huntington Ingalls for a $13 billion double-buy of the new Ford-class carriers, which will replace the older Nimitz-class ships like the Truman. However, the Trump administration pushed back, cancelling the Truman’s planned early retirement in April and rejecting budget proposals last month that failed to include the ship’s mid-life refueling.

Newly appointed US Navy Secretary Thomas Modly has doubled down on US President Donald Trump’s goal of a 355-ship navy by 2030.