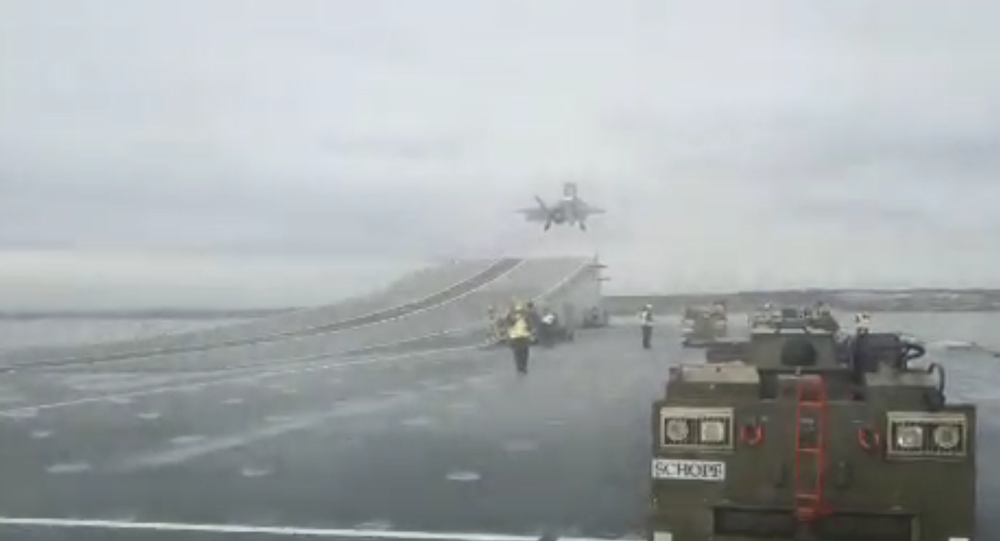 In a video released by the British Ministry of Defense Monday, the Royal Navy’s flagship HMS Queen Elizabeth launched an F-35B Lightning II stealth aircraft off its bow ramp for the very first time.

The Royal Navy’s newest aircraft carrier, the 65,000-ton HMS Queen Elizabeth, has launched its first British F-35B stealth aircraft while at its home port of Portsmouth, in southwestern England.

​The $106 million jet blasted off the bow ramp for the first time Monday afternoon, wowing spectators and inaugurating a new era in British naval aviation. The Queen Elizabeth picked up the new warplanes in the United States and transported them across the Atlantic in her hangars due to a technical problem that prevented them from flying there, according to a news bulletin by Portsmouth Naval Base.

The UK intends to buy 138 of the stealthy, fifth-generation F-35Bs, which possess the vertical takeoff and landing capabilities of their predecessors on RN warships, the Harrier “jump jets,” of which they can carry six times the weaponry and fly nearly twice the speed. In the video, the plane’s thrust nozzle is pointed downward and its stabilizing fan engaged, enabling it to leap from the ship’s takeoff ramp and into the skies.

However, London has just a handful of F-35s at present; the first 48 planes won’t be totally delivered until 2025, according to Sky News.

​The HMS Queen Elizabeth isn’t due to deploy on its first tour of duty until 2021, but when it does, London has already said it will be headed to the South China Sea with F-35s on board. It will carry a maximum of 24 of the jets.

However, even as the RN launches its first carrier-borne F-35, the Ministry of Defense is already exploring what could be the plane’s replacement: the home-grown “Tempest” sixth-generation fighter, which will be still more advanced.