Over the past two weeks, the US and its regional allies demonstratively sailed through the disputed maritime territory, with six vessels including two US guided missile destroyers taking part in 'enhanced interoperatibility' drills last week.

The vessels, christened the Tangshan and the Suzhou, are the 19th and 20th ships in their class, respectively.

Dalian shipyard launched two more Type 052D destroyers todey. They are altogether the 19th and 20th ships of this class and are to be named Tangshan and Suzhou.

The Type 052D is large 7,500 tonne destroyer introduced into the People's Liberation Army Navy in March 2014, and is packed with advanced radar and sonar systems, a 130 mm main gun, and a 64 cell vertical launch system which can be fitted with surface-to-air, anti-ship and anti-submarine missiles. The ship can carry one helicopter.

Over the past two weeks starting on May 2, the US Navy has repeatedly engaged in sailing warships through the South China Sea, a strategic maritime territory which several local states including China lay claim to.

China, which currently controls the vast majority of islands, reefs and shoals in the area, expressed its "resolute opposition" to the passage of two US destroyers near the Gaven and Johnson Reefs in the Spratly Islands at the beginning of the month, with China's Navy calling on the ships to leave the area immediately and warning Washington to stop its 'provocative' behaviour. 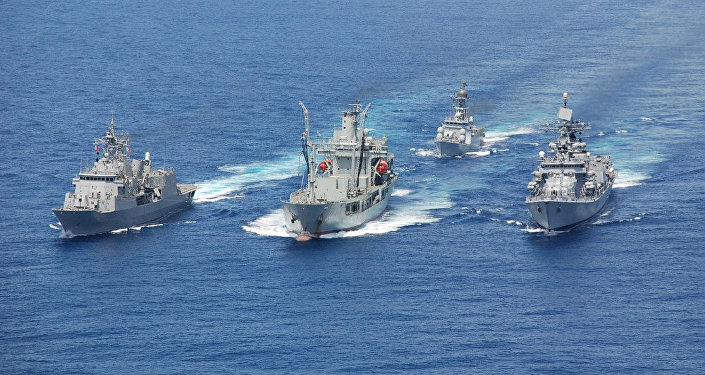 © Photo : Indian Navy
India Joins First-Ever Joint Naval Drill in Contested South China Sea
A week later, US destroyer, two Indian navy ships, a Philippine patrol vessel and a Japanese aircraft carrier engaged in a 'four-way sail-through' in the waterway to engage in 'enhanced interoperability' drills. China called on all four countries not to indulge in actions which Beijing said could undermine peace and stability in the region.

Along with China, portions of the South China Sea are claimed by the Philippines, Vietnam, and Malaysia, as well as Taiwan, an island nation which Beijing considers part of its territory. The waterway is a major strategic passage, with over $5 trillion-worth of ship-based cargo, including much of China's Middle Eastern oil supplies, estimated to pass through its waters every year. Much of the sea territory is also rich with fishing and energy resources. The US has expressed concerns over Beijing's construction of industrial and military facilities on artificial islands in the area over much of the last decade.