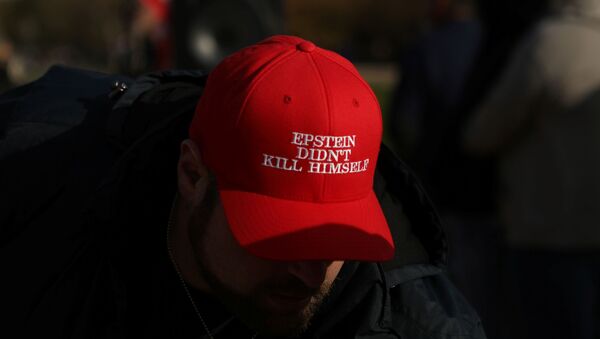 “I can understand people who immediately, whose minds went to sort of the worst-case scenario, because it was a perfect storm of screw-ups,” Barr told the Associated Press in an interview published Friday.

Expounding on the so-called “storm,” the attorney general highlighted that Epstein should not have been left alone in his cell at the Metropolitan Correctional Center (MCC) in New York City.

“I think it was important to have a roommate in there with him, and we’re looking into why that wasn’t done, and I think every indication is that was a screw-up,” Barr said. “The systems to assure that was done were not followed.”

Though Epstein was found alone in his cell, several conspiracy theories have suggested that someone may have murdered the financier before he could testify against his group of high-profile friends, such as former US President Bill Clinton and Prince Andrew, Duke of York - who recently announced he’d be stepping down from public duties shortly after a telling BBC interview.

Initial blame was placed on Nick Tartaglione, a former New York police officer facing the death penalty for a quadruple murder charge, who said he was Epstein’s cellmate until the financier was put on suicide watch after attempting to take his own life on July 23. Epstein was later taken off suicide watch before his death.

"The staff here at MCC had hundreds of inmates to choose from yet I was their first choice,” he said back in September.

“I despise anyone who hurts children but whatever was going to happen to him, I was not going to be a part of it,” Tartaglione said, clarifying that he “never touched the man.” He also revealed that he requested to be moved to a new correctional facility after MCC guards allegedly harassed him.

Earlier this week, correctional officers Tova Noel and Michael Thomas were charged with conspiracy and falsifying records related to Epstein. While the guards were supposed to be checking up on the convicted sex offender every 30 minutes, they reportedly filled their time by sleeping and using their cellphones to shop for items such as motorcycles and furniture.

Montell Figgins, Thomas’ attorney, told the AP that the two COs are being “scapegoated” in the investigation surrounding Epstein’s suicide.

Barr’s comments come one day after Teala Davies filed a lawsuit against Epstein’s estate, claiming the convicted sex offender raped her while she was 17 and inflicted longterm trauma on her.

“It took me a long time to break free from his mind control and abuse. I still have flashbacks. It still hurts,” she said in a statement read at a news conference by Gloria Allred, her attorney.

According to the attorney general, Epstein, despite his death, and his associates will be held accountable for their actions following investigations.

“They are definitely pushing things along,” Barr said in reference to investigators. “I’ll just say there is good progress being made, and I’m hopeful in a relatively short time there will be tangible results.”