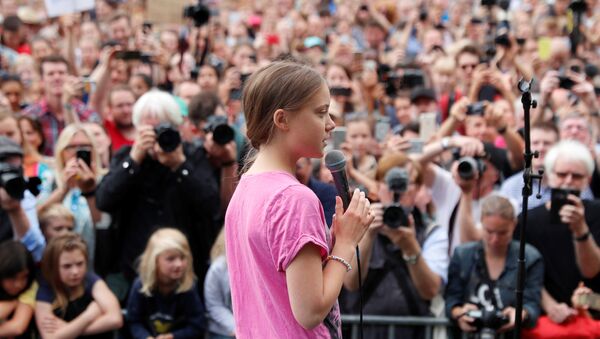 © REUTERS / FABRIZIO BENSCH
Subscribe
International
India
Africa
Swedish teen climate change activist and Nobel Prize nominee Greta Thunberg, known to some as a “guru of the apocalypse”, has been so devoted to her cause to combat climate change that she will set off on her journey to the North American continent in a racing sailboat with no toilet.

The 16-year-old environmental activist, Greta Thunberg, is preparing to cross the Atlantic in a racing yacht, to participate in the United Nations Climate Action Summit in September, Reuters reported on 13 August.

The 60-ft sailing yacht, Malizia II, is not equipped with toilet or shower, but utilizes a blue basket for privacy moments – as a BBC video featuring Thunberg and the yacht that will be used for the 2-week-trip detailed.

“I might feel a bit seasick and it’s not going to be comfortable, but that I can live with it,” the young ecologist said in an interview with BBC, while preparing to start her journey on Wednesday 14. “If it’s really hard, then I just have to think it’s only for two weeks then I can go back to as usual”, she added.

The extreme measures are being taken by the climate campaigner as a means of avoiding air travel and avoiding carbon emissions, as the boat generates electricity by the use of solar panels and underwater turbines.

“This trip across the North Atlantic is even difficult for me,” boat skipper Boris Hermann told BBC, adding, “we really try to do everything to make it as smooth as possible”.

The young campaigner will reportedly be accompanied by her father, Svante Thunberg. The two will reportedly join the UN Climate Action Summit in September follwoing their arrival in New York.

On Monday Thunberg posted a picture of herself in a yacht on her Instagram account signed, “test sailing off the English coast today”.

Greta Thunberg became known to the public after inspiring a series of school protests in 2018 calling for a reduction of carbon emissions in the battle against climate change. She has been criticised by some politicians and lawmakers for creating 'alarm' following her 21 July address to the National Assembly in Caens, France.