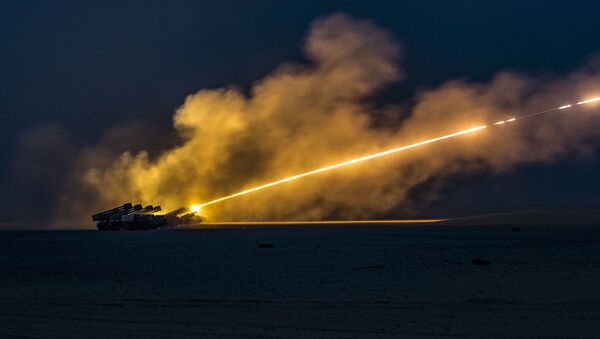 The US Army has delayed the testing of competitors for its new Long-Range Precision Fires (LRPF), the Precision Strike Missile (PrSM), until the end of the year. This allows the Pentagon to avoid breaching the Intermediate-Range Nuclear Forces Treaty, which the US will leave on August 2.

The White House announced earlier this year it was departing the INF Treaty, claiming Russia had violated its terms and beginning the six-month departure process. Moscow has denied the claims. However, as Sputnik reported, the Pentagon has had several weapons that violate the range limits set by the INF in development for years and planned to test those weapons in 2019.

It’s already signed over $1 billion in new weapons contracts since February, when US President Donald Trump announced the US withdrawal process would begin.

On August 2, the treaty between the US and Russia will formally expire, and it will once again become legal for the nations to field ground-launched ballistic and cruise missiles with ranges between 500 and 5,500 kilometers (310 and 3,417 miles). That’s a big deal, since Washington promised it would continue to abide by the treaty’s guidelines even as it said it was leaving the deal.

One such weapon is the LRPF replacement for the Army Tactical Missile System, a weapon dubbed the Precision Strike Missile.

Acting US Defense Secretary Mark Esper has long trumpeted the LRPF as the Army’s number one priority.

“In the event that Russia does not return to compliance with its obligations under the Intermediate-range Nuclear Forces Treaty (INF) by the August 2, 2019, deadline, we should pursue development of ground-based, conventional, intermediate-range missile systems,” Esper said in a written response to US senators’ questions earlier this week. “Failing to do so could cause allies and others to question our resolve in ensuring Russia cannot achieve a military advantage through its INF violation.”

Defense contractors Raytheon and Lockheed Martin are competing for the lucrative contract, which aims to provide the US military with a ground-launched missile with "deep strike capability" that can "reach farther than 300 kilometers (186 miles)," according to an Army info sheet that is otherwise very sparse on details. However, Sputnik reported last October, citing Col. John Rafferty, director of the Army’s Long Range Precision Fires program, that the PrSM will have a range of roughly 310 miles - bringing it right up against the limits set by the INF.

Rafferty said at the Center for Strategic and International Studies on Thursday that the delay was caused by “a couple of technical issues” and not because the US hadn’t left the INF yet, Breaking Defense reported.

Rafferty said the Pentagon hopes to use the PrSMs as a new generation of anti-ship missiles, too, and the Army was looking at how to extend the missile’s range beyond 499 kilometers. Sea-based weapons were never bound by the INF Treaty; however, if the anti-ship variant can so easily have its range expanded, so can the land-based version.

“Getting out to longer ranges won’t be that hard for either Raytheon or Lockheed,” Defense News said, paraphrasing Rafferty’s comments, who noted that range “will be one factor for evaluation” of the competing designs.

The INF Treaty was drawn up in 1987 to address the crisis created by the US stationing of Pershing II missiles in Western Europe. The nuclear-armed ballistic missiles could traverse the 1,000-mile distance from Germany to Moscow in roughly six minutes. With so little time to evaluate a detected threat and react appropriately, the missiles dangerously increased the likelihood of an overreaction or a misstep. Indeed, realistic NATO war games in 1983 very nearly precipitated such a crisis, with the Soviet commander who believed he’d detected a missile launch luckily second-guessing his own instruments and declining to reply in kind.

The Pentagon hopes to complete testing of the PrSM and have it deployed in the field by 2023 - four years earlier than originally planned. The missile will be deployed on the Army’s HIMARS and MLRS mobile rocket launch systems.