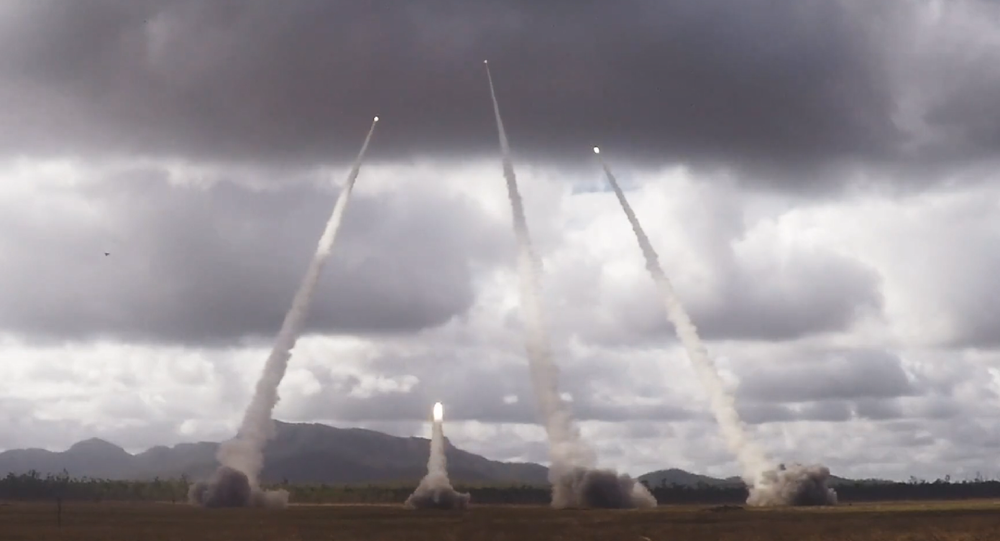 Servicemembers from the US Air Force and Marine Corps demonstrated to their Australian counterparts one of the US military’s most complex maneuvers - the HIMARS artillery raid - along with other military operations.

A platoon of US Marines based in Okinawa, Japan, brought three M142 High Mobility Artillery Rocket System (HIMARS) rocket launchers to Australia’s northeastern Queensland territory last weekend to take part in Exercise Talisman Sabre 2019, meeting up with a total of 34,000 servicemembers from the US Air Force, Australian Army and Australian Royal Air Force for the biennial drills.

The exercises last from June through August.

While the allied forces practiced numerous maneuvers, the highlight of the trip was the HIMARS Rapid Infiltration (HIRAIN) operation.

“HIRAIN at its core is an artillery raid, specifically using an aircraft,” a US Army bulletin notes.

“HIMARS deliver precision rocket and missile fires through an expeditionary platform equipped with Hot Panel Software. This software provides HIMARS the ability to load an aircraft, travel to a distance location while maintaining GPS signal, and unload the aircraft in a firing capable status,” the bulletin explains.

US Air Force C-130J cargo planes from Okinawa dropped the rocket systems off during the operation, a Marine Corps press release noted.

The Marines used live-fire reduced-range practice rounds, Stars and Stripes noted, but the results were no less impressive for that. HIMARS’ maximum range is 190 miles.

“All the folks out there were very impressed at what it can do,” 12th Marines commander Col. Mike Roach told Stars and Stripes.

Marine Corps Master Sgt. David R. Morgan, a field artillery chief, told UPI, "It allows all areas of the Marine air-ground task force to assist in timely and accurate fires that will help defeat all future enemies. It is a chance for us to actively get involved with them, to learn from them, and a chance for us to grow as a unified force ready to respond to any crisis."

The Army also plans to use the HIMARS as a platform for its “number one priority,” the Long-Range Precision Fires (LRPF) missile in development since 2017, designed to give the force “deep strike capability.”

Following the exercises, the Marines will stay in Australia to take advantage of the room to practice maneuvers, moving to remote Darwin to test their HIMARS in the desert.