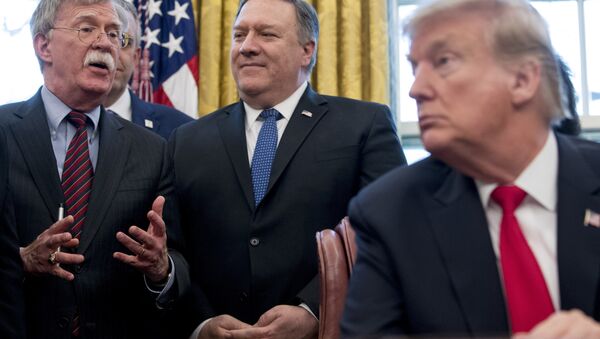 © AP Photo / Andrew Harnik
Subscribe
International
India
Africa
Ekaterina Blinova
All materialsWrite to the author
The US is increasing pressure against Iran, prompting concerns that the ongoing war of words may translate into an armed conflict. Former Reagan administration official Dr Paul Craig Roberts and CIA veteran Philip Giraldi have shared their concerns over the US administration officials' apparent attempt to ignite a clash in the region.

Tensions continue to simmer in the Persian Gulf, with the war of words between Iran and the US heating up.

On 15 May, Iranian Defence Minister Amir Hatami stated that Tehran had "the highest level of defence-military preparedness to confront any type of threat" from the US and Israel. The statement came on the heels of reports of a US military build-up in region.

"The US is putting pressure on Iran by the build-up", opined Philip Giraldi, a former CIA counter-terrorism specialist and military intelligence officer. "[Donald] Trump believes that it will make Iran submit without any fighting, but Bolton wants an incident of some kind to happen to start a war".

Thus, the US president tweeted on 15 May that he was sure that Iran "will want to talk soon."

​Still, while Trump has recently denounced The New York Times' report that the US administration was mulling over sending 120,000 troops into the region as "fake news", Washington has substantially beefed up its military presence in the Middle East.

The Pentagon has deployed B-52 Stratofortress bombers as well as a Patriot missile battery, the Abraham Lincoln Carrier Strike Group, and the Arlington amphibious transport dock to the region. According to Air Force Times, US military aircraft began flying deterrence missions in the Middle East on 11 May.

A False Flag in the Persian Gulf?

Meanwhile, Saudi Arabia's state-run media reported 13 May that two of its oil tankers had been damaged in what it called a "sabotage attack" while approaching the Strait of Hormuz.

On 14 May, Riyadh sounded the alarm over a reported drone attack against two of its oil pumping stations which occurred two days after the alleged oil tanker "sabotage". The New York Times wrote on the same day that Houthi rebels had claimed responsibility for the Tuesday attack on Twitter. However, the US pointed the finger of blame at Iran for the alleged attacks.

Like Giraldi, Dr Paul Craig Roberts, economist, author, and former US assistant secretary of the Treasury for economic policy under President Ronald Reagan, believes that the recent developments resemble nothing less than a false flag operation.

"The attack, if it occurred, was too minor to be of any consequence, but [National Security Adviser John] Bolton blamed it on Iran", Dr Roberts said.

According to the former US official, "using the same format of lies that was used against Iraq, Libya, Syria, and Venezuela, Bolton has accused Iran of preparing to attack US forces in the Middle East".

Bolton is Not Playing a War of Words

"Bolton has ordered Patriot missile batteries, an aircraft carrier strike group, and a bomb strike force to the region. Bolton is not playing a war of words. Bolton intends these forces for use, not simply for show", the former American official opined.

From 1953 Coup to Bolton's Vow: Why US Regime Change Op in Iran Won't Work
Dr Roberts drew attention to the statement of a high ranking British general, Christopher Ghika, a deputy commander in the US/UK Joint Task Force in the Middle East, who said that "there's been no increased threat from Iranian-backed forces in Iraq and Syria." However, the US Central Command rebuked the British general.

"Unless Bolton is stopped by President Trump, the US Joint Chiefs of Staff, or by opposition from Washington's NATO vassals, Bolton and Israel will continue to work toward a false flag attack that can be used as the excuse for attacking Iran", the former Reagan administration official warned.

Bolton has long been pushing the idea of regime change in Iran. On 1 July 2017, Bolton pledged to "change the regime" in Iran by 2019 at a gathering of the dissident group Mujahedeen Khalq, known as MEK. A year later, on 9 April 2018, he was appointed as a national security adviser to Trump.

Analyst: US, Israel Formed 'Highly Professional Working Group' Against Iran
In May 2018, US President Trump unilaterally withdrew from the Joint Comprehensive Plan of Action (JCPOA), commonly known as the Iran nuclear deal, and started re-enforcing sanctions against the Islamic Republic.

During the recent high-level meeting in Sochi with the Russian delegation, US Secretary of State Mike Pompeo made it clear that the US fundamentally does not seek a war with Iran.

According to Dr Roberts, Moscow "can prevent the attack if they make it clear in their meeting with US Secretary of State Pompeo that Russia will not tolerate an attack on Iran". Otherwise, a false flag event could occur and Iran still could be attacked, he warned, referring to the mounting US pressure on Tehran.