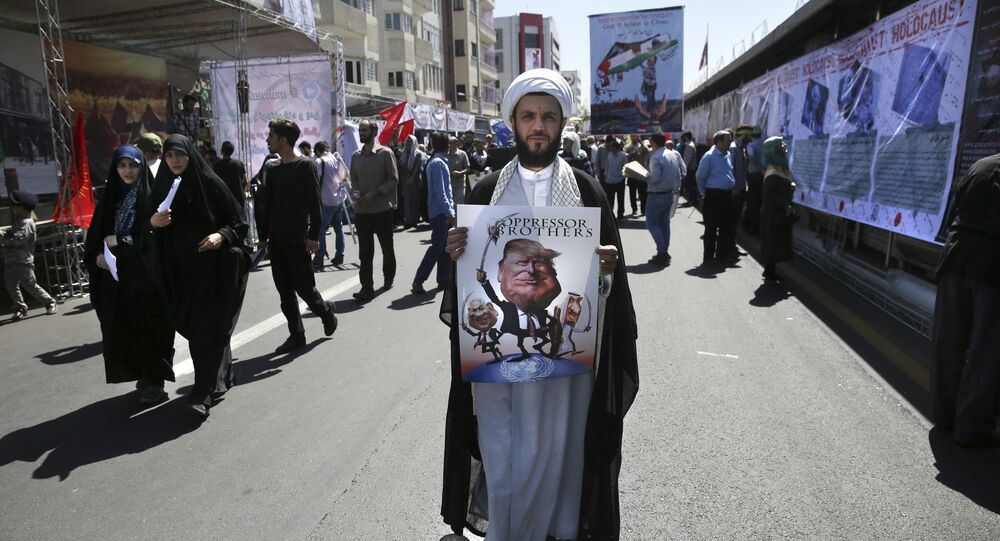 While US Iran hawks in the White House are talking about a potential coup d’état in Iran, the long record of Washington's interference in the Middle Eastern country shows that the previous administrations' efforts to influence Tehran have repeatedly ended up messy.

The idea of a regime change in Tehran is gaining momentum in Washington following Donald Trump's exit from the Joint Comprehensive Plan of Action (JCPOA), commonly known as the Iran nuclear deal.

© AP Photo / Ebrahim Noroozi
Nuclear Deal With Iran 'Dead': US Aims for Regime Change in Tehran – Analyst
Actually, Giuliani echoed John Bolton, who pledged to "change the regime" in Iran by 2019 at the gathering of the dissident group Mujahedeen Khalq, known as MEK, on July 1, 2017. Bolton was appointed as National Security Advisor to Trump on April 9, 2018.

Yet another Iran hawk is Mike Pompeo, the newly-appointed secretary of state, who proposed not only kicking off a coup in Tehran, but also bombing the US rival.

As Stephen M. Walt, professor of international relations at Harvard University, noted in his May 8 op-ed for Foreign Policy magazine that "the siren song of regime change, which US hawks and other anti-regime forces have been pursuing for decades" is at the core Trump's decision to rip the Iran deal up.

Regime Change in Iran: From Mossadegh's Ouster to Bolton's Vow

"President Obama purposefully negotiated an arrangement that flouts the requirement to get Senate approval for a treaty. He did so knowing that the Senate would never approve the document(s) ultimately signed," he suggested.

Ortel stressed that while he accepts that "US historical interference in the internal affairs of Iran has had many unfortunate consequences," he also believes that "the Iranian people deserve free and fair elections so they may determine, at long last, their own true destiny."

© AP Photo / Carolyn Kaster
Crude, Blood, Turmoil: Story of US First 'Successful' Overseas Regime Change
In fact, Washington's inability to maintain collaborative relations with Tehran goes back to the 1953 coup d'état in the country. In June 2017, declassified CIA documents showed that the US played a substantial role in orchestrating the regime change operation involving Shia Muslim clergy which led to the ouster of the legitimately-elected cabinet, headed by Prime Minister Mohammed Mossadegh.

The monarchy in Iran was restored, Mossadegh's reforms abolished. However, the US interference later bore bitter fruits, leading to the Islamic Revolution of 1979 and the suspension of relations between Washington and Tehran.

© AP Photo / Uncredited
In this Dec. 13, 1951 file photo, crowds of supporters of Prime Minister Mossadegh gather around a huge portrait of Iranian Mullah Kashani, one of the powerful backers of Mossadegh's regime, in Tehran. Once expunged from its official history, documents outlining the U.S.-backed 1953 coup in Iran have been quietly published in June 2017, by the State Department, offering a new glimpse at an operation that ultimately pushed the country toward its 1979 Islamic Revolution and hostility with the West.

"Accepting that Republicans share guilt, the vexing current problems in Iran fall on the shoulders of America's worst president — Jimmy Carter (1977 — 1981) — and his incompetent advisors," Ortel opined. "The damage Carter did supporting radical Shia fundamentalism was then further mangled by all successive presidents until the current one, who may yet actually achieve peace in the Middle East."

The US continued its efforts to meddle in Iran's affairs by providing military aid and financial support to Baathist Iraq headed by Saddam Hussein during the Iran — Iraq War (1980-1988). Feeding Hussein with tactical intelligence and being aware that Iraqi forces would use sarin gas against Iranian military personnel was one of Washington's controversial practices during the war.

"The administrations of Ronald Reagan and George H.W. Bush authorized the sale to Iraq of numerous items that had both military and civilian applications, including poisonous chemicals and deadly biological viruses, such as anthrax and bubonic plague," Michael Dobbs of The Washington Post reported in December 2002.

Thus, it is hardly surprising that an anti-American sentiment has long been flourishing in Iran.

"In contrast to other approaches, the Trump Administration has already made enormous progress encouraging moderation inside Saudi Arabia, and tolerance/trade with Israel and the West, while aggressively striking against radical Islamists in many places," Ortel argues asking "what is wrong with the Iranian people voting to build a tolerant, possibly secular state, in truly free, fair elections?"

© AP Photo / Carolyn Kaster
How US Meddles in Other Nations' Elections 'in the Interests of Democracy'
Besides serious ethical concerns regarding a regime change operation per se — especially fomented by foreign actors — the question arises as to why the Trump administration's Iran hawks believe that this time a coup d'état would play into their hands. An attempted coup in Turkey and efforts to topple Syria's' legitimate President Bashar al-Assad indicate that these controversial efforts do not always work.

At the same time, Trump's crackdown on Iran appears to be nothing less than the continuation of George W. Bush's policy described in a 2007 op-ed entitled "The Redirection" by Pulitzer Prize-winning investigative journalist Seymour Hersh.

In his article, Hersh explained that after the 2003 US invasion of Iraq and the overthrowing of Saddam Hussein, the Bush administration found itself on the horns of a dilemma, as "the most profound-and unintended-strategic consequence of the Iraq war [was] the empowerment of Iran."

The journalist wrote that the White House decided to focus on undermining Tehran through clandestine operations in Lebanon, Syria and Iran, adding that "a by-product of these activities has been the bolstering of Sunni extremist groups" as well as the deepening of sectarian divisions between Sunnis and Shiites.

Actually, the Obama administration followed its predecessors' suit by exerting substantial pressure on Damascus by providing support to jihadi extremists, while its successors in the Trump cabinet have dealt a blow to Iran by exiting the JCPOA.

However, the picture seems to be much broader. In 2007 retired US Army General Wesley Clark, a former Supreme Allied Commander Europe of NATO, remarked in his speech at the Commonwealth Club of California that in 1991, then-Undersecretary of Defense for Policy Paul Wolfowitz told him that the US had "five or 10 years to clean up [former] Soviet client regimes in Syria, Iran and Iraq before the next great super power comes on to challenge us."

Paul Wolfowitz is well known for the so-called "Wolfowitz Doctrine" — an unofficial title given to the initial version of the Defense Planning Guidance for the FY1994 — 1999. The post-Cold war doctrine said the US should "prevent any hostile power from dominating a region whose resources would, under consolidated control, be sufficient to generate global power." The Middle East and its energy resources have long been in the focus of US war planners and strategists.

While pondering about American Iran hawks' potential regime change scenarios, Walt remarked that sanctions and massive protests are unlikely to topple the government in Tehran, while "leaving the JCPOA isn't going to bring Iran to its knees."

"What if I'm wrong and the clerical regime did collapse? As we have seen in other settings, the result is not likely to be a stable, well-functioning, and pro-American regime," the American academic remarked.

He noted that US interventions in the Middle East could hardly be called successful: "US-sponsored regime change in Iraq led to a civil war, a brutal insurgency, and the rise of the Islamic State [Daesh*]. Ditto with foreign-imposed regime change in Libya." The academic underscored that Washington has also intervened in Somalia, Yemen, Afghanistan and Syria, "and all it reaped was additional instability and fertile ground for terrorists."

China Calls for Restraint in Wake of Israel-Iran Fire Exchange