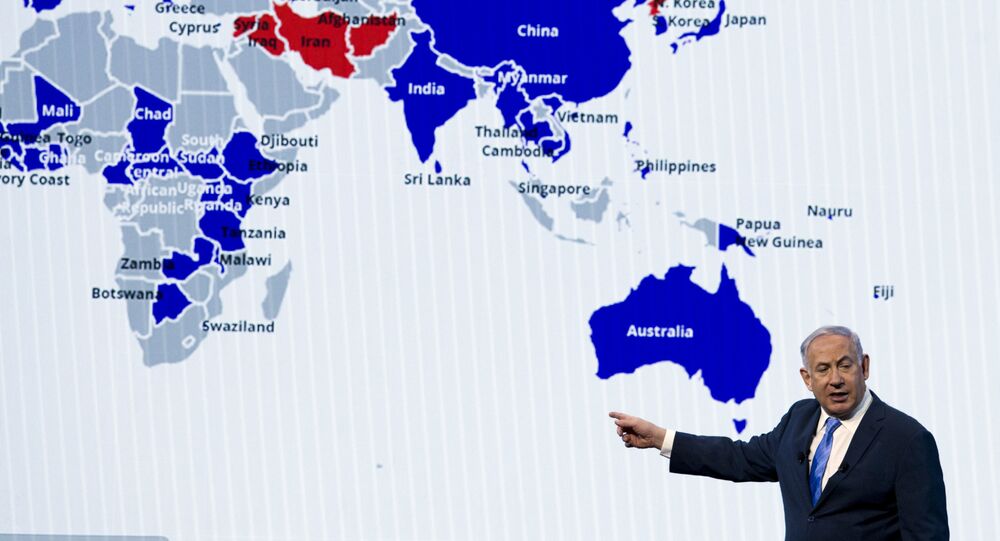 It appears that Washington and Tel Aviv are going to step up pressure on Iran. According to some reports, the US and Israel have formed a special team to support the protest movement inside the country. Speaking to Sputnik, analysts shared their views on the alleged US-Israeli plan.

Citing unnamed Israeli officials, Axios announced on July 3 that the US and Israel had established a joint team to exert pressure on the Iranian government and encourage protests in the country. The Israeli government and the White House declined to provide comments on the issue to Axios.

Speaking to Sputnik, Israeli political analyst Avigdor Eskin noted that initially "the only source for this information is Channel 10 of Israeli TV," but "then it was checked and picked up by Maariv and few other media resources."

He stressed that "the coordination between Israel and the US is underway now and there is a highly professional working group."

Explaining Israel's rationale, the political analyst claimed that "Iran is spending around one billion dollars per year on Hezbollah and Hamas — fiercely anti-Israeli militants."

"The new policy will be directed towards increasing internal unrest in Iran," Eskin highlighted, adding that "Israel has not been involved in this up until now."

© AP Photo / Hasan Jamali, File
Iranians Believe Trump-Saudi Deal on Oil ‘Part of Regime Change’ Plot – Prof.
The political analyst noted that "the anti-Iranian sanctions are working better than the team of President Trump has thought." However, he suggested that Washington and Tel Aviv are seeking to exert additional pressure on Iran and "then negotiate with Tehran on all the important matters."

"The joint team under the guidance of John Bolton and of Meir Ben-Shabat is rather a sign that regime change will be the goal," he presumed. "Both of them are unique professionals. According to my sources and my understanding, they will not deal so much with internal protests in Iran. No need."

READ MORE: From 1953 Coup to Bolton's Vow: Why US Regime Change Op in Iran Won't Work

'US, Israel are Pursuing All Available Options'

"Since 1979, Iran's leaders have continuously made bellicose threats against Israel and against the United States. Given the manifestly close relationship between the Trump Administration and the Netanyahu Administration, one imagines America and Israel are pursuing all available options with regard to Iran, including the harshest of economic sanctions," the Wall Street analyst opined.

He emphasized the difference between the Obama and Trump administration's approach to Tehran.

"Donald Trump's first foreign trip sent clear signals that America is on a very different path than the one followed so unwisely by Barack Obama, Valerie Jarrett, Hillary Clinton, and John Kerry. The Trump Administration is thinking Americans want the best for the Iranian people," he said.

According to Ortel, the issue of the Iranian presence in Syria and other topics related to the Middle Eastern state are likely to come into focus of the upcoming Helsinki meeting between President Vladimir Putin and his American counterpart Donald Trump on July 16: "We must hope that relations with Iran will be a weighty topic for discussion in Helsinki, where both of our leaders may harness their special skills and perspectives to forge constructive new [courses of action]."

'US, Israel Could be Engaged With Certain Opposition Groups in Iran'

Ghassan Kadi, a political analyst of Syrian origin, did not rule out the US-Israeli-driven regime change scenario in Iran.

© REUTERS / Raheb Homavandi/File Photo
US Iran Deal Pullout Was About 'Trump Wanting to Destroy Obama’s Legacy' - Prof
He noted that he "would not be surprised if Israel and the US are actually directly engaged with certain Iranian opposition groups, but any such groups would fall under the umbrella of 'controlled opposition,' and not genuine reformers."

"If a section of the Iranian community seeks a dilution of the powers of the clergy, political pluralism and liberalism, the change would have to come from within," he suggested.

Senior officials in the Trump administration have repeatedly made controversial statements regarding a potential "regime change" in Iran.

Would-be national security adviser, John Bolton, pledged to change the regime in the Islamic Republic at the gathering of the dissident group Mujahedeen Khalq, known as MEK, on July 1, 2017.

For their part, the incumbent Secretary of State Mike Pompeo, and Rudy Giuliani, a personal attorney to Donald Trump, have also openly discussed the regime change issue.

It is not the first time the US government has meddled in Iranian domestic affairs: In 1953 the US Central Intelligence Agency (CIA) had a hand in the ouster of Prime Minister Mohammed Mossadegh, according to the intelligence agency's declassified documents.

However, some US observers cast doubt on the potential move's efficiency: According to Stephen M. Walt, professor of international relations at Harvard University, attempts to fan unrest and instigate a regime change in the Middle Eastern state may end up achieving nothing.