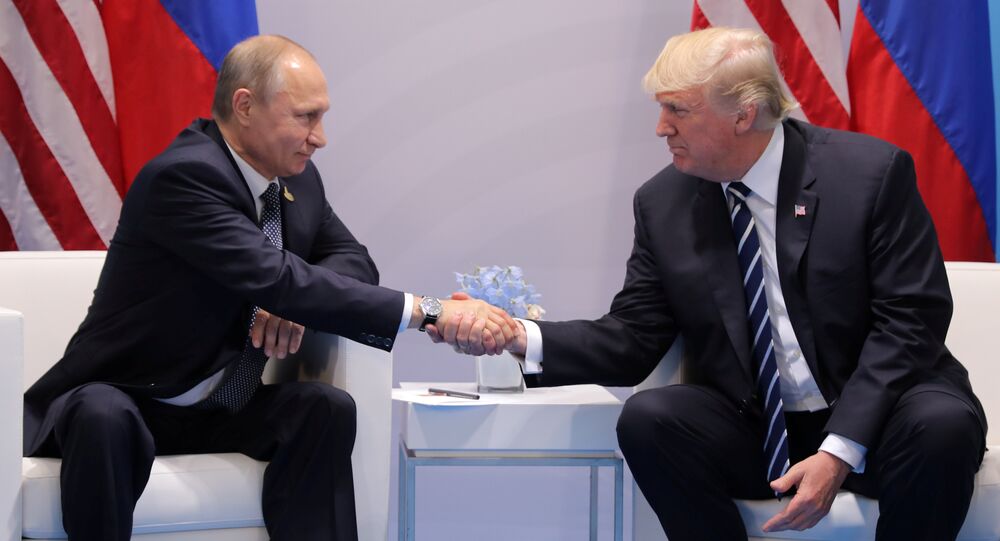 Washington and Moscow need to leave the past behind them and focus on the future, Israeli political analyst Avigdor Eskin told Sputnik, commenting on the upcoming July 16 Helsinki meeting between Russian President Vladimir Putin and his American counterpart Donald Trump.

"Look at the positive atmosphere during the current visit of US senators to the Russian Duma," the political analyst highlighted, referring to the US congressional delegation led by Senator Richard Shelby, a Republican from Alabama, who embarked on an official visit to Russia earlier this week.

Speaking to Russian Foreign Minister Sergei Lavrov, Shelby emphasized that Washington and Moscow "could have a better relationship" since the two countries "have some common interests around the world that [they] could hopefully work together on." The senator underscored, stressing that while being "competitors," Russia and the US "don't necessarily need to be adversaries."

"I firmly believe that the most painful question is the easiest one," Eskin opined. "The Americans were really deeply hurt by the alleged Russian meddling in the 2016 presidential election. But whatever happened there, there were numerous examples of the US meddling in Russian affairs."

Meanwhile, Washington has not presented any credible evidence of Russia's interference in the 2016 presidential race yet.

The Israeli publicist has drawn attention to the fact that since Donald Trump assumed the presidency, no attempts to meddle in Russia's domestic policies have been seen on the part of Washington yet.

"The sides should simply sign an agreement on cyber security and both will announce that there will be no more meddling against their countries. Very simple and very effective," the political analyst suggested.

Leaving the Past Behind

While answering the question whether the two sides would have to make serious concessions to each other to facilitate the thaw, the Israeli publicist remarked that such an approach is "completely wrong." According to him, the countries need to leave the past behind.

"I liked the statement made by the head of Jellyfish, an innovative economic diplomacy team in Washington, Michael Bagley," Eskin noted. "He said that both leaders should forward their thoughts to the future. There are great mutual economic opportunities for the US and Russia in Libya and in the Middle East. There are many matters which might be mutually beneficial. And I think that Bagley is right. The countries have a great future if they start moving there instead of dealing with old controversies."

© Sputnik / Sergey Guneev
June 27, 2018. Russian President Vladimir Putin and Assistant to the US President for National Security Affairs John Bolton, right, during a meeting in the Kremlin

Eskin sees the decision to exclude the Crimea issue from the agenda of the upcoming summit between Russian President Vladimir Putin and his American counterpart Donald Trump as an especially positive development.

"I think that the statement of [National Security Adviser] John Bolton that the sides 'agreed to disagree' is very constructive," Eskin underscored. "The Russian president made it clear that there is no place for any further talks on Crimea. And the administration of President Trump found a way to escape controversy here."

© Sputnik / Michael Klimentyev
'Russian Bear' and 'Infant Child': How Western MSM See Trump-Putin Summit
Following his June 27 visit to Moscow, Bolton told CBS that President Putin "was pretty clear" with him about the Crimea issue and the sides reached a compromise "to agree to disagree on Ukraine."

On July 3, White House spokesperson Sarah Huckabee Sanders reiterated that Washington and Moscow had "agreed to disagree" on the issue of Crimea's reunification with Russia in 2014, adding that Washington does not recognize "Russia's attempt to annex Crimea."

Moscow has repeatedly emphasized that it will never return Crimea to Ukraine as it was reunified with Russia as a result of a legitimate referendum held on March 16, 2014.

This was not the only "signal" apparently sent by the Trump administration to Russia ahead of the Helsinki meeting.

During the G7 summit that was held on June 8-9 in Canada, the US president opined that Russia should be re-admitted to the group.

Meanwhile, Trump's tweet regarding the alleged Russian meddling issue has become yet another "sign" of an apparent thaw: "Russia continues to say they had nothing to do with Meddling in our Election! Where is the DNC Server, and why didn't Shady James Comey and the now disgraced FBI agents take and closely examine it? Why isn't Hillary/Russia being looked at? So many questions, so much corruption!" the US president wrote on June 28.

Russia continues to say they had nothing to do with Meddling in our Election! Where is the DNC Server, and why didn’t Shady James Comey and the now disgraced FBI agents take and closely examine it? Why isn’t Hillary/Russia being looked at? So many questions, so much corruption!

​The Democratic National Committee's (DNC) server breach, groundlessly blamed on Moscow, became one of the major arguments for the Russian interference narrative. However, the Federal Bureau of Investigation (FBI) has yet to examine the server, still relying on a private firm's findings on the alleged hack. It seems that a thorough investigation into the issue could spell an end to "the Russians did it" story.

Assessing the US-Russian relationship, Eskin emphasized a stark contrast between the Obama and Trump administrations.

"The Obama administration had aggressively interfered in Russian internal affairs and had caused much trouble in the neighboring countries," the Israeli political analyst said. "President Trump does not do that. He understands that there are wide common fields of interests. Also, both sides agree now that Iran will have to leave Syria and Bashar Assad will remain the president there. There is no conflict of interests in Syria whatsoever."

Earlier, the Trump administration sent a strong signal to Syrian rebels located in the southern part of Syria, informing them that the US would not provide them with military aid amid the Syrian Arab Army's (SAA) advance.

In his June 28 interview with Sputnik, Eskin presumed that the SAA's southern offensive was "coordinated" between Moscow, Damascus, Washington and Tel Aviv under the condition that no Iranian or Hezbollah fighters would be deployed in close proximity to the Syrian-Israeli border.