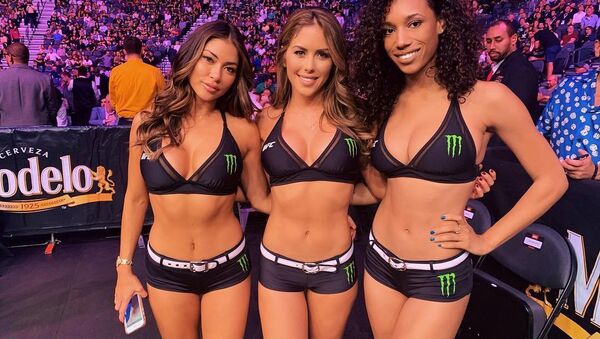 While all eyes were on the Russian native Khabib Nurmagomedov’s four-round battle against Irish legend Conor McGregor for the UFC lightweight title, these three stunning ladies may have stolen the show, taking over the Octagon between rounds in tiny shorts and bras.

Although F1 racing has placed a ban on grid girls, the UFC maintains its time-honored tradition of relying on scantily-clad beauties to announce rounds by parading with cards in the cage. The much-anticipated UFC 229 fight between Dublin-born Conor McGregor and Russia's Khabib Nurmagomedov, which took place at T-Mobile Arena in Las Vegas, Nevada, was no exception, featuring the best of the best among octagon girls: Arianny Celeste, Brittney Palmer and Brookliyn Wren.

Besides showing off and adding some beauty to the brutal UFC fights, the girls are making their modelling careers, posing for magazine covers and spicing up Instagram with snaps in bikinis, sexy dresses and lingerie. They've become celebrities themselves outside the cage.

One of the most high-profile UFC octagon girls, 32-year-old Arianne Celeste from Las Vegas, has worked for the championship for 12 years.

Celeste, who has been voted among Maxim’s Hot 100 several times, boasts a 3-million-strong following on Instagram.

Apart from being ring girl for the UFC and modelling, she’s also an aspiring contemporary artist, designer and performing singer.

Despite pursuing artistic ambitions, she has never given up modelling.

The third ring girl from the Khabib-Conor Fight is model Brookliyn Wren, who was welcomed at the UFC Octagon over a year ago. The 23-yearold Alaska native also shares snaps of her in-and outside-the-cage life on Instagram.

Having launched her career by competing in beauty pageants in Alaska, she’s now not only working for the UFC, but also doing calendar and clothing site shoots.

The youngest of the ladies is still building her modelling profile, and hopes to feature on the covers of Maxim and Sports Illustrated; now she's content to share snaps of her toned body on social media.