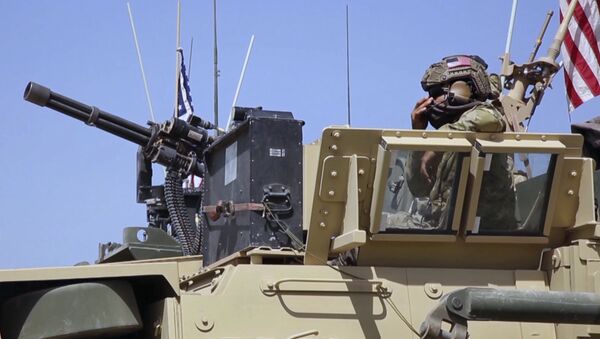 © AP Photo / APTV
Subscribe
Ekaterina Blinova
All materialsWrite to the author
Idlib, the last terrorist stronghold in Syria, has become a bone of contention for major global players, commentators of Syrian descent told Sputnik. While Washington is swiftly losing its grip in the region, terrorist-held Idlib remains the only justification for the US presence in Syria, they noted.

Tensions surrounding the Syrian Arab Army's upcoming Idlib operation continue to escalate amid reports of possible chemical provocations by terrorists and the US-led coalition's threats to strike on Syrian government forces in case poisonous substances are used in Idlib and elsewhere in Syria.

The US's fierce opposition to Bashar al-Assad's plan to liberate Idlib, home to up to 70,000 jihadi fighters including Tahrir al-Sham*, an umbrella organization for various terrorist groups, looks rather surprising given Washington's "green light" to the Syrian government forces' southern advance this June.

On June 24, Reuters reported that Washington had told Syrian rebels in the south that they should not expect it to provide any military aid to them amid the Syrian-Russian advance.

According to Ghassan Kadi, a political analyst of Syrian origin, there is no concrete strategy behind Washington's flip-flopping on Syria.

"America is supporting chaos and the perpetuation of bloodshed in Syria," Kadi told Sputnik. "If the messages America is giving are confusing, it is because they are meant to be confusing. Having said that, I believe that America itself is confused. Apart from not knowing who is really running the country and which government departments are working against each other, America no longer has a plan for Syria. It's original plan failed, and the only thing it can do now is to create more chaos."

Russia Calls on OPCW Not To Allow Provocation With Chem Weapons in Idlib – Envoy
Meanwhile, controversial signals continue to come from Washington with The Wall Street Journal dropping a hint that the White House did not exclude targeting Russian and Iranian positions in Syria in case Assad resorts to the use of chemical weapons.

Damascus's repeated signals to the US that it had destroyed all its chemical weapons stockpiles under the strict control of the Organization for the Prohibition of Chemical Weapons (OPCW) years ago seem to fall on deaf ears.

"American policies in Syria are akin to a schoolboy tossing between having to do his homework or having to go to bed. Neither option looks palatable," Kadi said. "America has supported jihadi militants all the way from the early Soviet days in Afghanistan till the recent events in Syria, in reality America is using those ideologically self-driven fighters to serve its own ends, but not to give them victory. But now America realizes that it has to choose between allowing either the Syrian-Russian side or the terrorists to win. Homework or bed. Somehow, America thinks that there could be a third option, one that suits its agenda, but in fact there isn't and, against its wishes, it will have to accept the inevitable fall of the terrorists in Idlib."

"As for threatening to target Russian positions, I frankly find this bravado quite laughable," he noted.

Attacking Syria Illegal, US 'Has No Right to be Judge or Prosecutor' - Author
It appears that the US is not alone in its unwillingness to solve the terrorist hotbed problem once and for all: Turkey is calling on its Astana format allies, Russia and Iran, to postpone the Idlib operation.

In an article published by The Wall Street Journal on September 11, Turkish President Recep Tayyip Erdogan urged the international community to prevent the Idlib operation. The report was published four days after a trilateral meeting between the Russian, Turkish and Iranian presidents in Tehran.

"Just like America, Erdogan is also looking for a winning score," Kadi presumed. "Thus far, he continues to be empty-handed after he was dreaming of entering Damascus as a conqueror. This is why he keeps a foot in every door despite his rapidly deteriorating bilateral relationship with America, also hoping that a resolution will emerge and which will give him some satisfaction. To this effect, he hopes that delays may provide such opportunity."

In contrast, Iran, Russia and Damascus want to strike the iron while it's hot, the analyst underscored. 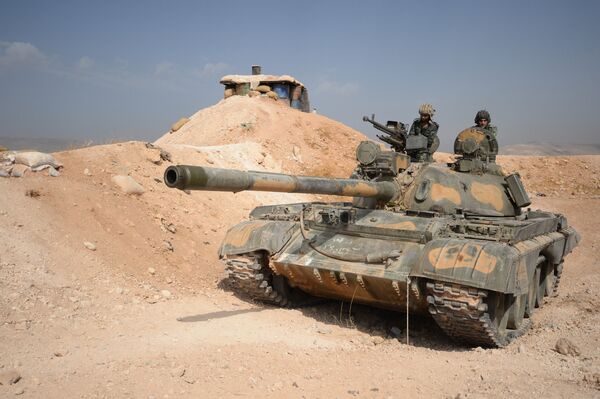 The crew of a T-72 tank of the 10th Division, 2nd Corps of the Syrian Arab Army are on combat alert off Katana, Damascus Province
© Sputnik / Mikhail Voskresenskiy
/
Go to the photo bank

'Terrorist Presence in Syria Makes US Boots on the Ground Necessary'

Christopher Assad, a Canada-based political observer and writer of Syrian origin, believes that "the elimination of terrorist organization in Idlib will deprive the US coalition of most of the cards it can play to pressure Syria, Turkey and the Kurds."

'Inevitable' Op: Why Russia, Iran, Turkey Need to Solve Differences Over Idlib
"The US and Turkey have thus far acted in a synchronous manner, with each move by either of them resulting in the other responding with a more egregious one against Syrian sovereignty and territorial integrity in Manbij, Raqqa, Deir-Ezzor, Qamishli and Idlib," he opined. "That whole area is so resource rich with agricultural and fossil fuels so much so that it constitutes the main lifeline of the Syrian economy. Syria cannot survive for long without its North and Northeast, let alone rebuild."

The terrorist presence in Syria makes US boots on the ground a "necessity" thus "justifying" Washington's illegal occupation of the country's territories, he explained, suggesting that the US has no incentives to leave the Arab Republic any time soon.

On the contrary, "Iran and Syria share with Russia the view that extremism in all its forms must be eradicated in the region because it poses a strategic threat to all the states of the region and beyond," Assad underscored.

"Russia has gone to great lengths to create de-escalation zones and encourage a solution based on a political settlement in Syria," he said. "For three years, the Russian state has incurred huge cost in blood and treasure in order to bring peace to Syria. It takes no genius to conclude that the Western threats to strike Syria, using staged attacks with chemical weapons by anyone will fall on deaf ears this time around, when practically all Islamic extremists are gathered in Idlib, a province that has always been an incubating chamber of Islamic extremism."

Staged Filming of Mock 'Chemical Attacks' Has Begun in Idlib - Russian MoD
According to the political observer, this time "the hardened position of the West is likely to be confronted with a much harder position by the winning Axis of Resistance, backed by Russia, India and China."

He opined that "if the US miscalculates and strikes Syria this time around" it may reap the bitter fruit of its decision.

Meanwhile, addressing the Geneva summit on Tuesday, the Russian special presidential envoy for Syria, Alexander Lavrentyev, called upon the international community to be "very careful and balanced in its assessment in case of this possible provocation, which could serve as a basis for the Western coalition to carry out new missiles strikes on Syria."

The same day, a meeting on the Syrian crisis was held by the UN Security Council at the request of Moscow.

On September 12, the Russian Defense Ministry reported that the notorious White Helmets and terrorist groups had selected children to stage a chemical attack and blame it on the Syrian Army in order to trigger the US-led coalition's "retaliation."

Earlier, the White House signaled its suspicions that Assad could "again" use chemical weapons against Syrian civilians and threatened to "strongly respond" to the potential assault. The Trump administration had attacked the positions of Syrian government forces twice under the pretext of unconfirmed reports about the use of poisonous substances in Khan Sheikhoun in April 2017 and Douma in April 2018.

The views and opinions expressed by the contributors and do not necessarily reflect those of Sputnik.