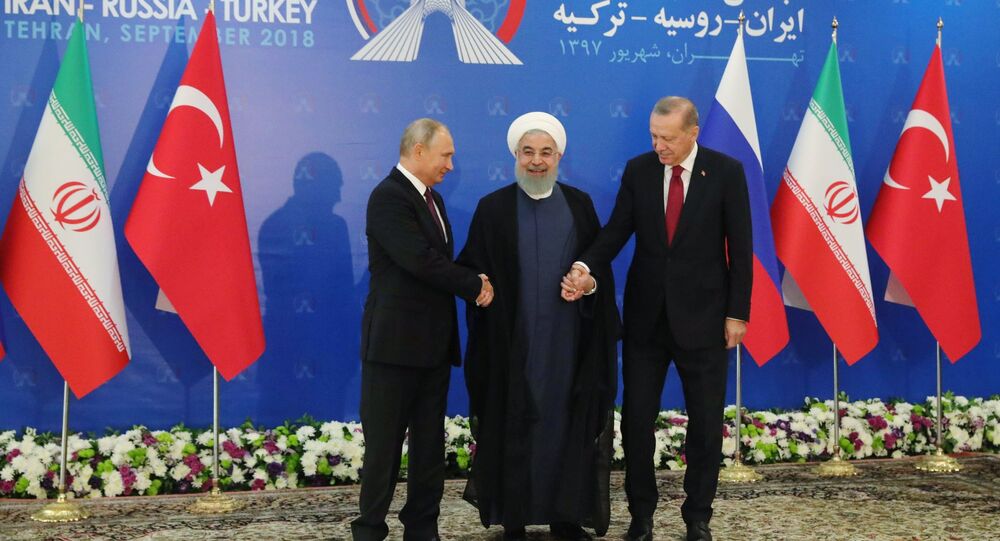 The presidents of Russia, Turkey, and Iran are meeting in Tehran on Friday for the third trilateral summit to discuss the situation in Syria.

Russian President Vladimir Putin stated during the meeting in Tehran that terrorists in the rebel-held Syrian city of Idlib are preparing provocations involving chemical weapons.

"The remaining groups of extremists [in Syria] are currently concentrated in the de-escalation zone in the province of Idlib. Terrorists are making attempts to disrupt the ceasefire, moreover, they are carrying out and preparing various kinds of provocations, including using chemical weapons," the Russian President stressed.

He also noted the significant progress in ensuring long-term normalization in Syria.

"I would like to note that the decisions of the two previous summits of the guarantor states of the Astana process are being successfully implemented, and significant progress has been achieved in ensuring long-term normalization in Syria," Putin said.

The Russian President agreed with Turkish President Recep Tayyip Erdogan’s proposal to declare a ceasefire in Syria's Idlib but underlined that it's impossible to talk for the groups that were not present at the meeting.

"There are no representatives of the armed opposition at the table and, moreover, of the Nusra Front* and Daesh*. I believe that the Turkish president is generally right, it would be good. But we cannot say for them, and especially we cannot say for the Nusra Front and Daesh terrorists that they will stop shooting or stop using drones with bombs," Putin said during the discussion.

He also noted that the text was made very "diplomatic."

Iranian President on the Situation in Syria

Addressing the issue, Iranian President Hassan Rouhani said that the civilian population in Idlib should not suffer during counter-terrorism operations.

"Fighting terrorism in Idlib is an integral part of the mission of establishing peace and stability in Syria, and civilians should not suffer from this fight," Rouhani said at the summit.

"The only goal in Syria and the region can only be peace, but to achieve sustainable peace, a serious fight against terrorism is inevitable," the president added.

READ MORE: Iran: US Blames Us for ‘Horrors' of Its Own Creation Across Middle East

He also urged Israel to leave "the occupied Syrian territories," and criticized the US presence in the country.

"It is absolutely clear that the United States is present in Syria illegally and is only fueling aggression and supporting terrorist regime [there]. And its positive role in the Syrian process can hardly be expected. [The US] presence only exacerbates problems, and hampers the achievement of sustainable peace in Syria," Iranian president emphasized.

Turkish President Tayyip Erdogan said, in turn, that Ankara is "extremely annoyed" by the United States' support of Kurdish YPG in Syria.

Addressing the situation, he confirmed that Ankara would continue its military operation in Syria until the country reached integrity, also adding that Turkey would not tolerate any threats to its territory emerging from Syria.

"Turkey is decisively determined to maintain its presence in the region until Syria's territorial, political and social integrity is ensured," the Turkish President said ahead of the summit.

He also noted that it is possible to relocate militants, who attack the Russian Hmeymim airbase, from Idlib to other areas.

"We believe that we can try to remove these elements, which bother our Russian friends and pose a threat to Hmeymim, to more remote places," Erdogan said at the summit.

He proposed declaring a ceasefire in Syria's Idlib, stopping attacks on this province.

"As for the bombings, I think it will be useful to declare a truce because the population of Idlib is seriously suffering, the bombing is a threat to [the civilian population]… On the one hand, a ceasefire, and on the other — measures that should be applied to terrorists. I believe that our relevant bodies will hold meetings to ensure an appropriate ceasefire," Erdogan suggested.

The Turkish head of state stressed that the situation in this province of Syria, which is important for the security of Turkey, had reached a dangerous point.

"Many of our soldiers were killed. We put a lot of effort, but despite this, the situation [in Idlib] is exposed to various risks. Idlib is considered not only geopolitically [important] for the future of Syria, but also for the security of our country," he said.

Erdogan also warned that the operation of the Syrian army in the region could lead to a humanitarian disaster, adding that his country was no longer able to receive refugees from Syria.

The Turkish President concluded by saying that the next trilateral meeting would probably be held in Russia.

© AFP 2021 / Anas AL-DYAB
Most of Syria's Idlib De-Escalation Zone Still Controlled by Militants – Moscow
The situation in Syria's northwestern Idlib province, the last major terrorist stronghold, has been the key topics at the summit. According to the Kremlin, the insurgent hotbed in Idlib destabilizes the situation in Syria and undermines work toward a political settlement of the conflict.

Russian officials, moreover, have repeatedly warned that terrorists were planning a false-flag chemical weapons attack in Idlib with the aim of provoking Western retaliation against the Syrian government.

*Daesh (also known as Islamic State, ISIS, ISIL or IS) and Nusra Front, are terrorist organizations, banned in Russia.