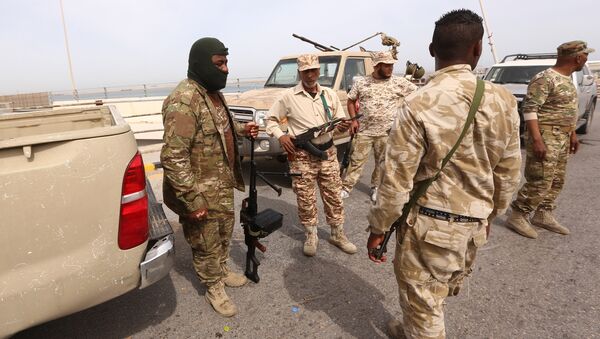 © AFP 2021 / MAHMUD TURKIA
Subscribe
Global players should sit down at the negotiating table to facilitate a resolution of the Libyan crisis, Gianfranco Damiano, the president of the Italian-Libyan Chamber of Commerce, told Sputnik Italy, emphasizing the role of Russia and the US as potential brokers.

Since the end of August, Tripoli has been engulfed by violent clashes between the military forces of the internationally recognized Government of National Accord (GNA), headed by Fayez al-Sarraj, and the "7th Brigade" militias.

On September 9, the rival groups agreed to establish ceasefire, according the UN Support Mission in Libya (UNSMIL).

Commenting on the truce, Gianfranco Damiano, the president of the Italian-Libyan Chamber of Commerce, expressed hope that the agreement would be respected by the warring parties. He pointed out that France was trying to gain an advantage over Italy with regard to Libya.

In November, Italy is due host a conference on the situation in Libya. However, Paris' game in the region could affect Rome's plans.

"On the one hand, perhaps, Italy should have brought this issue to the European level and insisted that Brussels give its response," the businessman told Sputnik Italy. "The French decided not to wait for the European Union, and [Italy] had failed to promote its foreign policy there over the years. And it is undeniable that the influence of France is spreading precisely because we have left these territories. And here are the consequences."

Ceuta Onslaught: How Gaddafi's Grim Prophecy for Europe is Coming True
Still, according to Damiano, Libya's strategic importance for Italy could hardly be overestimated: Besides the problem of migrants flowing through the war-torn country into Italy, the country's vast oil reserves and challenges Italian companies are facing in the North African state, Libya could become a crucial hub for trade between the northern and southern Mediterranean.

"For us, Libya can become an important hub for trade with the north and south of the Mediterranean region," the businessman underscored. "We have every reason to rely on this hub. In southern Libya, we have a potential 250 million people market. But we should consider Libya not only as a market, but also as an entry point to other African markets to boost the development of Italian trade in Africa."

Since 2011, Italian companies have found themselves in a critical situation: Libyan firms owe almost $600 million to their Italian counterparts. According to Damiano, the Italian government should find a way to support them.

"The Libyan market is very important for us, but we are unable to build stable business with Libyan companies," he noted.

Trump Setting Italy, France on Collision Course Over Libya – Journalist
However, the ongoing tensions in Tripoli pose a challenge to Italy's policy in the region. A mortar shell was fired near the Italian Embassy, which prompted speculations about the evacuation of the Italian diplomatic mission, later denied by Rome.

Additionally, the Italian media have reported that radical groups in Libya had burned the Italian flag. Il Giornale noted that terrorists threatened to attack the Mellitah energy complex, run by Eni, an Italian oil and gas company, which pumps gas to Sicily.

Given Italy's support to the GNA, an anti-Sarraj uprising could play into the hands of France. Currently, up to 400 Italian troops are deployed in the Libyan city of Misurata under an agreement concluded by Rome and the GNA.

Brussels Should Step in to Solve Libyan Crisis

The businessman suggested that Brussels should adopt a consistent approach to the Libyan crisis and engage in negotiations with warring parties on the ground.

He noted that the creation of jobs could have become a step in the right direction.

"An important moment for stability in Libya is work," Damiano insisted. "To prevent young people from taking up arms, one needs to offer them opportunities, that is, to create jobs for them. One should create conditions for the development of small and medium businesses. Our production capacity is largely made up of small and medium-sized companies that can easily find appropriate trading partners in Libya."

The president of the Italian-Libyan Chamber of Commerce underscored that besides military and security solutions, Libya needs an economic program which would help solve the problem of unemployment and restore the country.

Russia: Guarantor of Peace from Algeria to Syria

"The Russian presence is, of course, an element of stability," Damiano opined, commenting on Moscow's potential role in untying the Libyan knot. "[Russia] is the guarantor of peace on the territory from Algeria to Syria. The expansion of the range of actors engaged could reduce tensions. But Russia and the United States should cooperate more to find solutions that could stabilize the situation in the country. No issue can be resolved without Russia and the US."

According to the businessman, Russia is actively playing its part in the Mediterranean. In contrast, Washington's presence in the region has faded, he believes.

Referring to the July 30 summit between US President Donald Trump and Italian Prime Minister Giuseppe Conte, he said: "Trump told Italian Prime Minister Conte that it is Italy who should be at the helm of Libya's [peace resolution], and this indicates how the US administration is uninterested in the region." At the meeting in Washington, Conte announced that in November Italy would host a conference on the situation in Libya.