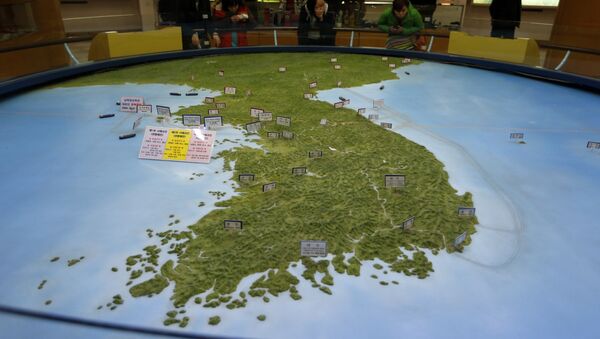 "Russia has played a constructive role in inviting North Korea to dialogue, and we hope that Russia will play such a role in the future. We will undoubtedly cooperate in this area with Russia," Chung Eui-yong said following a meeting with Russian Foreign Minister Sergey Lavrov in Moscow.

The South Korean diplomat added that he and Lavrov agreed on joint actions to ensure the success of upcoming meetings between the leaders of South and North Koreas, as well as the US-North Korea summit.

Earlier in the day, the Dong-A Ilbo newspaper reported that Kim spoke about the intention to normalize relations with Washington during a meeting with a South Korean delegation in Pyongyang, noting that his final goal was to sign a peace agreement with the US and establish diplomatic ties, possibly including the opening of a US embassy in Pyongyang.

Meeting With Trump: Kim Wants 'to Show N Korea is Normal Country' - Prof.
On Thursday, US President Donald Trump accepted the invitation to meet with Kim by the end of May following months of heightened tensions and exchanges of frequent military threats between the two leaders. Donald Trump said later that he expected "tremendous success" in solving the North Korean issue, saying that he expected Pyongyang to cease its ballistic missile and nuclear tests as well as denulearize.

Moscow welcomed the announcement of a possible meeting between US President Donald Trump and North Korean leader Kim Jong-un as it is needed for the settlement of the nuclear crisis on the Korean Peninsula.

Meanwhile, a thaw in relations between the two Koreas began to show signs of life. Earlier in March, Chung Eui-yong, national security adviser to South Korean President Moon Jae-In, said following the meeting with North Korean leader Kim Jong Un in Pyongyang that the two countries had agreed to hold a summit in April.

Will North Korea Agree to Drop Its Nuclear Program? Expert Explains
In January, Seoul and Pyongyang resumed bilateral talks ahead of the Pyeongchang Winter Olympics. The two sides agreed that the national teams would march together under a "unification flag" at the opening and closing ceremonies and that the North Korean athletes would participate in alpine skiing, cross-country skiing, pair figure skating, and women's ice hockey events.

The rapprochement on the Korean peninsula followed months of escalating tensions caused by Pyongyang's missile and nuclear tests carried out in violation of UN Security Council resolutions.